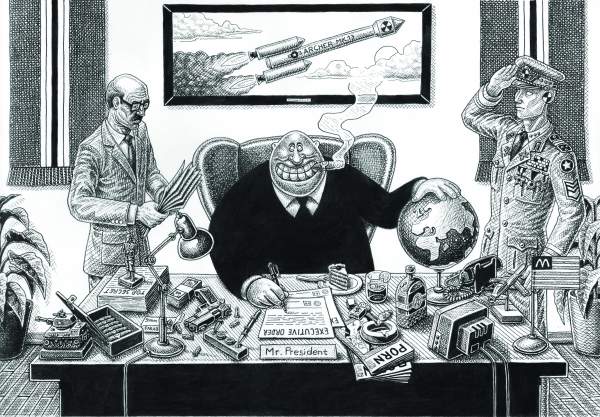 President, by Aleksandar Todorovic. Image courtesy of the artist.

I want a dusty screaming peacock.

Can his whiii, whiii whiii or pik pik pik be worse
than the shatter noise the emperor makes when he grabs the ring,
or the gunshot next door, and the horses run.

After while I’d not hear his screams, like the ocean
they would soothe me and when I least expect it, maybe his sapphire head
is under a peony bush, his dusty tail feathers writhe, shiver gold,

a cosmos of iridescence, green in the haughty, rising, omnificent, his eye outlined white.
The pure fantasy of it.

The Missing Slate’s literature team brings you a selection of love poems for Valentine’s Day.

"Escape Artists is a representation of my brain's thought patterns. I love all art forms and have always enjoyed experiencing...