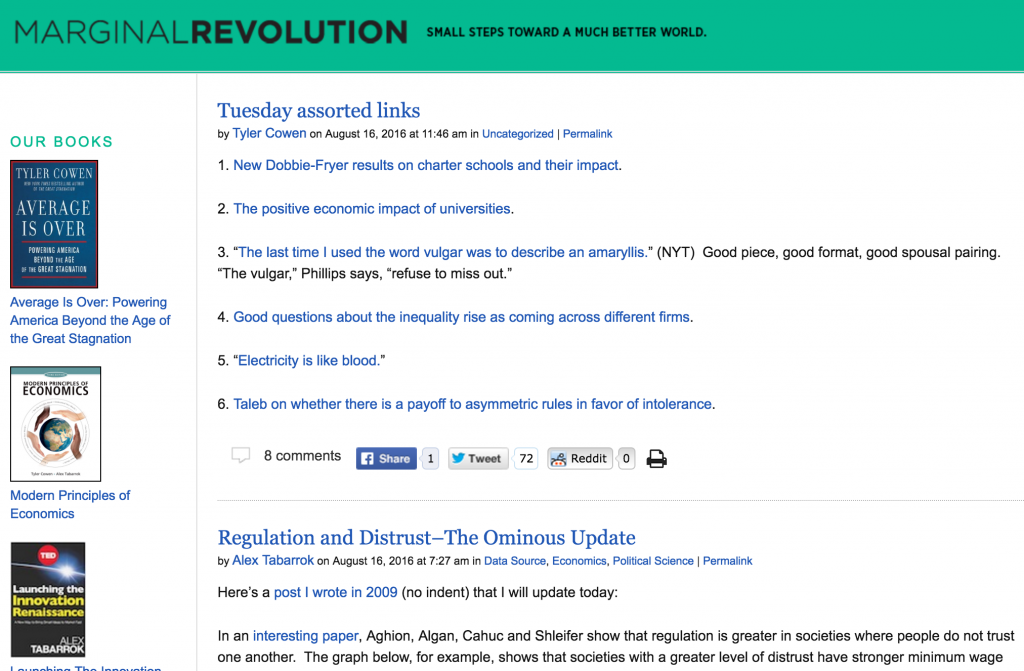 When we are very young, intelligence approximates to processing power. Raw data from the world streams into our senses, and our brains deduce rules from it.

When we are older, approaching middle age, intelligence approximates much more to memory. Our brains recall and manipulate the information that has passed through our senses in the decades gone by. The intelligent person conjures analogies, connections, precedents, where the average person blanks out.

I am sure Tyler Cowen is one of the most intelligent people in the world on processing power alone. If you put him on an alien planet, the aliens would appoint him to a university chair, based on his local learning, within a year.

To say that Tyler Cowen wears his learning lightly is an understatement; it would crush anybody else to the ground.
Here on Earth, with instant recall of everything that he has learned in almost five decades, thanks to a photographic memory and an aversion to alcohol, Tyler Cowen is, by my reckoning, the single smartest person in the blogosphere. His only serious rival for that title was Hilary Putnam, and, unlike Hilary Putnam, Tyler has the gift for rendering difficult ideas in plain English.

To say that Tyler wears his learning lightly is an understatement; it would crush anybody else to the ground. One of the constant joys of Marginal Revolution, the blog that Tyler writes jointly with his university colleague, Alex Tabarrok, is that both have the gift of brevity. Whenever I read a post on Marginal Revolution, I always want to read more. Tyler and Alex always leave something on the table — which is perhaps why they have probably the finest commenting readership anywhere on the Internet. You can learn more from the comments on Marginal Revolution than you can from reading most national newspapers.

I think of the relationship between Tyler and Alex as being like that between Penn and Teller, with Tyler as Penn and Alex as Teller. Most of the time you are looking at Penn; but you know that Penn himself is in awe of Teller. It’s hard to say whether the engine-room of the act is in Penn’s virtuosity or Teller’s restraint.

If you have to slap a category label on Marginal Revolution, then call it an economics blog. But economics is a collection of insights, not of natural laws, and Marginal Revolution is the application of those insights to the world at large, with particular reference to politics and public choice alongside (obviously) economics and finance.

Marginal Revolution may well be the finest blog ever; if we wanted to put a blog in the Smithsonian to show future generations what happened when smart people in our time spoke their minds, then Marginal Revolution would be my choice.

And yet, perhaps that very insistence on the eternal virtues of Marginal Revolution betrays my fear that it is too good to last. I see that Tyler has been persuaded to write a daily column for Bloomberg View, and that worries me. Does the Bloomberg economy produce psychic returns that the blog economy does not? I do not know. But even the fact that I think in those terms marks me out as a reader of Marginal Revolution.

The Missing Slate’s Ghausia Rashid Salam tears through the Grimm fairytales, empowering the damsel in distress with television’s Once Upon a Time.

"This blonde and grey-eyed woman,/ her fingers combing a prisoner’s hair/ in a barn, a field, a hidden somewhere/ in...