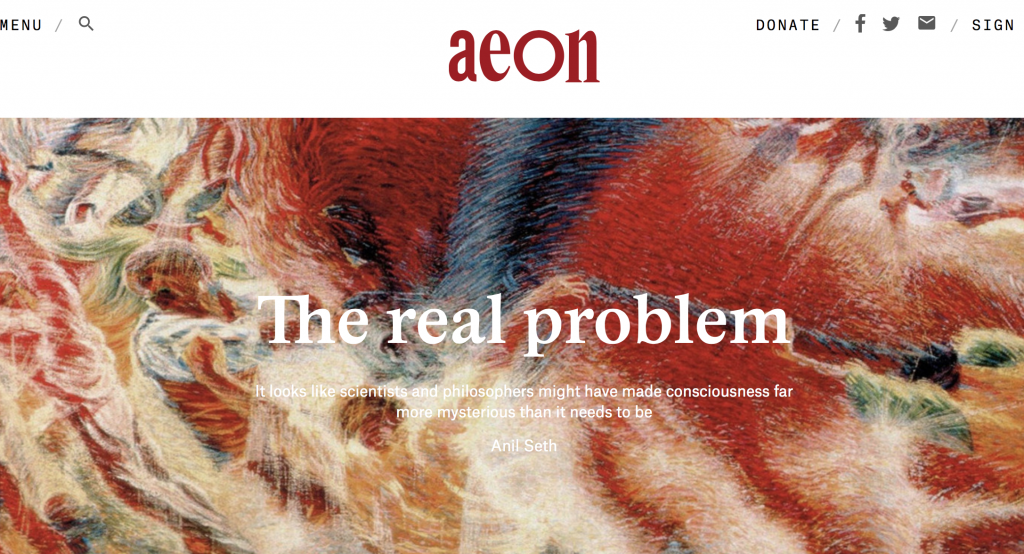 I borrow the form of the poem from Adrian Mitchell, who did it much better. But the point remains. Whatever horrors the Internet has unleashed into our social and cultural lives, whatever it has taken away from our dignity and our decency, it has given much, too. And one of the exemplary things that it has given us is Aeon, a site devoted to elegant writing and serious thinking, mostly about philosophy and the human sciences.

When I say that the Internet has given us Aeon, that is not quite the full story. The Internet has given us Aeon by means of the persons of Paul and Brigid Hains interposed. They co-founded the site in 2012 and created its distinctive sensibility. There is an exciting hint of New-Ageiness about Aeon, a sense that life relies on rituals as well as rules; which is well explained when you see from Aeon’s People page that Paul has an MA in the psychology of religion, and that Brigid lists anthropology first among her interests.

It would not be an unfair summary to say that Aeon is about life’s mysteries. Today’s front page, as a I write, offers a lead piece on the philosophy of consciousness; another on alien intelligence; a discussion of alternatives to the Aristotelian account of human virtue; and an outstanding essay on probability which you really should read if you want to understand the current crisis of replicability in scientific research.

I am tempted to say that another one of life’s mysteries is Aeon itself. Was it sent here from another planet on a civilising mission? How and why does it go on publishing these wonderful articles with no apparent thought even to revenues, let alone profit? I see from Wikipedia that it registered this year as a charity in Australia; and I can only guess that this was the honourable conclusion of a four-year attempt to find a more conventional business model. I’m also going to guess that Paul Hains has the deep pockets which have kept Aeon going, and if so he deserves at least a knighthood for doing so.

It may be just me, but when I try to think of the best new publications which owe their lives to the energy of the Internet, they are all in the general area of popular science. I will hope to come to them individually in due course, but in addition to Aeon I am thinking particularly of Nautilus, Mosaic Science, and Quanta. Nautilus is a commercial venture, I believe; the others are philanthropic.

This is the opposite of dumbing-down. This is smarting-up
Why should this be? Why should we have had this flowering of fine new writing in popular science — but not in, say, history or drama (at least to my knowledge)? I’m going to guess that it’s partly because explaining science to people feels useful, and so satisfies the philanthropic impulse; and partly because there are huge commercial returns to successful science, which allows the Wellcomes of this world to set up foundations, which — well, what do you expect? — seek further to elevate the public standing and understanding of science.

But also, perhaps — and I am moving on to thin ice here — we have a boom in popular science writing because all you need in order to enjoy articles about popular science is a lively awareness of the world around you. No book-reading required.

It is a wonderful liberation, in its way. Like the Ancient Greeks, we can come fresh to ideas without first ploughing through the associated scholarship. A couple of decades ago I would have felt preposterous advancing an opinion on quantum neuroscience — but now Quanta has me covered. I would have assumed that I needed several years of lab work to hold any views at all about the biological definition of a species —  but in fact, all I need are ten minutes with Nautilus.

This is the opposite of dumbing-down. This is smarting-up. In the absence of Aeon I would not read more demanding pieces about science, I would simply read less science, or none at all. Aeon makes me smarter. Why Paul and Brigid Hains should wish to do me this kindness I am hard-pressed to explain, but no doubt there are some pieces about altruism in the Aeon archive which will do the job.

"Inside is a black verse. Black like the womb of a deep river/ too black for this porcelain room..." Poem...