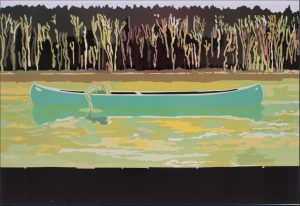 Untitled by Kim Yunsub. Image courtesy of the ArtChowk Gallery.

It was late when Silje Rash rode into Reno. A waning sliver of moon hung in the gangrenous sky above her, destined to relent into darkness over the coming nights. Only the false dawn of electric street lamps kept the shadows at bay.

She slipped her gnarled hands free of their mittens and tried to rub them back into use. The chill autumnal wind had taken its toll on her worsening rheumatism over the half-day journey from Virginia City.

As her stalwart blue roan Morgan, Jenny, rocked beneath her along the rails of the new streetcar line, a cry pierced the charnel night.

Rash reached for her worn Colt pistol out of habit, but stopped short of drawing it. Reno was a respectable place—a proper town, with electricity and sewers and running water. It was a place for a crippled old gunslinger to domesticate herself and wait for the end, not for shootouts and vigilantism. They’d even outlawed outdoor privies.

Out from the haze in front of her emerged the new bridge that spanned the Truckee. The old iron-arched workhorse that had graced the river banks for decades had finally given way to the modernity of concrete. On the other side of the bridge, Rash knew, stood Mrs. Tolliver’s Boarding House for Aged Ladies. Her destination. Her gallows.

A second shout off to her right gave Rash an excuse to put off Mrs. Tolliver for a spell, so she brought Jenny up to a trot, stopping at the mouth of a poorly lit side street. There, at the fading edge of the nearest street lamp, stood a huge walrus of a man with one one enormous hand wrapped around the collar of a young Coolie girl and the other poking at the chest of a shrinking codger.

The fat man’s eyes darted to Rash, sizing up her breasts and silver hair and immediately dismissing them. His attention returned to the codger.

“No more excuses, Peasy,” he said, jerking the girl against his stained shirt. “I’m collecting on what you owe me.”

“Please,” the old man said, dropping to his knees. “She’s my niece.”

Rash shook her head. She could only see the codger’s back from her position, but his weakness sickened her. Pleading words might bend ears, but fists could break both faces and resolve.

“She don’t much resemble you,” the big man said, caressing the girl’s tender cheek with a rough and calloused hand. “But, niece or no, she’ll fetch a nice price in San Francisco with them pretty green eyes.”

Rash winced. Whatever this was, it was none of her concern. She glanced toward the bridge. The boarding house had expected her hours ago.

As Rash debated her next move, the girl screeched in defiance and drove her flimsy knee into the big man’s nethers with a quick twist of her body.

He bent in half at the waist with a grunt, but kept a firm grip on her collar. Scarcely had the air left his throat when the sound rolled into a deep belly laugh.

“You punch like a girl,” he said, then swung his fist into her little belly.

“No!” the codger screamed as the girl dropped in a heap to the swirling dirt.

Rash mouthed a fresh handful of cloves from her pocket to calm her aching teeth and slipped from the saddle.

“Is that any way to treat a perfectly fine girl?” she asked.

The fat man turned to her with fire in his eyes. “She ain’t a girl. She’s a Chinkie whore. Or will be soon enough.”

In a flash, the big man fell upon her. His hand was hard as granite as it cracked across her face. She collapsed much like the girl had, a silly old woman overstaying her welcome in a young man’s world.

Rash caressed her horse’s shoulder. “Jenny here may have four hooves and a tail, but that don’t give me cause to abuse her.”

“Who asked you for your opinion, you old crone? Go back to your sewing circle.”

She smiled and felt the trail fatigue lift from her shoulders. “I go where I please, when I please it.”

“Then you’ll be pleasing to move on,” he replied, opening his coat to show off one of those new cartridge pistols.

Rash freed her Colt and trained it on his fat face. “I’m inclined to disagree,” she said.

His scowl became a grin as he forgot about the kid and the codger and took a step toward her, accepting her challenge.

The Colt wavered in Rash’s grip, her troubled joints acting up after the long ride.

“Know how to use that thing, grandma?” he asked.

“Take another step and find out.”

The man hesitated, troubled by her words. Then he laughed.

“I don’t think you’ve gotten the full measure of who you’re tangling with here,” he said.

“Then you better get gone before I measure out nine tangled yards from that voluminous paunch of yours.”

He laughed again and took a step toward her. Cemeteries were full of those who’d died for less.

She slipped her finger onto the trigger.

Or rather, she tried.

For the first time in her life, her trigger finger let her down. Pain she could handle—she had laudanum for that—but this was different; her finger plum refused to move.

Like some summertime greenhorn, her eyes darted to the pistol, as if the problem rested with it instead of her failing body.

That was all it took.

In a flash, the big man fell upon her. His hand was hard as granite as it cracked across her face. She collapsed much like the girl had, a silly old woman overstaying her welcome in a young man’s world.

When she regained her faculties, she chanced a glance upward. The man towered above her, inspecting the Colt he had stripped from her hand as she fell.

“What museum did you lift this piece of shit from?” he asked.

Before she could answer, he turned his back on her and walked over to the crumpled form of the kid.

The big man smiled and tossed the Colt to the dirt in front him.

“Do something about it,” he said, then wound the girl’s black hair around his fist twice and dragged her toward Jenny and the main thoroughfare.

Rash glared at the old man, her cheek hot and sore for refusing to turn the other one.

“Shoot him,” she whispered.

Tears streamed down from the codger’s pained, impotent eyes. Rash followed his gaze to his hands — which were conspicuously absent, taken with his arms above the elbow. He was more useless than she was.

Brian KoukolfictionStory of the Week

Poem of the Week (April 9), by Desmond Kon Zhicheng-Mingdé

"This is the opposite of dumbing-down. This is smarting-up..." Robert Cottrell on Aeon and the proliferation of wonderful writing in...