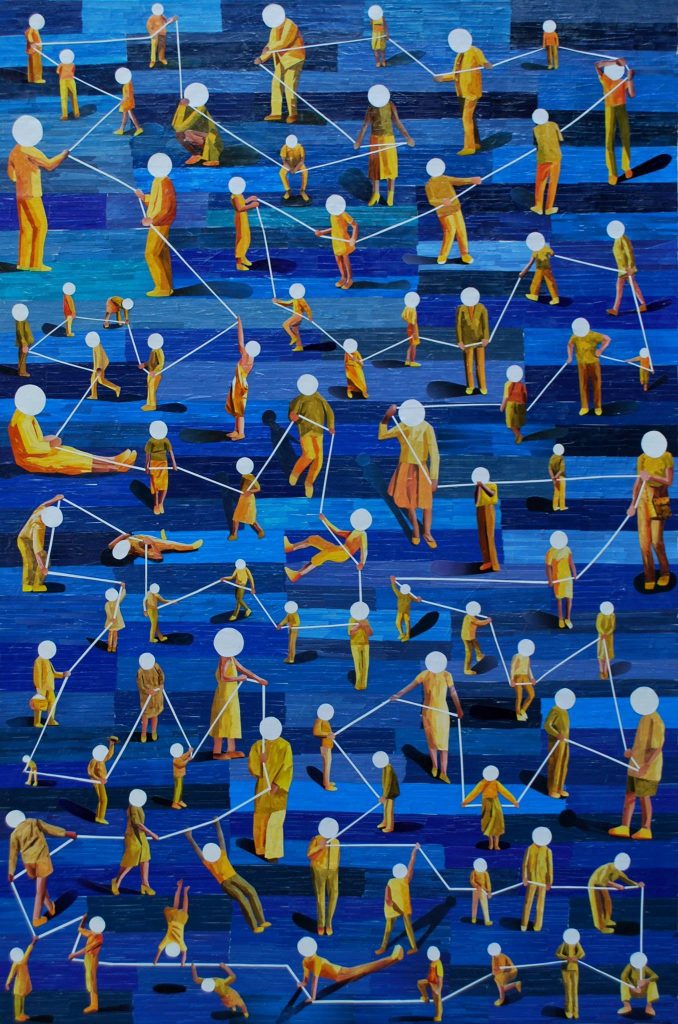 It was the summer my father was in the hospital. The year was 1993. I was eight years old, excited to be reunited with my parents after my father had been posted from Sahiwal to the more developed Abbottabad.

There was a sense of familiarity in Abbottabad, after having attended boarding school in Murree. Both hill-stations, with a colonial influence still evident in the houses in grey stone so common to army cantonments in northern Pakistan from the time of British rule. The smell of pine needles in the air, the stars out in stark abundance at night, the coal-roasted challiyaan[1], and the soft drizzle of the rain that I had become accustomed to and missed whenever I travelled southwards in the holidays to be with family.

As I mentioned, my father was in the hospital. I was not sure exactly why. My mother only said he was sick, too sick to see me. She would leave to tend to him at eleven in the morning and return at seven every night.

“Soon,” she would respond, giving me a tight smile and a tight, short hug.

I eventually gave up asking her, accepting with a child’s philosophical approach to life that, in the meantime, other pursuits must be found.

While fond of him, I was not too close to my father on account of his being so occupied with his duties as an army officer, and my own enrolment at boarding school. While I was certainly in awe of him, particularly his uniform and imposing moustache, our father-son bond had not yet had much opportunity to strengthen. Apart from the odd game of cricket that he would play with me during the holidays I had been with him, I had few memories of time spent together. It was my mother whose presence I missed most, whose comforting warmth I had been looking forward to before I came back to her. I soon accepted her absence in those couple of months of my father’s convalescence, however, since I had been used to being without her at school, after all.

I had been used to being without many friends as well, for that matter. While swinging on our creaky, weathered front gate in the evening, waiting for my mother to return, I would often catch sight of other children chasing each other or playing various games in the street, their laughter mingling with the rustle of pine trees. Many a time they would go off in a group, presumably to a nearby park, always with someone’s officially appointed batman[4] accompanying them. They caught me observing them a few times, but did not venture to include me in their games. On my part, I felt too shy to initiate any introductions.

I was more or less a solitary child, albeit an active one. There was no corner or hedge of the pretty little sun-dappled lane we lived on that I did not explore that first summer; no stray dog that I hadn’t tried to play with and which, misunderstanding my intentions, would run away with a woebegone tail between its spindly legs; no climbable tree that I had not conquered.

I was left largely to my own devices. This meant that I could indulge in the kind of pursuits I revelled in: making mud pies and climbing the apple tree in our backyard, stacking pinecones for bonfires that I never lit, trying to catch frogs and putting salt on unsuspecting slugs to see whether they would really turn to foam or not.

My mother would return to grass-stained knees, scraped elbows and a horde of questions and stories every night.

“Ammi, if I jumped from our wall on to the roof, would that make me like Superman?”

“Ammi, today I turned over a rock and a scop…no, a scor…scorpion came out from underneath and it had lots of little babies too! I tried to put the rock back but they almost ran up my arm!”

“Ammi, what does this word mean?” I let out an expletive, my mother’s jaw dropping in horror. “I heard the next-door batman call Salim that.”

A few days of this caused my appalled mother to promptly turn to other potential chaperones.

The first was my father’s batch-mate and his family, who lived in the lane next to ours.

“Danial, beta[5],” my mother informed me one morning. “I’m going to leave you with Nasreen Aunty every day before going to the hospital, and pick you on the way back. It’s just for a week or so, before Farhat Phupo[6] comes to stay and help. Now you have to be a good boy, it’ll be just fine. Nasreen Aunty’s children seem very nice. You’ll have good friends.”

My mother’s prediction was undone on my first day at Nasreen Aunty’s. Nasreen Aunty, while very kind to me, more or less left my entertainment up to her three children.

Adil, Nasreen Aunty’s oldest son, looked at me with disbelief and all the superiority of an eleven-year-old surveying someone much younger than himself.

“You can’t do a headstand?”

“I can do cartwheels,” I replied defiantly.

“Any baby can do cartwheels! Even Fatima can do those.”

Fatima, the bug-eyed youngest sibling of Nasreen Aunty’s brood, stared at me unsmilingly. She was six years old. I was slightly disconcerted but not deterred.

“I can do fast bowling.”

I was tossed a tennis ball covered in red duct tape. Adil’s younger brother, Umar, sauntered over to the other end of the lawn and angled his cricket bat in expectation.

I ran. I swung my right arm with all my might. Thwack! The ball flew over the roof of the house and into the lawn next door. Adil and Umar collapsed with helpless laughter. For the rest of the day I was condemned to sit on the side, permitted only to watch the boys play.

The next time Adil and Umar ventured off to play baraf paani[7] and cricket with their friends in the neighbourhood, I found myself unceremoniously left behind. I had no company except Fatima, who would take out the same plastic tea-set in pink every day and repeat the same tea-party with her favourite doll with the blond curls and lazy left eye in an unnervingly solemn manner.

This happened the next day as well. And the next.

On the fourth repetition of this routine, I slipped out behind Adil and Umar, taking good care not to be seen. I felt unbearably homesick. Being alone was infinitely preferable to sitting through another performance of Fatima’s innovatively-named doll Gurya[8] having tea and cake.

Clutching my small, wooden bat and tennis ball, I turned onto the now well-known road leading to my street. My house was barely a five minute walk away.

My mother, frantic with worry, hurried up to our house in the evening along with Nasreen Aunty’s husband, where she found me swinging on the front gate. She choked on a sharp reprimand the minute she saw my tear-stained face.

[1]Challi = corn on the cob [2] ‘Father’ in Urdu. [3] ‘Mother’ in Urdu. [4] An orderly or personal attendant appointed to serving army officers. The term ‘batman’ in the Pakistan Army is a remnant from the time of British colonial rule in the subcontinent, when it was employed for orderlies in the British Indian Army. (Definition adapted from Wikipedia) [5] Urdu word meaning child or son or daughter, and used to address someone accordingly. [6] Paternal aunt or great-aunt (father’s or grandfather’s sister) [7]The name of a Pakistani children’s game, literally translated as ‘snow water’. [8] Urdu for ‘doll’.

"All of the girls came to see what I had done with the neon orange piece of cardboard I had...