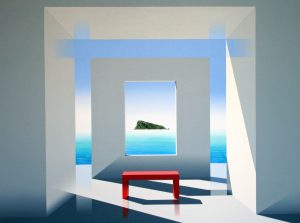 Memories by Steve Perrault. Image courtesy of the artist.

“How should I know?”

There are three roads. They lead to three places, always the same. And in between? What if I were to follow a path in between two of those roads? They would lead to familiar places too, always the same. Because I know everything around here. Because nothing changes. Because that’s how we are. Because we’re on the map and on the plan and the train knows where to find us, and so does the bus, the mail, the telephone, our friends, our family, and we’re hemmed in by the street, the room, and the door. The window always looks out on the same view. And what if, one day, that view changed? It won’t.

Sometimes, at four in the afternoon or seven in the evening my head feels like lead. But no one goes to sleep at that hour, and so I don’t either. Sometimes, at four in the morning, or at five, I’m wide awake and my head’s as clear as a star. And I want to sleep. And I can’t. And my wife is sleeping. And my children. The fire and me are the same, you see, we take a while to cool down. I can feel the embers glowing in my head, the last embers of dawn, into which, sometimes, an idea drops and painfully revives them, with something vaguely funereal, like a bunch of lavender.

Why couldn’t I eat lunch today at lunchtime?

“Where are you off to at this hour?”

“This hour” is always intended for something else, I know that. Sometimes it smells of food out in the street, or of a freshly lit stove, or of a warm, sleepy mule, or else the fields and the stars start to give off a mist. And what if I were to go out now and not see Mateo, never see him again, and yet he hadn’t died?

At around dawn, I wrung the neck of our cockerel. He was only missed because he didn’t crow any more, whereas the neighbours’ cockerels did, as they do every day.

I don’t like to close anything at night, not the windows or the doors or the chicken run or the stable. I don’t want to stop seeing the sun at night. And I do see it. How is it that no one, absolutely no one, goes out in the street at night? If I wanted to smoke a cigarette now with Felipe, could I?

Now I’m exhausted and would rather not go out, but something hard and rough and strong is pushing me out of the door, and however much I shout “leave me alone, leave me alone”, I know that I’m already on my way.

Sometimes, I go to work extra early, even if I don’t have any work to do. And then I probably don’t do anything much, but sit there like an absurd iron statue. Between hammer blows, though, I soak up the silence; like a bath, yes, it’s like taking a bath. And even the ladies of easy virtue are sleeping; the ladies of easy virtue with their fat, lustrous, much-fondled buttocks. If I wanted… But, no, I have my bed and my wife waiting for me. But what if I don’t want that bed?

Why aren’t people out dancing at night? Is it impossible? What’s wrong with a bit of a ruckus?

All right, but where? No, don’t fall into the trap, don’t go out in the street. To the left is the main square, I know that; to the right is the church, the churchyard, the cemetery. No, I don’t go out in the street, I don’t follow the paths or go to the door or look out of the window, I can’t even sleep at night, or eat when it’s time to eat or laugh when the others laugh, and sometimes, when they laugh, I feel my eyes filling up and stinging.

There have been nights when I’ve set off along that path flanked by high walls that no one knows about. And another night I walked on the moon. And the other thing that’s good is to wade into the river and keep on going, without a care in the world..

Whenever I’m about to go out, the trap is there watching me: the enormous, dangerous ditch of the day, full of smaller ditches, and the freer, broader ditch of the night, which is like a narcotic.

I get up and look at the clock again and again, the first trap, and I make haste and I get anxious because a little black hand is approaching the eight or the nine and I have to go out five minutes before, whether I want to or not. And the clock is like a heartless fool who has been crowned king. I go out and I pass Nicolás and I’m just about to say “Good morning”, but I don’t; I only fall half into the trap and instead I say “Goodnight”, and he, who has been in the trap ever since he was born, gives me an odd look and laughs because he thinks it isn’t night, and no one will ever convince him that other people in the world are sleeping, or that I’m completely outside all of this, and want nothing to do with the pavement or the short cut, and make a point of treading on all the cracks. And that some days, I help the priest, and on others I’m a poultry dealer, and on others, I do nothing at all, and on Sundays the only hammering you’ll hear in the village will be coming from me, even though, all day and every day, I’m a blacksmith. And sometimes I leave by the window, not by the door, and sometimes I escape over the wall of the chicken run that separates us off from Goyo’s place; Goyo is married and, if he sees me, he’ll think only one thing: that I’m after his wife. And he’s wrong, I’m not after his wife.

Sometimes, I’d like to be a woodworm, sometimes a bat.

No. I can’t. And in the evening, when I sit at the front door, straddling my chair, people think I’m here, just like everyone else, but I’m not; I always feel a kind of nagging resentment, a sense that I deserve more, that I’m trapped by order.

Now I’m exhausted and would rather not go out, but something hard and rough and strong is pushing me out of the door, and however much I shout “leave me alone, leave me alone”, I know that I’m already on my way. And I’m tired, so tired, just shattered really. Because man is made for the trap; because the trap is anything that’s easy and comfortable, and it’s so well constructed that I don’t have the brains or the courage to get out of it.

One day, I will escape, though, perhaps over the rooftops. The day when I don’t even know where I’m going, when I’m not thinking, not feeling. Today is only a rehearsal. And then just let people try saying there’s only day and night, only certain hours for doing certain things, that there are no other roads…

Medardo Fraile (b.1925) grew up in Madrid, and lived through the siege of the city during the Spanish Civil War. He first achieved literary recognition for his work in experimental theatre, becoming part of a group that included Alfonso Sastre and Alfonso Paso, and writing the acclaimed play ‘El Hermano’. During the Fifties, his focus moved to short-story writing, and he left Franco’s Spain to eventually settle in Scotland as Professor of Spanish at the University of Strathclyde. His stories brought him many awards, including the Premio de la Crítica, the Sésamo and Estafeta Literaria prizes as well as the Hucha de Oro. He is widely thought of as Spain’s finest exponent of the genre. He died in 2013.