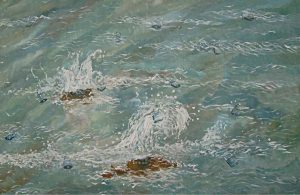 The two of them were sitting in a park in Wonsan, under the statue of the recently deceased leader, discussing a topic that had interested them forty-one years ago.

They could not find a common point of understanding then, but sufficient time had passed for them to become friends; for much of the while when they were young, they were deeply opposed, almost to the point of hatred, and those in their confidence called them, not unjustifiably, “the philosopher” and “the politician.”

As older men, they looked back on those days, and they laughed on their bench, with open mouths, regarding their thirty-five-year-old selves as charming in their overheated exertions. After all, there really were more important things, and they both could see that clearly now.

The birds in the trees were chirping, and the sounds of footsteps, ladies, and little children were stirring up a spring song. Did it really matter amid all the goings-on of life, the big and the small, that the two of them were once so determined to finish each other with short-lived refutations and longer-lived insults?

Generations came and generations went, and most others did not care about their matter; or if anyone did, it was only superficially or anxiously approached and never to get in the way of immediate and practical interests. Still, the two of them entertained the hope and the possibility that, somewhere on the road, useless things would become useful things.

All the same, the private few who had known their controversy had either passed away or given it up to dusty mantles. And the young people—unlike those they knew at any other time before—were distracted by material things and the southern wind.

And the endless circles turned and turned, and the young men turned into grey men.

What was it that the two of them spent their firmer days fighting over? It was nothing other than the question—the place of the human in the world. One was adamant that the issue was posed the wrong way, for the universe was, without exception, the great subject; whereas the other was intransigent that, on the contrary, the people were the central factor.

The philosopher contended: “The human is the outcome of the universal principle!”

The politician countered: “The human is the outcome of independent activity!”

They argued in this way for a long time, never willing to vacillate or compromise.

The philosopher declared: “If the human is central, that neglects the objective function, the cosmic material and the ideal forces that determine us and our place in the world. Independent activity is an ideological exaggeration—a danger to the life of the organism, to nature, and to society!”

The politician rebutted: “Such an idea is a reactionary reductionism—it is an insult to the dignity of human men and women, who make their own unique life in a social community!”

The philosopher disagreed: “Your claim is a crudity! Humans are an element of nature. However culturally and politically organized, humans cannot escape the laws of the cosmos!”

The politician decried: “Your opportunism is falsifying! Humans are constantly learning, and their freedom—their independence—consists in their cultural and educational level under the guidance of the leader, the party, and the state!”

The philosopher was furious: “I reject your malicious demonization! I never said humans are without these things! All of that exists in the world; but in the end, the human serves the cosmic order—the movement of matter and ideas!”

The politician laughed: “You are a naif—a puppy in politics! The human is part of nature, but nature serves the human! The human is the master, the ruler, and the decider in the world!”

The philosopher shot back: “That is a tautology!”

And the endless circles turned and turned, and the young men turned into grey men. They never tired of their dispute, but they eventually learned to enjoy the day; because as they had come to see things, it was frivolous to grind axes on axioms, though admittedly, they still felt the inclination once in a while to return to their ancient battlefields. The weather was getting lovelier and lovelier. The old men looked at the sun and the people, and they smiled.

Alzo David-West is a past associate editor of the North Korean Review. He writes literary fiction and serious poetry about North Korea (past and present). He is also published in the areas of aesthetics, language, literature, philosophy, politics, and social psychology. His creative writing about North Korea appears in Cha, Eastlit, Offcourse, StepAway Magazine, Tower Journal, and Transnational Literature.

on eid we slaughter lambs & i know intimately the color