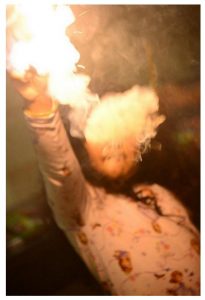 Whoof, by Rony Nair. Image courtesy of the artist.

It was the end of April, just before the rain season, and Cuernavaca’s ravines were dry. The whole city was longing: for the skies to explode and for the rain to clear the air and the roads, for rivers to emerge and freshen the ravines, for greenness to grow everywhere and out of every crack in a wall or pavement, for flowers to froth orange pink purple around the trees.

But the rain had not yet come. Dreaming of freedom, the children sat in the classroom at their wooden desks, fidgeting. Pearls of sweat decorated their upper lips, their noses, the smooth skin beneath their swarthy eyes. They were eager to play, and longed for the bell to ring.

Particularly eager were Asilata, Alejandro and Roberto, who were going to Roberto’s place after school. The three of them were excited: they would eat delicious food, play in the ravine, and climb the plum tree. After waiting for what seemed like hours, the bell finally rang, and the children were pleased to find Roberto’s mother already waiting for them at the school gate. She had striking eyes the color of dark honey, and her smile was kind, but it represented authority. After saying hello, the children climbed into the back of the car, and Roberto’s mother drove them home.

Roberto was the first one to get out of the car when they arrived. He went into the kitchen, which was an instant shelter from the heat and the sunlight, with tiles on the floor and walls made out of stone. When Asilata walked in, with her wild hair everywhere, he was still red from the heat, and was eating mayonnaise out of a huge tub with a spoon.

“How gross,” she said, beginning a flirt-attack, “how disgusting,” she said, and made a face.

“What do you care,” he said, his words muffled by the mayonnaise. Before Asilata could reply, Alejandro walked in. He was a handsome boy and the best football player in their class, but he was also mean and his gestures aloof. Alejandro wanted to be a man. Pretending to be oblivious to their flirt-fight, he greeted them with a cool, insulting word that all the teenagers were using.

Roberto asked: “Do you know what it means?”

“Not for girls, of course,” Alejandro said.

Asilata trusted Roberto. She liked the freckles on his face, and wished she could have freckles herself.

The children were interrupted by Roberto’s mother, who sent them all off to wash their hands before sitting down at the table. The delicious food—fried rice with peas and carrot cubes, meat patties in tomato sauce—made their faces sweat, and they were grateful for the sugarless roselle drink with ice cubes.

They ate quickly, thinking of climbing the plum tree. When they were done, Roberto stood up and said: “Let’s go.” His eyes were just as striking as his mother’s, just darker. Alejandro and Asilata stood up as well and went to the kitchen to thank Roberto’s mother for the meal. After that, they walked out of the kitchen and into the heat, and headed for the ravine.

It was a tricky walk downhill: they kept slipping, and the branches scratched their legs. “Everything is so dry,” said Alejandro, “perfect day for a fire.”

Roberto, who was leading the way, stopped walking. Without looking back he said: “Yes,” and then he used the word that Alejandro had used before in the kitchen.

Asilata felt uneasy. “What a bad joke,” she said. The children were now deep inside the ravine, and could no longer see any of the houses up above. They had reached the plum tree, at last. It stood alone in the middle of the ravine. Its trunk was deep brown, and broader than the space the three children would enclose when holding hands in a circle. Its branches were low, thick and many. Climbing up was easy.

The game was to distract the others and to make them fall off the tree. Last time Alejandro and Roberto had played it, and Alejandro wanted to play it again. “No man,” said Roberto, looking at Asilata.

Asilata and Alejandro jumped off the plum tree. They ran uphill with Roberto, the smoke rising up and following them, the bushes first crackling then grumbling then burning behind them.

A matchbox flew out of Alejandro’s pocket and into the air; Roberto grabbed it. Alejandro snatched it back, setting Roberto off-balance. Roberto jumped off the tree, and rolled, unhurt, on the ground. “Give me the matches,” he said, returning to his feet.

“No,” said Alejandro, “you’re out.” Asilata laughed, at first. Then Alejandro opened the matchbox.

“You’re crazy,” said Roberto, “what are you doing?”

“Oh, come on,” said Alejandro, “one match. Just to see what happens.”

Asilata was suddenly curious. “Why did you bring matches, anyway?” she said.

“Come on…” said Alejandro. “Are you afraid?” His tongue moved quickly inside his open mouth, so that he resembled a reptile, and his eyes fixed on the matchbox.

“Oh, just do it,” said Roberto, knowing it was a mistake. Alejandro took a match out, lit it, and threw it at the barren terrain before him. His eyes smiled and met Roberto’s.

Smoke began to rise. “Let’s go back,” said Asilata, and the grass began to crackle. It’s going to burn, she thought, and guilt came like a sinking stone.

Asilata and Alejandro jumped off the plum tree. They ran uphill with Roberto, the smoke rising up and following them, the bushes first crackling then grumbling then burning behind them.

“Roberto,” said Asilata, when they reached the house. “We have to find your mum.”

Roberto ignored her. “Let’s go to the rooftop,” he said, panting.

Asilata wasn’t sure. “Roberto…” she said.

“Let’s go,” he said, “it feels amazing,” and he went up the stairs. Asilata looked around for Roberto’s mother but could not find her, and meanwhile Alejandro returned from the kitchen.

“Where were you?” she said.

“Putting the matches back in the kitchen,” he said. Then they heard Roberto’s mother speaking on the phone. Asilata’s mother would arrive soon.

“Sh…” Asilata held her index finger to her lips. “Let’s go up,” she said, and tiptoed to the stairs.

“Ok,” said Alejandro, and he followed.

When they reached the top, they joined Roberto at the edge of the rooftop, which was plain cement with no parapet. “Look,” said Roberto, pointing ahead. The three children looked out to the flaring ravine. Their faces were brown and sweaty, and in their eyes, which were prickly from the smoke, concern was burning. They thought of the plum tree, majestically lit up in flames, and hoped guiltily for rain.

Jacinta Perez Gavilan Torres was born in 1989 in Mexico City, and grew up in Cuernavaca and London. She lives in Leipzig.

“It could be a remote suburb of Byzantium or the edge/ of a more familiar place.” Weekend Poem, by Leslie L. Nielsen.