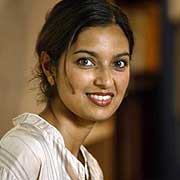 The edition of The Namesake I picked up here (‘for sale in the Indian Subcontinent only’) begins with a paragraph of praise from India Today, describing Jhumpa Lahiri as ‘a dispassionate narrator who lets life flow quietly through the winding corridors of suburbia’, rather than ‘an intrusive raconteur’. For a dozen or more pages, that description seemed piercingly accurate. The narrative eases (flows) from Ashima Ganguli giving birth to her husband’s decision, after a life-changing rail accident, to move to Boston, to her son’s life in America. Lahiri’s style is precise without being intrusive; it possesses the concentrated briskness of oral storytelling whilst being unashamedly literary (Ashima’s boy is called Gogol, after the author of The Overcoat).

In fact, this is a novel of contrasts, of lines which seem to be clearly defined only to blur on closer inspection. Just as the Ganguli family is caught between Bostonian culture and Bengali culture, just as Gogol is trapped between two names (hating his pet name, he begins calling himself Nikhil), you sense that Lahiri is neither included in nor excluded from the text.  She may not be an ‘intrusive raconteur’, but the details of her life begin to intrude into the story.

Early in the novel, she lingers on the Bengali habit of giving a child both a pet name (daknam) and a ‘good name’ (bhalonam): the pet name is used at home, and the ‘good name’ is used everywhere else. At this stage, it helps to know that Jhumpa is a pet name, and the author’s ‘good names’ are Nilanjana Sudeshna. The comparison between Jhumpa/Nilanjana and Gogol/Nikhil immediately suggests itself. Like Gogol Ganguli, Jhumpa Lahiri is the child of immigrants, and so America/India adds to the conflict of identities in both cases. Being neither wholly American nor wholly Indian, Gogol struggles to feel at home in either place: the novel follows his quest for, if not happiness, then at least acceptance.

Having outlined the obvious points of collision between author and character, it seems significant that, after a divorce and the sudden death of his father, Gogol settles down to read The Overcoat in the final chapter. The last line is straightforward yet delightfully open-ended: ‘For now, he started to read’. Whether or not reading offers any kind of solution to a crisis of identities is a question that can’t be answered, but should nevertheless be asked.

The Namesake was, once I’d finished the Murakami novel I’d bought to read on the plane, the first book  I picked up after arriving in Dhaka, and there were times when I tried to find myself hidden somewhere between the lines. Ashima and Ashoke Ganguli’s journey to Boston is hardly a mirror image of my flight from London – how could I possibly relate to their dawn-to-midnights efforts to rebuild their lives out of almost nothing?  – but you don’t have to stay long in another country to feel that sense of simultaneously longing for home and fearing that everything will have altered irreparably by the time you go back.

For Ashima and Ashoke, Calcutta/Kolkata remains home, but their children are bewildered by ‘the commuters who cling precariously to trams and buses, threatening at any moment to spill onto the street, […] the families who boil rice and shampoo their hair on the sidewalk.’ When they fly back to America, ‘relief quickly replaces any lingering sadness.’ Relatives from Kolkata phone late at night with bad news, and the distance between the two places only seems to grow.

After Gogol’s marriage to a Bengali girl breaks down, Nikolai Gogol’s short stories become his strongest connection to home, and to his own history. Ashoke is busy reading The Overcoat (at half past two in the morning) when he is involved in a near-fatal train crash. He is saved after the pages of the book flutter amidst the wreckage, and the book becomes talismanic. It is presented to Gogol on his fourteenth birthday, but ignored until after Ashoke’s death. In the hours before the crash, Ashoke repeats his grandfather’s claim that books enable you ‘to travel without moving an inch.’ Ashoke uses the statement in the context of a discussion about travelling away and exploring the world — perhaps, at the end of the novel, his son discovers that books can also be a means of travelling back.

This review originally appeared on Alone in Babel, The Missing Slate’s blog on books and the publishing industry maintained by Jacob Silkstone and Sana Hussain.