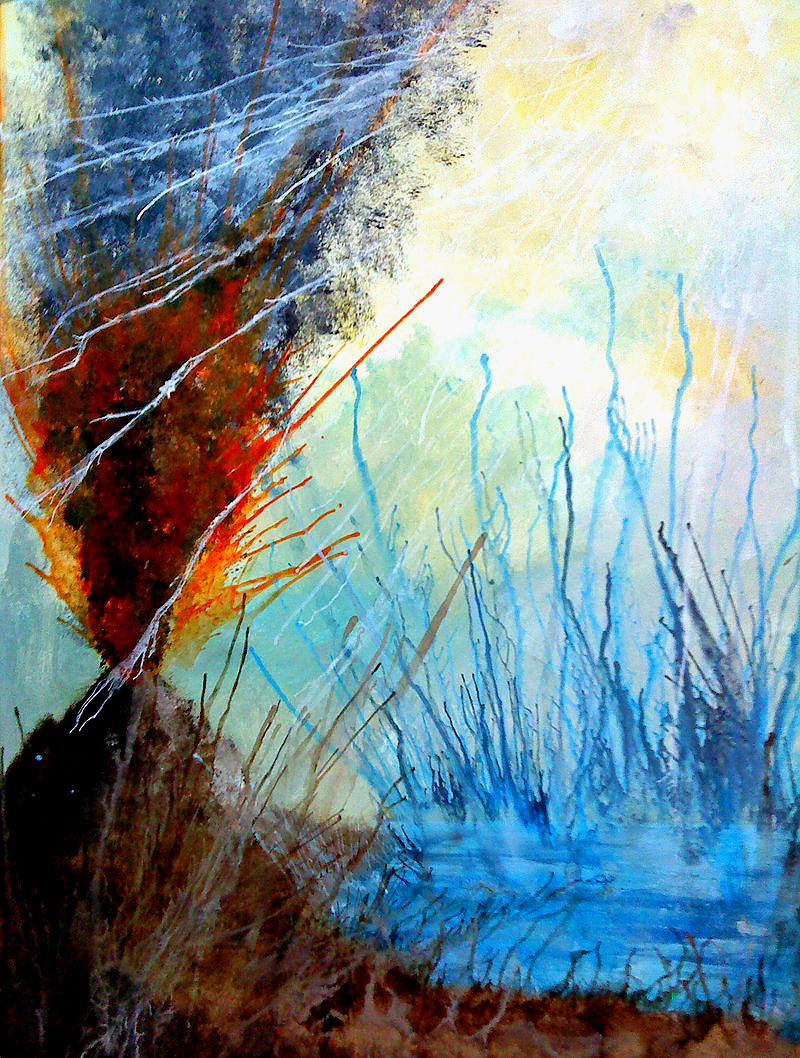 Destruction at its Finest by Russel Barnes

Prickly rains drench Mother Courage as she pulls her wagon in Central Park.
First Eilif, then Swiss Cheese, and Kattrin rushed into a red river that still gushes.
But I survived and came back; my mind is still in Iraq. How are you, Jack?
Mother Courage falls down, makes a whimpering sound, and hugs the cold, wet ground.
I’m always under attack; treatment costs money, Jack. My credit score sank.
Sheets of rain scatter the audience through multi-dimensions of city streets.

Mother Courage leads her wagon with its few worn wares along winding streets
seeking answers to ease the tide of tensions as she wanders through Central Park.
“The money box, Swiss Cheese, save yourself and tell them where in the ground it sank,”
she called. Her children have become part of the ancient river that gushes
like a red hemorrhage. Eilif kept killing and sleeps in the cold, hard ground.
Kattrin couldn’t stop drumming and was shot. I just want to hit the sack, Jack,

but my bed feels dank and smells bad. Does anyone really care about me, Jack?
I eat a small snack. My energy gets a yank as I wander the streets
of New York, not Iraq. Am I with Mother Courage’s children in the ground?
I hear Kattrin’s drum as Mother Courage’s wagon gets smaller in Central Park.
Figures hail cabs; the audience rushes into a yellow river that gushes
through multi-dimensions of city streets without answers. My house just sank.

There must be a mistake. I’ll go to the bank and ask how my mortgage sank.
There’s a long line, and I wait a long time. The bank clerk asks: “How are you, Jack?”
The red river joins the yellow one, grabs Mother Courage’s wagon and gushes,
pushing me back to Iraq, through multi-dimensions of flooded city streets.
“Excuse me,” I ask a passer-by, “did you see Mother Courage in Central Park?”
“Amazing!” he responds, “especially when she threw herself to the ground.”

I survived but have I come back? Like Mother Courage, I have only the ground
below me. I can’t see Mother Courage or her wagon; maybe they sank
in the raging yellow and red rivers that threaten to submerge Central Park.
I survived Iraq and came back with only a knapsack. Where are you, Jack?
By a tent, I see you. A city of tents. People with signs line the streets.
Someone is beating Kattrin’s drum. Sirens wail, and a stream of blue gushes

from cop cars and, wielding clubs, charges toward the tent dwellers. Red gushes
and splatters on my knapsack. I’m back in Iraq and quickly hit the ground.
Traffic snarls and horns beep because the tent people have taken to the streets.
Mother Courage and her children are with them; I don’t think her wagon sank.
The mayor lets the tent city stay for now. Do you see Mother Courage, Jack?
The floods have receded, and she’s weary, hawking her wares near Central Park.

Everywhere property values sank. Flooding banks, foreclosure gushes.
Maybe I can go back to Iraq, Jack. Here I am just asleep on the ground.
For now, I’m one of the ninety-nine by Central Park, living in the streets.

Mary Mills is a teacher of world languages. She has translated poetry from German to English, and her work has appeared in Pacific Coast Philology. She also dabbles in poetry forms. Her version of a haiku has appeared on www.newgrange.com as “Winter Solstice at Newgrange”. She also has poems in Offcourse.

I rang the doorbell at the top floor apartment