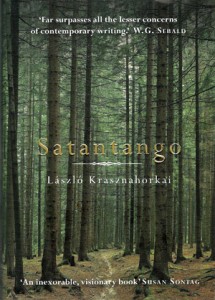 With the End of the World or the last date on the Mayan calendar fast approaching, reading Satantango by László Krasznahorkai seems appropriate. To some the 2012 Apocalypse is but another prediction, soon to fall into the lengthy list of failed prophecies. To others, it may be the perfect opportunity for an intellectual discussion about life, death, morality, for undoubtedly these subjects concern us all. Not a typical work of fiction, Satantango is a chaotic mass of words, long sentences which flow on until they are lost in the stream of one’s consciousness. It’s no surprise that the publisher opted out of printing a synopsis on the back of the book, when the story is needs to be peeled off layer by layer in order to establish some sense amongst the senseless.

In Satantango, the people live on a barren land with nothing but empty stretches of roads which seem to have no purpose save for their leading to the town bar. Each character seems to be a caricature of something larger-than-life − Mrs.Schmidt “the town whore,” Futaki “the crippled,” Esti “the innocent”, and Irimias “the savior”. Their symbolic characterization is perhaps intended to create a sense of the cryptic and religious, however impossible to sympathize with. For most of the story, the people are literally drowned in drunkenness, their moods alternating rapidly from ecstasy to irreparable grief. Even though outwardly they are different, they are made up of the same desperation. Their willingness to worship Irimias, whose eloquent speech is both a veiled threat and insult, showcases their ignorance. Although such harsh realism may reflect Krasznahorkai’s observations and criticism of his society, it leaves no character for the reader to root for. I tend to disagree with many of Kurt Vonnegut’s rules for writing, but his second rule, which urges the writer to always give the reader at least one character to root for, if applied in this case would have made the journey a lot more bearable.

Undoubtedly this was a book I had to toil through, which at times felt more like a chore than reading should be, yet I am still glad to have picked it up. There are moments of pure literary genius on the page, where words dance and mesmerize the reader: “He gazed sadly at the threatening sky, at the burned-out remnants of a locust-plague summer, and suddenly saw on the twig of an acacia, as in a vision, the progress of spring, summer, fall and winter, as if the whole of time were a frivolous interlude in the much greater spaces of eternity, a brilliant conjuring trick to produce something apparently orderly out of chaos, to establish a vantage point from which chance might begin to look like necessity…” And that is exactly what Krasznahorkai’s novel feels like, a barely visible thread of clarity in the midst of the human turmoil.

Abbigail N. Rosewood is an editorial assistant at The Missing Slate. She describes herself as a vagabond at heart, a traveler and a couch potato, a library “frequenter”, a believer in God and an agnostic. Abbi studies Creative Writing at Southern Oregon University and her work has appeared in a number of magazines, including Blazevox, Pens on Fire, The Bad Version and Greenhills Literary Lantern.

“There is a dream-like quality to Spitalfields Life. As you are drawn into it, you feel as though you are leaving behind the brightly-coloured East End of the present, and stepping into the black-and-white East End that we know from photographs of a hundred years ago…”
Robert Cottrell continues his series on the best of the web.

DVD of the Week: Fitzcarraldo