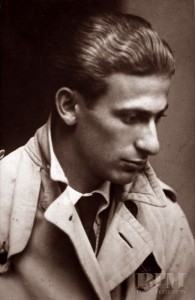 The concept of “ruined (damaged, injured) language” (rontott nyelv) is perhaps unique to Hungarian literary hermeneutical tradition.  Its etymology is based upon the morpheme RO-, which has spawned an entire subset of words in Hungarian whose meanings have to do with notions of decay, spoilage, destruction and rotting, both spontaneously generated and inflicted.  The past tense of the phrase, in this instance, would seem to indicate that the ruin or damage has already occurred, and that it is already too late for any kind of intervention.

More specifically, the term rontott nyelv evolved in the 1960s and 1970s to describe developments in contemporary Hungarian literature, referring to poets and writers such as György Petri, Ferenc Szijj, and Lájos Parti Nagy.  It particularly figures in the work of such critics as Zoltán Kulcsár-Szabó.  In one sense, the term ‘damaged language’ referred more to a rebellion against linguistic norms.  Clearly, in the context of a small(ish) central European nation with its Academies, Institutes and Language Committees, the presumed necessity of such norms is completely different than in the case of a vast global language such as the one we are employing right now.*  The legacy of ‘damaged language’ does live on, however.  One striking example is the work of Szilárd Borbély, as in his sequence of sonnets Amor and Psyche, in which the sonnet form itself begins to visibly break down underneath the philosophical weight of the language itself.

A quick look at the dictionary provides some intriguing insights: the verb ront can be used to designate a physical object that is no longer useable.  In older folk usage, it was associated with the idea of the evil eye.  It is the sheer tangibility of the term ruined or damaged language that fascinates me, however, this ability of language to encompass the process of decay, more specifically the ability of the Hungarian language to encompass ruin: a formulation which somehow evokes language as a physical space, a backdrop for drama, language as perhaps the most monumental ruin of all, as well as language as the most ideal theatre for the unhappy spectacle of human damage.

And of course there are those many instances where the word itself, as a concrete physical entity existing in space, literally begins to rot away. One such instance is to be found in the wartime poetry of Miklós Radnóti (1909-1944). Already in the midst of Admiral Horthy’s regime — which Imre Kertész was to later describe as trying to prepare him to accept the murderous events of the Second World War as normal — the presentiment of even more sinister events to follow is palpable in his work. Radnóti converted to Catholicism in 1943 (largely, it appears, for theological reasons: his relationship to Judaism was complex).In 1940 he was called up for what was very euphemistically termed ‘work-service’, but which was actually forced labour; soon after, he was being sent to forced labour camps in Transylvania, and then to Serbia.  Conditions were deeply, profoundly, murderously brutal.**  Radnóti was shot dead while on a forced march in the fall of 1944; his body was exhumed from a mass grave 18 months later.  Miraculously, a pocket diary for the year 1944 survived; even more miraculously, as his biographer Ferenc Győző writes, five out of the ten poems contained in this notebook could be read clearly.  The first two pages contain a note, written in five languages —Hungarian, Serbian, German, French and English — that this book ‘contains the poems of the Hungarian poet Miklós Radnóti’ and the politely-worded request that it be returned to professor Gyula Ortutay in Budapest.

As you look at the pages of the notebook (in the black-and-white edition reprinted by Magyar Helikon, 1971), you can see where the carefully penned words from the other side of the page, like ghostly presences, have begun to seep through the paper, which was no doubt thin and of ‘war-time quality’.  Sometimes you can almost begin to discern a word or a letter; more often than not, these undeciphered presences hover in the background like clouds against a winter sky.  You see the words beginning to disintegrate before your eyes, written language returning to its composite elements of liquid and fibre, to its own pre-verbal origins.  Sometimes a sentence seems to emerge out of veil of smoke; sometimes it disappears into it.  Ferenc Győző writes that the last two poems are permeated by bodily fluids: saliva, urine, and blood.  The poet’s body went on writing after he had been killed.

Radnóti’s name is usually not associated with the pronounced literary tendencies (calling it a movement, despite its profound significance for contemporary Hungarian literature, would be going much too far) of some 40 or 50 years after his murder at the hands of fascists.  Both were, however, a kind of poetry of testimony.  Radnóti bore poetic witness to his own murderous age; the poets of the late twentieth-century, in their deeply experimental and rebellious use of language, to the ‘disintegrations’ of the late Kádár era.  Yet these last poems of Radnóti’s, embodiments of physical ruin, snatched from the jaws of ruin, and their literal decomposition in his coat pocket in the mass grave at Abda seem somehow to prefigure the crisis and disintegration of language that his successors were to confront later on — that we all, to some extent, confront today.

*It should be noted, however, that the phenomenon of writing in pidginized English, another kind of intentionally ‘damaged tongue’, as for example in the work of Ken Saro-Wiwa, is more about the creation of a ‘minor language’ with the ‘major language’ of English (see Deleuze and Guattari.)

**See, for example, the labour-camp memoir of Ernő Szép, The Smell of Humans (tr. John Bákti).