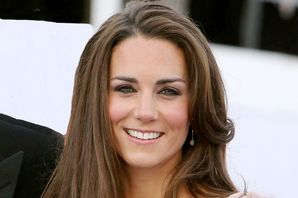 On 4th February, Hilary Mantel began the LRB’s Winter Lectures programme with a sell-out talk on ‘Royal Bodies’. Two and a half weeks later (perhaps an indication of how long the average journalist takes to read a 5000-word piece), the Daily Mail pulled lines from that talk, more or less at random, in a cover story entitled ‘Booker winner’s venomous attack on Kate.’

Mantel was erroneously introduced to Daily Mail readers as ‘a best-selling author who has based her career on writing about the Royal family.’ A special ‘History of Hilary’ feature helpfully added that ‘The 60-year-old author said she sometimes dreams of being thin again.’

This cheap dichotomy between Middleton (young, thin, therefore to be envied) and Mantel (‘old’, ‘fat’, therefore envious) is the kind of sloppy, sensationalist writing that the Mail specialises in, but other papers were quick to take up the story and condemn Mantel for daring to criticise a member of the Royal family. Metro quoted Richard Fitzwilliams’ opinion that ‘Hilary Mantel’s comments are ridiculous and say more about her than the duchess’, while The Independent reported Mantel’s ‘withering assessment’ of Middleton. Even David Cameron took a break from being clean bowled by Indian children to state that Mantel was ‘completely wrong.’ 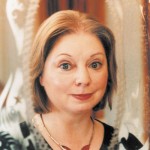 So what, exactly, did Hilary say? The few paragraphs of her lecture concerned with Kate Middleton were attempts to create a contemporary context for the real subject of the talk, Anne Boleyn. Discussing his past life early in Lolita, Humbert Humbert recalls that when he married his first wife (Valeria), he was really in search of ‘a soothing presence, a glorified pot-au-feu, an animated merkin.’ Mantel argues that, to many of her contemporaries, Anne Boleyn was simply an animated set of reproductive organs: ‘the crux of the matter: a royal lady is a royal vagina.’

And a royal womb. Hilary Mantel notes that ‘It was said she won Henry by promising him a son.’ She was crowned when six months pregnant; ‘…she was valued for her body parts, not her intellect or her soul; it was her womb that was central to her story.’ Ultimately, she failed to produce a male heir and, no longer of any importance, was beheaded. 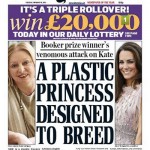 If a thousand monkeys had typewriters and a printing press: The Daily Mail

It is an ugly society that sees producing a child as being a woman’s sole purpose. And yet, as Mantel points out, Kate Middleton is viewed in much the same way as Anne Boleyn: surprisingly little has changed in nearly half a millennium. Kate is in danger of becoming ‘a ragged doll on which certain rags are hung… a shop-window mannequin.’ As if to prove the point, the Mail’s article on Mantel’s ‘venomous attack’ was illustrated with a picture of Kate Middleton ‘wearing a patterned wrap dress by upmarket High Street label MaxMara.’ The writer adds that ‘the 31-year-old duchess seemed proud of her gently swelling stomach, holding it protectively.’ When the Mail gazes adoringly at Kate Middleton, it sees her clothes and her pregnant stomach, but little else.

‘These days,’ Mantel’s speech goes on ‘[Kate] is a mother-to-be, and draped in another set of threadbare attributions. Once she gets over being sick, the press will find that she is radiant.’ Sure enough, The Sun picked up the Mantel/Middleton story under the headline ‘Radiant Duchess laughs off hurtful attack by author.’

Meanwhile, the journalists at the Mail were busy pointing that Mantel is childless and ‘infertile’, as though that constituted some sort of failure. In the comments section, readers were quick to spew out their own little nuggets of misogyny — here’s a small sample (all taken from a single page of readers’ comments):

‘She needs to stop worrying about Kate and concentrate on brushing her teeth.’

‘…what you come to expect from the so called “intellectuals”.’

‘now that i have seen a picture of her I understand why she would be bitter and nasty!! maybe she could get a little fixed up with her money from her book sales.’

‘did she get the prize for being the worst dressed, ugliest person in the competition?’

WHAT about Will’s N Kate being madly IN LOVE as is clearly seen in the pic’s of them, THEIR STORY  is REAL, unlike the fiction in this womans head.’

All comments (sic), or just plain sick… The suggestion that Mantel is simply jealous because William and Kate are ‘madly IN LOVE’ leads back to another point Mantel raised in her lecture: noting that Kate Middleton’s official portrait ‘might pass muster as the cover of a Catherine Cookson novel’, Mantel says that ‘Cookson’s simple tales of poor women extricating themselves from adverse circumstances were for twenty years, according to the Public Lending Right statistics, the nation’s favourite reading.’ The trope of the unlikely rise from poverty to riches can be found everywhere from the Arabian Nights to Grimm’s Fairytales to 50 Shades of Grey. Most often, women ‘extricate themselves from adverse circumstances’ by marrying into wealth, as Cinderella marries into wealth, as Scheherazade marries into wealth, as Elizabeth Bennett marries into wealth…

Perhaps there’s a collective need to believe that Kate Middleton, the daughter of two multi-millionaires, fits the pattern. Hilary Mantel dared to question the idea that a woman’s aim in life should be to marry a rich husband, give birth to his children and then work at having ‘no personality of her own.’ And the knee-jerk response, even from the Prime Minister, was something close to outrage.

Isn’t it time that women were no longer forced to believe in the ridiculous myth that their lives are defined by their marriages? Is it not time that we stopped venerating the wealthy in the forlorn hope that we may one day become wealthy ourselves? According to large sections of the British media, and the tabloid-reading public (let’s not forget that The Sun and The Daily Mail are Britain’s two best-selling dailies), the answer to both questions is ‘no’; we continue to be as casually misogynistic, and as obsequious before power, as we were in the time of Anne Boleyn.

Jacob Silkstone is Literature Editor for The Missing Slate.

jacob silkstoneLiterature in the news

In the seventh issue’s cover feature, Sana Hussain writes about the constant quest for belonging in literature from the Lost Generation up to and including the twenty first century.