At the young age of sixteen years and three months, I decided to embark on my first solo culinary adventure through the underbelly of Paris, Brussels, and Amsterdam over the course of ten days.

I knew it was going to be a quest of epic proportions. There was too much to conquer in far too little time. My plans of attack in each city had to be concise, and they had to be followed to a T.

I laid my first siege on Paris, the heart of fine dining. Ironically enough, I wasn’t there for the creations of Alain Ducasse or Guy Savoy. No, I wanted to discover what it was that Parisians ate and how all this amazing food fitted into their daily lives.

Shopping for food has changed dramatically over the past century. Supermarkets have taken over local businesses and offer irresistible deals. However, members of the older generation of Parisians buy food as they did fifty years ago: from street markets. There is at least one market in each arrondissement — or district — in Paris. Some are covered and others are outdoors, but there are always charcuteries (butchers), poissonneries (fishmongers), and pâtisseries (pastry stalls) and boulangeries (bread stalls). Oh! and don’t forget the ethnic food stalls (Turkish delight, anyone?) and the crêperies. I headed for Marché Bastille, one of the most popular marchés in the city. It was a bitterly cold, dreary day, but vendors had already set up at 8a.m. and had smiles on their faces. The market itself was already abuzz, with fishmongers washing down the streets with hoses and crêperies preparing their first crêpes avec Nutella et banane. It’s a pleasant break from the pretentiousness and distance that can be felt on the streets of St Germain or the Champs-Élysées.

The biggest difference between buying food from the supermarket and buying food from the street market is the relationship that one would develop with any of the vendors. Walking down the aisles of stalls, some Middle Eastern vendors mistakenly said “Konichiwa!”, taking me for a Japanese girl. Others greeted me with a kind nihao, while some other shoppers said the typical bonjour. The aura of indifference that usually surrounds people living in Paris completely dissipated, revealing the humble yet proud side of the French people. 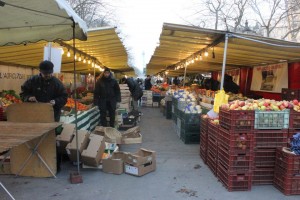 Being in Paris, it was inevitable that I would sample some foods for the first time. On the first night of my arrival, I went to a local restaurant — nothing special, really — and ordered the boeuf tartare (steak tartare). The staff warned me, “Vous savez que c’est froid?”, roughly translating to “You know that it’s a cold dish, right?” It was truly an anticlimax when it arrived — it reminded me of a beef patty that hadn’t been shaped, with a raw egg on top (the French don’t seem to be too worried about salmonella). I sprinkled on some salt and pepper, at the suggestion of a friend, but the taste of the raw beef really didn’t appeal to my tastebuds. 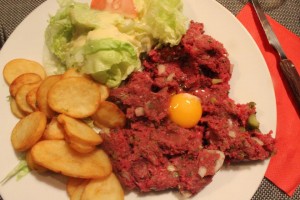 Escargot (aka snails), which I had in another nondescript local restaurant which I found in a narrow street lined with restaurants, went down a lot better, with a slightly pesto-flavored jus. The texture is much like that of any shellfish one would encounter in Southeast Asia.

Ladurée is the oldest, busiest, and most well-known ‘teahouse’ in Paris — the macaron was invented there. Mind you, it is pronounced mack-a-rawn, not mack-a-roon — the Parisians get slightly miffed when their incomparable delicacy is mistaken for the rough American coconut-dipped cookie. If you’re going to wait in the 10-minute line for the macarons, go for the (extremely) pricey Ispahan at over 7 euros apiece. Or, try them out at eponymous pâtisserie of the man who invented the Ispahan — Pierre Hermé. 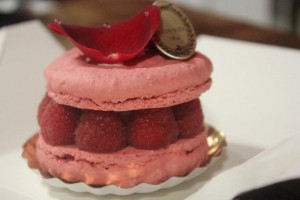 While you’re there, make sure to also try out the foie gras and truffe blanche (white truffle) macarons. I can’t say they’re delicious, but they definitely take your tastebuds on an adventure.

I have written a new rule for foodies traveling in Paris: thou shalt not leave Paris until thou hast tasted the works of Glacier Berthillon. It is the most famous glacier (ice cream boutique) for the Frenchmen, though its name is not well-known elsewhere.  Caramel au beurre salé (caramel with salted butter) is arguably the most popular flavour, but I much preferred cacao, the rich and intense bitter chocolate ice cream – the best chocolate ice cream I have ever tasted. 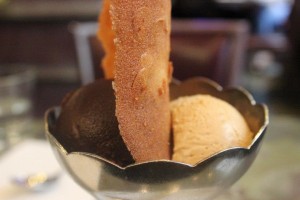 Upon my departure from Paris, I came to three conclusions:

Natalie Tsang is an Articles intern at The Missing Slate.

“A moment of seeing and speaking to each other through and against the fences…”
The Missing Slate’s February 2017 online poetry issue.

Poem of the Week (April 2), by Ali Znaidi