In a time when the notion of Japanese female director has become synonymous with the name of Naomi Kawase, another director (who just so happens to be a woman) by the name of Yuki Tanada is carving a name for herself in a somewhat unlikely, and interestingly so, niche – the youth comedy. Unlikely because youth comedies everywhere are marred by often over-the-top scenarios meant to mimic authenticity or worse, unapologetically sexist stereotypes. Interesting because Tanada does not try to shy away from some of the established characteristics of her choice genre but instead fiddles with the nuances just enough to turn it on its head with seeming unwittingness while also peppering the film with small moments of obvious defiance. How she manages to do that is a mixture of well-paced development and aptly flawed characters.

Tanada’s female characters in particular seem to have an air of mystery about them, something that mostly comes forth from the acting, as an obvious directorial choice, but also from the script. This, however doesn’t infringe on their relatability. In fact, this mysteriousness contributes to their multi-layeredness and serves to bring depth to mundane situations. Her characters are flawed but not defined by those flaws, vulnerable (and aware of their vulnerability) but not crippled by it. They are in no way exemplary or superhuman, rather, revelation and growth (of sorts) comes to arguably conclusive results. Her stories are more about the way her characters live through and with the consequences of various mistakes than about the necessity to overcome them. Much in the way it happens in life, the learning occurs unexpectedly, and not following some obvious initial set-up. 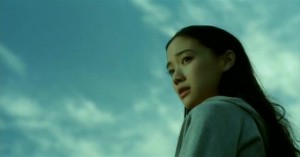 In One Million Yen Girl, Tanada tells the story of a young woman who ended up in jail because of an unfortunately foolish chain of events and who, after her release, sets off on a journey to get away from the pressure of her surroundings. On her trip, she meets with the kind of attention the young, beautiful and apparently vulnerable meet with on a regular basis – the overly attentive, the opportunistic and the discomfort-inducingly creepy are all represented to some degree. The vast majority of the interactions are resolved more or less unscathingly for the protagonist, something that can be attributed in part to her lack of involvement in any of the situations she encounters, to sheer luck and, ultimately, and most likely, in the lack of directorial desire to delve in the heavy-handed. A lot of the time, when she meets with praise from those she interacts with, she is put in an uncomfortable spot – the more she is praised, the more obvious it becomes she does not fit in. Not that she ever intended to in the first place, but the added burden of expectations only flares the desire to leave the place as quickly as possible. The film can largely be viewed as an allegory, or a factual skeleton where more poignant elements could be added to replace those of the film to similar, if more obvious results. There are times when the film almost dissolves into its atmosphere, just barely reminding us we are still in the middle of the watching experience.

Yu Aoi, as the lead character of One Million Yen Girl, does not possess the intensity and presence of Moon and Cherry’s Noriko Eguchi, but is none the less charming in her role as Suzuko. Her “great crime” is something we could, if chance presented itself, all be guilty of, and all too easily. The ending scene of the film is surely worthy of a chuckle or two even from the harsher of critics. If not groundbreaking, Tanada’s outlook certainly seems innovative and amusing enough to earn the entertainment of her public.

Overall, Tanada’s two discussed films are stories of growth that value the characters’ authenticity more than making the journey seem worthwhile. She is unafraid to showcase the fact that even though the journey did take place, the hero(ine) still has a lot of growing to do and that it’s alright to be so. Ultimately, both main female characters who have trouble adapting to the expectations and perceptions of those around them – one dealing with judgment because of something nobody should reasonably fault her for, and one struggling to break into a profession that (by her own admission) does not favor her gender, still have a long road ahead of them at the end of the films. It is, however, hinted that they will be walking the rest of the way with a bit more self-knowledge, and somehow, that’s enough.

Rhea Cinna is the senior film critic for The Missing Slate.

“…if this were a movie, your life ought to flashback before your eyes, projected on the silver curtain of your consciousness.” By Asfand Waqar, from The Missing Slate’s fiction workshop in Islamabad.

How to Build Your Dream Garden

Kapka Kassabova's 'How to Build Your Dream Garden', in English and Bulgarian, is our Poem of the Week for June...