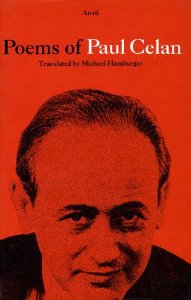 In 1997, during my first or second year at university, I learned that a favourite U2 song called ‘A Sort of Homecoming’ had taken its title and some of its inspiration from the work of the German-language Romanian-Jewish poet Paul Celan. Fascinated by all things U2, and slowly embarking on a long journey into poetry, I went to find a book of Celan’s poems at the university library. To this day I remember where the book (selected poems translated by Michael Hamburger) was in the stacks, and how it looked when I took it off the shelf and opened it. Before my puzzled eyes, a little stallion galloped across leafing fingers, milk turned black, a dove-coloured flag unfurled over snow, and words broke and re-formed in a way I had never seen. I noted, as well, that the German originals were on the facing page.

Celan stayed in my life, and I read him on and off, but only occasionally and with difficulty. Almost fifteen years after the first encounter, when I started reading Celan more seriously, I realised that there had been many good reasons to keep him in my life. As it turned out, Celan was probably also my major entry point into the world of translated poetry, and the act of translating poetry.

I mistrusted translated poetry for a long time. As recently as a few years ago, I still felt that it basically couldn’t be done, or could only be a pale shadow of the original. In university, where I discovered a lot of the poetry which was to become part of my life, I mostly read English-language poems and some French poems. As French is my second language, I felt that I could legitimately approach French poetry (although I still feel a little guilty if I read it in English translation). In one French literature class, with only a few students, we worked on poetry translation (mostly Baudelaire, as I recall) and I caught a glimpse of the mysteries and pathways of translation. It so often seemed to be about choice; preserving rhyme, or preserving a purer meaning, or compromising on both… I was puzzled and a bit irritated, but intrigued.

While I hardly feel qualified to call myself a translator of poetry, in the last couple of years I have translated a small number of Rilke’s small French poems, assisted at a few of the London-based Poetry Translation Centre’s collaborative translation workshops, and read a great deal of translated poetry, often from languages I fear I may never learn. From Russian, the poets have included Osip Mandelstam and Anna Akhmatova; from Polish, Czeslaw Milosz, Wislawa Szymborska  and Adam Zagajewski; from Arabic, Saadi Youssef, Adonis and Mahmoud Darwish; and the list could go on. Inevitably, I prefer to have a facing original if possible, at least if I can read the alphabet – even if I can’t (as with Arabic), a facing original may help to discern the shape of the poem. Hearing it read out loud is invaluable, as it allows for an emotional and sensory transmission which may otherwise be lost.

I mistrusted translated poetry for a long time… I felt that it basically couldn’t be done, or could only be a pale shadow of the original.
At this point in my life, I think that I read (and translate, a little) poetry originally written in other languages for two main reasons. The first is to experience a great work of literature which I might not otherwise encounter – even if the encounter is sometimes problematic, or if there are unanswered questions. Some time ago I attended a translation afternoon organised by Modern Poetry In Translation, and David Constantine raised some very interesting points in his plenary lecture. As examples of forms which have arrived in English from other cultures and languages, he cited the sonnet and the ghazal; if these had not arrived in English, and through translation, the possibilities of English-language poetry would not have been extended in these ways. “Confronting a foreign tongue helps you to better confront your own,” he said.

This goes on to my second reason for exploring poetry translation – to engage in various kinds of dialogue and cultural exchange. The Poetry Translation Centre, whose work I admire very much and whose translators include outstanding British poets such as Sarah Maguire, Nick Laird and Mimi Khalvati, also draws readers’ attention to the fact that English-language poetry can stagnate if it doesn’t look outward and engage with other cultures and their literature. At the Poetry Translation Centre’s recent Persian Poets’ Tour reading at Foyles in London, featuring Azita Ghahreman, Reza Mohammadi and Shakila Azzizada, I found myself in a far more mixed and dynamic audience than is typical of British poetry readings; many in the audience were Iranian or other Persian-language speakers, able to appreciate the originals, which we heard alongside the skilled translations.

At Poetry Parnassus on London’s Southbank last year, where poets from as many of the Olympic nations as possible were gathered, translation and its possibilities ricocheted around the buildings for days. It was one of the most dynamic cultural experiences I have ever had, and it was anything but dry, falsely polite, middle class or unhealthily inward-looking – all of which have been levelled as accusations against contemporary British poetry, and not always without reason. When I recently met the Sudanese poet Al-Saddiq Al-Raddi – one of the greatest living African poets, an iconic Arabic-language poet, and a celebrity in his home country – I said to him that I would love to speak Arabic to read his beautiful poems in the original. He said “You don’t have to – this [the act of translation] is how I meet you.” These meetings can be between people – poets, translators and audiences – or between the translator and the poem; or between the original poem and the translated work. And this goes back to Celan, who was also a prolific and dedicated translator of poetry, and who said in his famous Meridian speech (Rosmarie Waldrop’s translation):

Is it on such paths that poems take us when we think of them? And are these paths only detours, detours from you to you? But they are, among how many others, the paths on which language becomes voice. They are encounters, paths from a voice to a listening You, natural paths, outlines for existence perhaps, for projecting yourselves into the search for ourselves… A kind of homecoming.

Clarissa Aykroyd grew up in Victoria, Canada and studied at the University of Victoria. She has published poetry, educational non-fiction, reviews, and fiction. Over the years, her once and future literary obsessions have included many horse stories, Sherlock Holmes, Arthurian legend, and poetry. She is the author of a blog on poetry and poets, The Stone and the Star.

Senior film critic Tom Nixon extols the virtues of ‘Mister John’, one of the finest British films of recent years.

Letter to a Silent Country