Audrey Ryback" />
In this elongated and diverse country, it is almost impossible to escape polarised politics.
It is precisely here that the rebel meets the romantic communist in consensus. Both having been strong supporters of Allende’s democratically elected communist regime in the early 70s, Parra and Neruda took a strong stance in Chile’s politics– Neruda was senator for the Chilean Communist Party before it was outlawed in 1948 after which he went into exile. Later, he was nominated as a presidential candidate, before standing aside and pledging his support to Salvador Allende’s Popular Unity alliance. After winning the presidency, Allende made Neruda the Chilean ambassador to France. Parra’s political views were robust and controversial throughout his life: he supported Fidel Castro, but was also accused of not opposing Pinochet’s Military Dictatorship actively enough.

Most fundamentally, we find the ideological aspects of communism throughout much of both poets’ work. They seem to foster an innate connection to the Chilean pueblo and the Chilean culture. Parra achieves this through his often colloquial language — some of his poetry is written in the Chilean “dialect”, his simple syntax, his explicit criticisms of the upper class in poems such as the Litany of the Little Bourgeois. 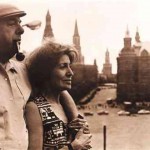 Neruda and his muse, Matilde Urrutia

Neruda, on the other hand, takes a very different approach with a similar outcome. His language is dense and flowery, packed with imagery and vocabulary, and yet he also maintains a connection to the people. His themes are popular: love, women, love, the sea, unrequited love, fulfilled love, platonic love, fading love, love for the simple things, love for political things… But particularly his odes are an honest testament to his love for el pueblo: addressing the most mundane of objects, he finds and renders with care and accuracy the incredible beauty of even the simplest things. This inseparable connection to the culture, the people and the country of Chile is what distinguishes Neruda; whilst he was in exile in Sicily he was said to have suffered much from homesickness.

Both Parra and Neruda had strong influences in shaping Chile’s literary and political landscape. Contemporaries born 10 years apart, they were perhaps poetically competitors but on the grand scheme worked for a common cause as “comrades”. Parra writes with affection in a poem entitled Salutations to Neruda: “I salute the worker of peace […]/ The messenger of a free country. My brother and friend.” And though I do not find an Ode to Nicanor amongst Neruda’s pieces, Parra did receive just last year, at the age of 98, the “Pablo Neruda Prize”.

I do not fully grasp this complex culture, this rich music, melodious language and emphatic people, but I understand that there must be something essentially political about it. Perhaps because the craters of Chile’s political history are so fresh still, marked by the bombs of a communist regime countered directly by a Military coup and Dictatorship, perhaps because it has always had a strange composition of inhabitants: indigenous Mapuches, Hispanic conquistadores,  and German immigrants in the mid-19th century and again in the 20th. In this elongated and diverse country, it is almost impossible to escape polarised politics. As I sit in a bar in Santiago drinking local red wine to the husky and melancholic tune of an elderly guitarist in the corner with his tragic Spanish love songs, I spot a picture of Allende with Neruda on the wall. As the evening progresses, I hear the husky voice gaining in strength and conviction. By the time it is time for me to leave the whole audience is standing, glasses raised chanting unanimously “EL PUEBLO, UNIDO, JAMÁS SERÁ VINCIDO!”- “THE PEOPLE, UNITED, WILL NEVER BE DEFEATED!” I find myself humming the infectious tune on my way home as I walk down the streets by the hill of San Cristobal.