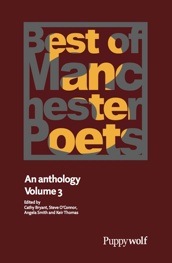 The Best of Manchester Poets project – which started in 2010 as “a new year’s resolution”, according to the Puppywolf website – released its third volume of poetry earlier this year.  The project’s purpose is to gather together submissions from poets associated with Manchester in some way (work, study and performance are given as examples), in the hope of producing an anthology each year that represents this lively quadrat of the poetry world.  “Sneeze in the middle of Manchester and you’ll infect a poetic genius, or two”,  boasts the website.

Best of Manchester Poets, as a project, can be viewed as a microcosm of modern British poetry – Manchester, as a multicultural hub for art and performance, is a boiling-pot of the various styles emerging in the country today and especially in the North.  The city has a dynamic poetry scene not entirely disconnected from its music scene, and it is perhaps as a result of this that the poems included in the anthology are so various in style.  In these pages, the reader finds a dialectic of performance poetry and work written specifically for the page, of the concrete and the abstract, of older and younger poets, and of the established and the relatively unknown.  It is a real lucky dip of modern voices.

A feature common to many of the poems, however, is an awareness of literary tradition transmuted by a Mancunian charm (of rainwater rivers and bus-stop confessionals) to something altogether more surprising.  As Mark Gwynne Jones puts it in ‘Helical Staircase’: “The helical staircase is made of glass / and beneath our feet we see our passing selves”; if we are to view literature as a helical staircase through which we see the past and the canon, then a collection like this alerts us to the extent of our borrowing from our “passing selves”, and the extent to which there is conversation between the figures on the stairs.  Cathy Bryant’s cento, given in part below, is an amalgamation of lines borrowed from eight other poets, to startlingly consistent effect:

In Xanadu did Kubla Khan a stately pleasure-dome decree
when all at once he saw a crowd of daffodils beside a tree.
One shade the more, one ray the less
had half impaired the nameless grace
that waved in every yellow face

(Cathy Bryant, ‘The Botanically-minded Plagiarist Foresees His Own Death’)

Sue Barnard’s ‘Rewriting the Bard’ is also deserving of a mention here, for her brave attempt to summarise several of Shakespeare’s best-known works in the space of eight limericks.  These poems combine a respect for the literatures of the past with an understanding that they are not sacred – everything is material for experimentation or inspiration for new work.

It is not only the literary tradition that receives some appraisal in the anthology, but the artistic tradition, too – by way of ekphrastic poems on subjects including Ken Currie and L. S. Lowry, with the latter’s representation particularly striking.  In Philip Burton’s piece ‘Industrial Panorama’, the industrial city is viewed from outside a frame, wherein “chimneys are born of infinite sky”.  The later juxtaposition of the Classical image of the Parthenon and the industrial mill, which “sharpens its teeth and waits” as it dominates the third stanza of the poem, is a particularly interesting aspect of Burton’s landscape description.  Lowry’s stick figures are imbued with a less faceless humanity at the end of Burton’s poem: the poet focuses in on the detail “a pregnant girl pick[ing] coal to eat”, simultaneously reemphasising the austere atmosphere and demonstrating the individuality of each barely visible city-dweller.

It’s true that there is nothing ‘perfect’ about the poems in this selection, and very few come across as life-affirming renditions of the sublime – these poems lean instead toward the beauty of the grim and the understated, both in poetic form and construction and in the subject itself.  This only adds to their charm.  The poems are, in a sense, bounded by the anthology’s connection to Manchester (there are many poems written specifically about the city); it is also the case, though, that pieces like Mark Neil’s ‘The Mancunian Prayer’ manage to use this to their advantage.  In its incantory recitation of place names (which itself invokes Don Paterson’s poem ’14:50: Rosekinghall’), Neil’s piece impresses upon readers the strange power of an isolated town or city name, while also connecting and comparing these along the imaginary train line of a prayer.  A name is for the most part just a name, and experiences common to people of one city will be just as common to those of the next: an industrial cityscape by any other name is just as bleak.

The anthology does occasionally manage to almost completely transcend the boundaries it sets itself, with Hua Zi’s poem ‘Night Flight’ standing out as an example.  An almost metaphysical abstraction, the short poem’s second stanza in particular has an ideogrammic clarity and breathy quality faintly reminiscent of a piece by Li Bai.  Like many poems in this anthology, however, it mourns to find itself rooted in concrete and glass:

But for a pane of glass,
I could pluck
the buckle
from Orion’s belt. 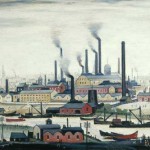 ‘The beauty of the grim and the understated’: A Riverbank, by LS Lowry

Dreaming references to the infinite and unreachable are fairly common.  Michael Powell’s ‘On the Return Train Surrounded by Infinite’ is one example – a train poem in the tradition of Larkin, with a focus on the infinity of the consciousness of others.  Ian Hayles’ ‘Infinity Station’ is another, taking for its focus instead the strange liquidity of time.  Poetry here, as in the Classical tradition, is an attempt to climb out of ordinary existence and eventually touch upon something greater.

If this anthology has its shortcomings, the most obvious of these is its inclusion of some poems that may not have made the cut in literary magazines.  This can also be viewed as a positive point, though, in that poets who previously lacked encouragement and validation from the literary establishment have found these things here – the atmosphere of the launch event for the anthology was one of community and mutual congratulations, and a similar atmosphere exists within the anthology itself.  Also, considering the current economic difficulties within the poetry industry and the perennial myth that poetry is for the few and not for everybody, that a collection as readable and inclusive as this even exists is itself commendable.

It seems appropriate to end this review with some lines from Adrian Slatcher’s poem, which the editors selected as the anthology’s opening piece:

Our need is for a non-paraphrasable
Thirty-six page chapbook

Hand-produced on a refurbished letterpress
In a workshop near Clitheroe,

Still in its first edition
Though a version for Kindle is due shortly.

Though Best of Manchester Poets, Volume 3 comes in at a much longer 187 pages, the sentiment is similar.  The project is intended not so much as an attempt at fame for the city and its writers, but more as an effort to preserve the words of the people that make the city so inspiring – to give a voice to the painted stick figures of the Manchester canvas.  Whether sales of the anthology are large or not appears to be irrelevant to the organisers: the point is that the writing is there and will remain representative of this place in this time, regardless of the size of the audience.  For anybody interested in what the buzz of the city sounds like when translated into poetry, this anthology is certainly worth reading.

“Then you married the bloke from Brown, severed ties, didn’t invite me to your wedding—afraid I’d stick my hand up your bodice…” Weekend Poem, by Eleanor Levine.

Hirokazu Koreeda's Hana tells the story of a samurai who sets out to take vengeance on his father's killer and...