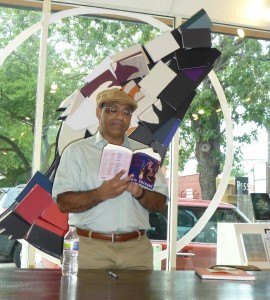 Continuing our Author of the Month interview series, assistant fiction editor Sauleha Kamal talks to Anis Shivani about literature in the age of neoliberalism, alarming similarities between the US and ‘renegade states’, and the authoritarianism of the corporate marketplace.

Click here to read Anis Shivani’s ‘Dubai’, our Story of the Month and here for his essay on world literature.

Recently, Dubai’s ‘dark side’ has started to receive more media coverage, with some focus on the terrible treatment of foreign workers. What drew you to write about the city?

When I wrote this story in early 2006, Dubai was just beginning to become a leading story in Western media. This was about the time coverage of the miserable conditions of migrant workers began to appear. I was interested in depicting a dystopian city — at least I think of it that way — with an invisible laboring class hidden away in shantytowns far from the gleaming skyscrapers, and dual or multiple notions of rights for different classes of citizens, Emiratis versus Western expatriates versus Asian workers. Dubai has since been the subject of a great deal of journalistic exploration, as the abuses underlying the frenzied prosperity have come to light. I don’t know to what extent any of the injustices — such as seizing workers’ passports upon arrival, wages being withheld and workers being denied basic rights — have been addressed. My guess is not much has changed, since that is the nature of the illusion that is Dubai. If anything, the megalomania — the biggest, the highest, the tallest — only seems to have magnified manifold, the global recession probably just a momentary speed bump along the pell-mell rush to madness. The construction of Dubai as a neoliberal capitalist paradise, far from enlightenment notions of equality and freedom, seems to me just another way that Arabs have misused their wealth in short-sighted ways, rather than building societies that have a chance of outlasting the moment.

Neoliberalism has corrupted late-twentieth-century notions of immigration, to the point where there is now a convergence between the U.S. and renegade states… built on guest workers
When I wrote the story, immigration politics in the U.S. were also very much at the forefront (as they are again today), as historic marches for immigrants’ rights were taking place all over the country. In 2005, Congressman James Sensenbrenner had presented a bill making undocumented presence a felony. Subsequent legislation, while it hasn’t gone that far, consistently moves in the direction of criminalizing immigrants. This was also the time when the concept of the “guest worker” emerged in the consecutive immigration bills that were debated in congress in 2006 and 2007. The category of the “guest worker” was revolting to me, because I believe in equal citizenship rather than creating different classes of people. What Bush was proposing then seems incredibly tame, however, positively New Deal in its benign intentions, compared to the legislation currently under consideration, which is determined to set up permanently different classes of people vulnerable to exploitation.

So this is how neoliberalism has corrupted late-twentieth-century notions of immigration, to the point where there is now a convergence between the U.S. and renegade states like Dubai built on guest workers, with the U.S. often explicitly pointing to such countries’ regressive immigration practices as the model to follow. The one thing we’d got right was immigration, but we’re hell-bent on destroying our successful model. When I wrote the story I was wondering how far the U.S. would proceed along the lines of inequality and immobility, and in the wake of the financial crisis I think we have our answer now.

My character Ram, who has been illegally present in Dubai for decades, is actually very fortunate in having acquired the protection of an Emirati sheikh early on in his stay, so that he’s immune to the vicissitudes confronting ordinary migrant workers. He floats above the concerns of the laborers as well as the petty bourgeois among the Indian immigrants, the shopkeepers and traders, convinced of his own invulnerability. Of course this is a mirage — as it always is in police states — because what someone like Ram thinks of as his right is actually only a privilege, subject to revocation at any time. Dubai — and the U.S. immigration system has become very similar in its corruption of humanist ideals — can only be pushed so far. In many ways Ram’s situation is highly unrealistic, almost utopian given the actual economic and political context. In Dubai, they supposedly tell you, If you don’t like it, just quit, just leave the country. Well, Ram wants to leave voluntarily. Is that even possible? For Ram, for the migrants who have set up lives in the U.S.? Voluntary departure is a fantasy, there as here.

In ‘Dubai’ you write, “Law and justice are abstract constructions, generalities which concrete facts usually make a mockery of.” Do you share this perspective with your protagonist, Ram, and can it be universally applied?

Yes, I do agree with this idea. To the extent that any law is formalized and given abstract shape, it will of necessity violate the uniqueness of individual circumstances. But this is how we govern, fooling ourselves that we are in the business of dispensing justice. The only law that would be completely just would be completely attuned to individual circumstances, that is to say, it would be completely anarchic. So anarchy and law are always in insufferable competition. To stay with immigration, the many millions of undocumented people in the U.S. are supposed to be covered by overarching legislation that will define who gets to stay and with what rights. This ignores the individual circumstances of real people with real histories and families, most of whom will be bypassed by the harsh disciplinarianism of the law, with regard to work requirements, for instance. What happens to the disabled woman who can’t work but has happened to build a life here for thirty years? Of course you could do the sensible thing and pass a law based on simple presence in the country, and that would be much closer to justice, but even that would have to be subject to consideration of individual circumstances in order not to deviate from fairness.

It’s interesting that Ram formulates his concept of abstract law as unjust early on in the story, as he contemplates his part in protecting the Emirati sheikh’s culpability in the incident that took place thirty-five years ago, resulting in the death of a fellow worker at a construction site. He’s not thinking of himself when he formulates this opinion, though soon this will apply to him too, as he’s taken into custody for a past he thought he’d put behind him. He’s lived his life in Dubai allowing a crime to go unpunished, making the law flexible in his own mind to ease his conscience: the sheikh didn’t mean to run over the worker, it was God’s will that it happened. But “the law” apparently already knows quite well what happened. So it’s an endless series of illusions, which ultimately backs up into the idea of justice serving the powerful, and Ram being not godlike but just a pawn in the end. Law becomes flexible when it comes to the rich and powerful, not otherwise.

Lost in the Flow of Time

"Names and butterflies flutter around/ while the literati picnic on the grass." Poem of the Week (September 3), by Anatoly...