Ottilie Mulzet reports from Hungary, where far-right extremists are burning the poems of Miklós Radnóti 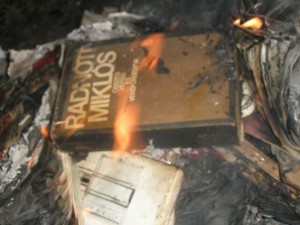 On November 16th—the day before International Students’ Day—a picture appeared on my Facebook feed: it had no attribution, just a link to a picture without a website. The image, however, was disturbing enough: it showed a copy of Miklós Radnóti’s ‘Collected Poems and Translations’ (‘Összegyüjtött versei és versfordításai’) in flames. The edition looks to be one of the older versions, the style recognizable as coming from the seventies or eighties: a solid background of a rather undefined brownish colour, the squarish, solid-looking large type announcing the author and the title. The solidity of the typeface—as if promising Radnóti some kind of immortality, entrusted to paper, ink, glue and binding—is belied by the fact that nearly the entire lower right-hand corner of the book has already been devoured by the flames. You can see, in fact, that an entire section of that part of the book is about to succumb to the fire (the web site where this picture was posted continually refers to the fire as “cleansing,” “purifying”)—part of the book is already close to crumbling into ash.

A few hours later, the image appeared on my Facebook feed again, this time with a link to the web site where it was posted.  Now I understood: the Hungarian group that had undertaken this event, which they referred to as the “Night of Purification,” explained their motives in a short paragraph placed above other photos of a smallish group of men in army fatigues standing around what looks to be either a rather largish campfire, or a smallish bonfire. Now I could see that the copy of Radnóti’s ‘Collected Poems and Translations’—the kind you could pick up in a good second-hand bookshop in Budapest for not too much—had been placed next to some copies of Playboy magazine. They burnt in the fire together.

The language of the website almost seemed as if it could have come from a non-existent volume entitled Manichaeism for Beginners: “Where there is light, there is no darkness…”  And as I look over the website today, there is now an image of Alan Dershowitz’ ‘The Case for Chutzpah’: the flame wraps around the Star of David on the cover.

I confess to being somewhat intrigued by the language though; and wishing somewhat pedantically that these book-burners had done some more homework. It is true that the religion of Mani, who saw himself as a reformer of the ancient Persian religion of Zoroastrianism, nonetheless maintained to a significant degree the fire cult of Zoroastrianism, which associates fire with the highest purity. The echoes of these ancient religions can be felt all across Central and Inner Asia: the purported ties of the Hungarians with “our relatives,” an object of renewed fervour in recent years (this in and of itself is a vast subject), is the obvious subtext here. Among Mongolian nomads—to take one salient example—fire is considered as pure and sacred. For that reason, however, it is taboo to throw anything at all, let alone what the thrower would consider to be “garbage,” onto the fire. (If anything, you must offer to the fire something known in Mongolian as deeǰ—the best part of any food or drink—before even preceding with any other tasks you might wish the Fire to carry out for you.) Not to do so is considered as actually desacralizing the fire, angering the Fire God who resides there. As archaic (or even fanciful) as these notions might seem, I myself experienced an unquestionable moment of clarity on this topic when, among a group of Mongolians enjoying a beautiful evening in a landscape that does seem full of deities and spirits, a loving father attempted to comfort a crying child by saying, “Come and have a look at the Fire God.”

On this evening, in this corner of northern Hungary, nothing was cleansed, and the Fire gave birth to Darkness.

Editor’s note: Miklós Radnóti was murdered during a forced march in November 1944. His body was interred in a mass grave. The rise of the far-right in Hungary, and many other European countries, makes it all the more important to remember his work, and the destructive ignorance he so courageously stood against. We remember, too, a widely-cited phrase from the German poet Heinrich Heine (like Radnóti, Jewish by birth): Dort wo man Bücher verbrennt, verbrennt man auch am Ende Menschen. Where they burn books, they will end by burning human beings.

Ottilie Mulzet is a Hungarian translator of poetry and prose. Her published translations include László Krasznahorkai’s ‘Animalinside’.

The disturbing relationship between art and conspiracy

"...a pause,/ a holding of breath. And the trigger squeeze/ like coaxing a moth on a silk thread." Poem of...