Both laureates shared a common birth date, January 23rd — Lewis in 1915 and Walcott in 1930. That day would be declared Nobel Laureate Day. The week around January 23rd would henceforth be Nobel Laureate Week. The central Square in Castries, formerly called Columbus Square, would be named after Walcott. The Community College already carried Lewis’ name. When he died in 1991, his body was laid to rest on the College Campus grounds.

Since 1993, lectures have been established in the names of both men. These presented the opportunity to bring notable names in Economics and Literature to St. Lucia and its people.

Nobel laureate week 2014 begins on January 20th. The first event is held at the National Cultural Centre in Castries, with the launch of the Peace Ambassadors Programme at 10 am. The theme for this year is “Youth and Community: fostering social inclusion through peace and security.”

At 7.30 pm, at Government House, there is the high profile launch of Derek Walcott’s brand new omnibus collection entitled ‘The Poetry of Derek Walcott’, published by Farrar, Straus and Giroux. In the audience, in the presence of Her Excellency Dame Pearlette Louisy, the Governor General, are the poet himself and partner Sigrid Nama; British poet Glyn Maxwell, who selected the poems in Walcott’s new omnibus collection, and the President and Publisher of FSG, Jonathan Galassi.

In attendance too are a number of international writers, good friends of Walcott, who have come for the week and to celebrate Derek’s 84th birthday on January 23rd, Nobel Laureate Day. Among these writers are Caryl Phillips, who will deliver the 2014 Derek Walcott lecture; Indian poet Sudeep Sen, last year’s speaker, and Stephanos Papadopulous. As part of the launch, both Sudeep and Stephanos read from their work, while remarks are made by Maxwell and Galassi. The highlight of the evening is a short reading by Derek Walcott himself.

Once the formalities are over, guests are entertained by Manmay Kwéyòl, Walcott’s favourite folk music group. He and some of his St. Lucian friends, among them well-known local poets and the Governor General, lead the singing of popular folk songs.

At 10 am the next day, the National Awards of Excellence are held at the Cultural Centre. Awards are made in several areas and young people feature prominently.

In the evening, at the Cultural Centre, Caryl Phillips — novelist, essayist and playwright, teacher at Yale — delivers the annual Derek Walcott lecture, “American without America: Derek Walcott’s American Odyssey.” A good crowd is on hand to listen and participate.   Derek Walcott is in the audience, with his publisher Jonathan Galassi, Glyn Maxwell, and a number of writers visiting from various parts of the world. Missing this year is the late Seamus Heaney, who usually came to St. Lucia at this time.

The Caryl Phillips lecture comprehensively covers Walcott’s earliest years in New York as a theatre student, his discomfort with the big city, and then his more successful years as a major writer lauded by the New York and American publishing and literary establishments. Walcott had written an unpublished autobiography ‘American without America’, and this seems to have provided the main source of information for Phillips.

A number of events are planned for Wednesday 22nd, including a Schools’ Choir Competition Finals at the Cultural Centre. The Ave Maria Girls Primary School win the primary school category while the Vieux Fort Comprehensive Secondary School, from the south of the island, take the Secondary Division title.

The big event in the evening is the Gala Premiere of the Documentary on Walcott, “Poetry is an island,” directed by Ida Does of Surinam. This takes place at the Sandals Grande Hotel, Pigeon Point, Gros Islet, in sight of Walcott’s St. Lucian home.

The film is over an hour long and features interviews with, among others, actor Arthur Jacobs, artist Dunstan St. Omer, and younger actresses like Natalie LaPorte. All these have had a long relationship with Walcott and provide links in a retrospective look at the career of the Nobel-winning poet and playwright. It is very much a look at Walcott from the perspective of the aging poet tracing his journey from youth to this point, his 84th birthday. As always, he is frank about his frustrations about the state of the arts in the Caribbean and St. Lucia with its lack of infrastructure to support arts development. He is candid and quick to shed tears as he reads poems about his late mother or friends who have died. Through it all, Walcott reiterates his love for St. Lucia, the island that has inspired some of his best work: for this fortunate traveller, St. Lucia is home. 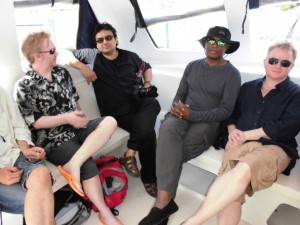 Thursday January 23rd is Nobel Laureate Day in St. Lucia. On the programme is the Derek Walcott Schools’ Theatre Arts Festival at the Cultural centre.

As has become customary Walcott takes his friends, visiting and local, for a catamaran boat ride down to Soufriere, with lunch at the famed Ladera restaurant.

In the evening Sir Arthur Lewis is honored with the presentation of the annual Sir Arthur Lewis Memorial lecture by Nobel laureate Eric S. Maskin of Harvard, the recipient of the Economics Nobel in 2007. His lecture is titled “Globalisation and inequality: its impact on small developing  states.” A good crowd is present and the question and answer session is lively.

The tomb of Sir Arthur Lewis is at the Community College in St. Lucia that carries his name. Continuing another tradition, there is a wreath-laying ceremony at the site with a programme prepared by staff and students of the College. This happens on Friday January 24th.

In the evening the venue moves to the Cultural Centre where St. Mary’s College, alma mater of both laureates, stage their tribute to the laureates. Drama, music and poetry, form the content of the programme.

The week comes to an end with a Night of the Arts for Peace organised by the National Youth Council, at the Cultural Centre, on Sunday 26th.

Nobel Laureate Week has now become one of the fixtures on St. Lucia’s arts calendar. Its absence would leave a void in the island’s literary and intellectual life. The activities are recorded and provide worthwhile material for later viewing and listening. It may well be that St. Lucians largely take it for granted. But for schools, young and older artists, the event provides an opportunity to renew and refresh and to be reminded of what is possible as the accomplishments of our two Nobel laureates are reviewed and celebrated.  The organising committee has kept the word “Excellence” in its annual promotions. And to have the living Laureate Derek Walcott present is a special and rare privilege that is perhaps underappreciated. Through Walcott many famous people, among them the late Arthur Miller and Seamus Heaney; many Caribbean writers, among them George Lamming,  Lorna Goodison and Kwame Dawes, other  literary critics and intellectuals; other well-known names like Wole Soyinka and Yusef Komunyakaa, have come to St. Lucia and have been seen and heard by everyday persons. Quite an achievement for a small island, 238 square miles, 150,000 population.

To top things off, just before this year’s week, the news came that the retired Archbishop Emeritus of Castries, the capital, had been made a Cardinal.

“The blood-caked hairs on the dog’s tortured body were turning into symbols. With a painful sneer she realized what they meant.” Story of the Week (January 31), by Balla. Translated from Slovak by Julia and Peter Sherwood.

"The blood-caked hairs on the dog's tortured body were turning into symbols. With a painful sneer she realized what they...