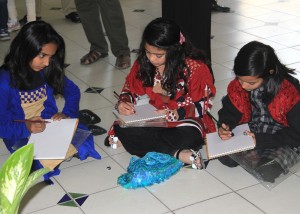 The idea had been a very long time in the making, but the moment of its actualization hardly held any pretense of significance.

It was one of those evening-tea-turned-into-meeting moments, a brainstorming session: I simply expressed how I had always wanted to work with kids and how an Art Fest for them would be incredible. And my boss turned and looked at me and said, “Definitely, let’s run with it.” And that was it: the idea had now been fertilized with the belief that it was something that was worth doing.  The foundations for the first ever Karachi Children’s Art Fest (KCAF) had been laid down.

This passing moment happened sometime in October, and the Art Fest was initially scheduled for December, only to be delayed by a month and rescheduled for the last weekend of the first month of 2014, the 25th/26th of January. 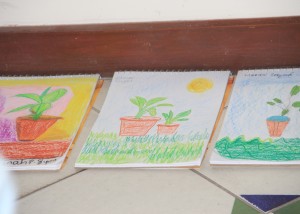 We were lucky enough to get some amazing collaborators and supporters. The event started as collaboration between ArtChowk – the Gallery, Spaces Gallery and TBYU. We faced our first hurdles in the shape of a possible venue and funds for the event, and for both problems we found more than just solutions – we also found some amazing friendships. Goethe Institut was there to help us out by offering us their entire premises, while Lifebuoy and Liberty books helped us out with funds; Alliance Francaise and Saturday Studio brought with them their own creative flair. It was only through these collaborations that the event was made possible.

When we started sharing the idea with people, we found ourselves constantly saying, “We are all ready to fail, but still this is something that needs to be done.”  In retrospect, I think it was more about preparing for the worst. But, in spite of the mental prepping, we were far from at ease when the first day finally arrived! 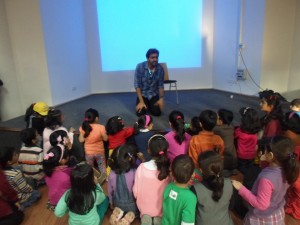 A sudden turn of political events had led to the city being shut down: the night before, there had been a series of small blasts (numbers vary from 17 to 50) and a strike was announced. While I remained blissfully unaware of this till 11 in the morning, it did explain the slow response and our initial disappointment. The show was scheduled to start at 9, but it was only at 9:45 that the first visitors walked in the gate – the rest of the day saw a slow trickle of people. There were, however, many highlights of the day: the Clay workshop, Creative writing with Shamain Nisar, Storytelling with Shazaf Haider, and Putting up a Tamasha (Play) with Fawad Khan. Somehow we made it through day one, and the only thing that kept our morale high that day was the act that the number of kids that did make it that day did end up having a fantastic time. 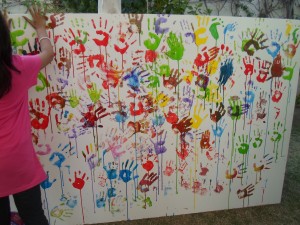 The second day was a blessing indeed. With people pouring in and out all day, there was a buzz of activity. The big hits included our all-day Art Activity, ‘Shadow puppets we make’, ‘Capture the moment’ – a still life workshop with S.M. Raza, ‘Appreciating Art: How to look at Art’ with Shahana Rajani and our storytelling session with Rumana Husain. By the end of the day, there were as many parents participating in our art activities as kids. There were stories shared about sticking to what you believe in, about success and failure; there were compliments and blessings. And it really did seem like we made an impact, no matter how small. No doubt we learnt a lot, we could see clearly just how many mistakes that we had made, and the most encouraging part was that parents came up to us to tell us exactly how to improve. We weren’t written off as just a failure. They wanted us to be back. 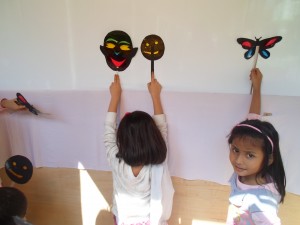 But why did we decide to put ourselves through the trouble of doing something like this? Well, there were two reasons: firstly, while we are constantly told that children are the future of our nation, there is very little that we are contributing as a society towards their growth. There should be much more for them, many more opportunities. Art was a natural choice for us to work with,  not only because it’s our chosen profession, but also because it’s a medium that encompasses the power to make one think critically, to look beyond first impressions to find a deeper meaning. 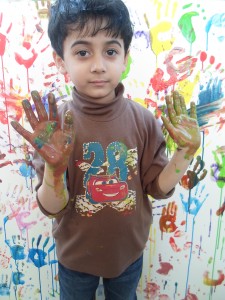 The second reason was to be presented in a little speech either at the inaugural or closing ceremony, whichever was able to materialize; neither did. Fortunately, I have the opportunity to close this piece with that little piece of reasoning which got this all started. In 2012, I had the chance to go to the USA as part of a Cultural Workshop and learn with the Smithsonian and the University of Wisconsin, which meant spending a lot of time in museums. The first day I caught sight of the Natural History Museum and then the giant mammoth in the lobby and the live butterfly exhibit and then, with each passing day, another sight to make me amazed. And every sight made me think just one thing: I had to wait this long to see this. These are things that we all deserve to see when we are young; these are opportunities that we should get as children. Having said that, I know I am among the few fortunate ones in Pakistan who got this chance. So with KCAF, we hope that we can bring a small fraction of creativity and wonder to the lives of the children who will shape our future.

Varda Nisar is an Assistant Fiction Editor for the magazine.

Morality is difficult enough in life, but morality in literature spans a much richer tapestry writes Maria Amir.

"All humor, Leibowitz knew... was based upon a man in trouble. And when it came to trouble, marriage to Leibowitz's...