Chester Novell Turner is one of the great unsung heroes of the Home Video revolution: an Art Brut provocateur, analogue auteur, and maker of trash-horror ephemera that skirts the edge of experimental cinema. Armed with a consumer-grade camcorder and Casiotone keyboard, Turner corralled friends and family (most notably Shirley L. Jones—his muse, creative collaborator, and former flame) into a pair of no-budget renegade productions that have since found their second wind as cult curiosities.

Far removed from the strictures of commercial filmmaking, Turner crafted from the slenderest of resources two of the strangest outsider artefacts from the mid-eighties horror boom: Black Devil Doll from Hell (1984) and Tales from the Quadead Zone (1987). His films bear many familiar hallmarks of the shot-on-video subgenre—the threadbare production values, amateur hour performances, clumsy handheld camerawork, helter-skelter plotting, shaky-thumbed fumblings with the zoom lens—and yet they are also more raw, expressive, and unsettling than much of their brethren. With a flagrant disregard for good taste and conventional film syntax, Turner’s trash-horror diptych takes us places far removed from the likes of Blood Lake (1987), Crazy Fat Ethel II (1987), and other mercenary shelf-fillers from the VHS era.[1] Beyond the chintzy Howdy Doody sex shows, breast-shaped coffee mugs, and vocoder-voiced zombie clowns lurks the lo-fi gurglings of an id unleashed, an unhinged (and unsupervised) creative vision breaking free of its glitchy VHS confines. Turner traffics in a vulgar and undisciplined cinema whose ungrammatical grasp of film language approaches a sort of gonzo experimentalism. Qualifiers like “good” and “bad” lose all meaning. 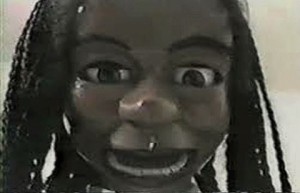 Perhaps due to budgetary limitations, Turner structures all of his films as suffocating chamber dramas. He pares his casts down to a few key players, keeps them confined to closed quarters, and cleaves narrative action to its minimalist extremes. Turner’s hermetically sealed world consists of dingy living rooms, cluttered basements, mildewed bathrooms, and other claustrophobic domestic spaces (all belonging to cast and crew members, no doubt). His films unfold like morality tales with an absurdist bent, half-cracked horror parables that mix Old Testament dramaturgy with open-armed concessions to bad taste. This clear-cut rendering of the morality tale framework recalls two of Turner’s biggest creative influences: the 1930s Universal horror cycle and The Twilight Zone. Through this narrative structure, Turner renders his monsters into convenient metaphors and hammers away at a few Big Important Themes: faith, family, sin, and the corruptibility of ordinary people.

Black Devil Doll From Hell, for instance, falls somewhere between psychosexual parable and gonzo-sleazoid farce. Framing itself as an old-fashioned tale of temptation, the film charts the existential crisis that nips at the heels of one woman’s sexual awakening. It follows Helen Black (Jones), a religious scold of the slut-shaming variety whose unflappable Christian faith (to say nothing of her chastity) wavers after a violent sexual encounter with the eponymous devil doll (voiced by Keefe Turner, Chester’s brother). “Before I give you a lesson in pleasure,” the puppet barks directly into the camera, “I’m going to give you a lesson in pain!” In the span of an excruciating six-minute foray in bump-and-grind porno-puppet theatrics, Helen embarks on a metaphorical fall from grace where the rapacious doll breaks through her defenses, inflames her repressed desires, and sends her down the self-destructive path of carnal desire. Turner stages her descent as a slow-motion sexual implosion, fixing his camera (and zoom lens) on Jones as she pinballs around her house and wrestles with her insatiable carnal appetite. In Turner’s half-cracked cosmology, trash-talking Rastafarian puppets become the horror-kitsch equivalent of serpents in the grass, leading a defenseless Christian flock astray while out-Kruegering Freddy Krueger with their gratuitous use of the word “bitch.”

Perhaps as an act of mercy, Turner scales back some of these transgressive qualities in his second (and final) film: Tales from the Quadead Zone, a lo-fi homage to the 1950s anthology programs. Submitted for your approval are two tales of terror and a wrap-around story: ‘Food For?,’ a southern-fried slice of backwoods Buñuel that ends with a blood-spattered dinner table; ‘The Brothers,’ a story of sibling rivalries, rambling soliloquies, and purloined cadavers dressed up in clown costumes; and ‘Unseen Vision,’ a veritable one-woman show starring Shirley L. Jones as a bereaved mother who entertains her ghost child with horror tales read from a mysterious book. This latter section ranks as the standout work of Turner’s career, a cinematic coup de grace with a raw, unstudied rendering of grief and despair. It unearths a rich vein of pathos from beneath that thick layer of static and chroma noise; no amount of fake blood and Casio squeals can undo the visceral impact of witnessing Jones succumb once more to dark, primal forces. 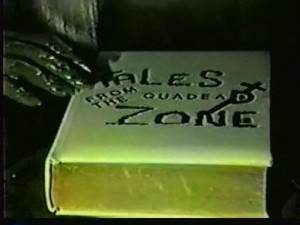 But arguably the most laudable (or lamentable, for some) element of Turner’s films is their confrontational aesthetics, a byproduct of Turner’s lack of formal training. Turner’s intuitive grasp of film language approaches a sort of avant-gardist counter-syntax, giving his films a roughhewn experimental quality that matches the lurid tone of their storytelling. Intentional or not, every element seems calibrated to violate some ironbound rule of film form: the twitchy rhythms and rough analog textures produced by a low-grade video camera; the cacophonous hum of its internal fan and the ear-splitting squawk of the Casio demo keys; the slackening of cinematic time; the staccato, slice-and-dice rhythms of Turner’s editing. His films bounce between extreme torpidity and restless movement. Long stretches of Black Devil Doll From Hell luxuriate in an unrelenting tedium, as Turner refuses to shave off the fat and instead chronicles his protagonist’s daily grind in excruciating detail. At points, the film resembles an am-dram production of Jeanne Dielman, 23 quai du Commerce, 1080 Bruxelles (1976). But at other points Turner’s camerawork grows restless and inquisitive, as when his camcorder embarks on a pointless five-minute treasure hunt through Helen Black’s house as if it too has grown frustrated with the film’s lack of narrative momentum. Turner also has a fondness for extreme audio-visual freakouts: the erratic use of freeze-frames, aggressive close-ups, and overdubbed grunting in Black Devil Doll From Hell’s six-minute rape scene; the casual ruptures in spatio-temporal continuity in Tales from the Quadead Zone, where climactic shootouts and stab-happy slow dances are chopped up into erratic nightmares; the atonal shriek of Turner’s Casiotone soundtrack, which drowns out key expository dialogue and shares the same stop-and-start quality of late-period Godard. His film aesthetics jolt and jostle with shocking regularity, adding to the visceral discomfort.

Through it all, Turner’s films keep us suspended somewhere between a squirm and a laugh. They teeter on the edge of kitsch-comedy, but still hold some unexplainable allure. I’m not entirely alone in feeling this way. Since their release, Turner’s films have accrued a sizable cult following and now command exorbitant prices on the VHS collector circuit. Used video cassettes of Tales From the Quadead Zone go from anywhere between $700-$1000 on eBay. Rumours circulated in the mid-nineties that Turner had died in a fatal car accident, but his legend continued to grow: the DIY filmmaker who left his thumbprint on horror and disappeared, the African-American auteur who elbowed his way into a notoriously whitewashed film genre. However, thanks to the efforts of Massacre Video founder and amateur sleuth Louis Justin, Turner has since re-emerged from the ether and grown acquainted with his fans. By all accounts an affable and humble individual, Turner has recently expressed his desire to return to filmmaking. He’s even suggested possible sequels to Black Devil Doll From Hell and Tales From the Quadead Zone. Not a bad second act for a self-taught filmmaker. To quote one of his most famous creations, “How do ya like that, bitch?”

[1] This statement should not be misconstrued as a blanket dismissal of the entire shot-on-video subgenre, but can rather be taken as a begrudging acknowledgement that many productions of this ilk were of the cash-grab variety: cynical, impersonal, largely disposable time-wasters. At the same time, a number of real gems—VHS oddities with a strong authorial thumbprint and half-cracked creative energy to burn—slipped through the cracks. Many of these are just as deserving of critical reappraisal. A few notable examples: Boardinghouse (1982), Video Violence (1987), Things (1989), and (among my guiltiest of pleasures) Armageddon: The Final Challenge (1994).

“She knows the time/ from the way the roses bend,/ from how far or near the sky is…”
Poem of the Week (January 11), by Dunya Mikhail. Translated from Arabic by the poet.