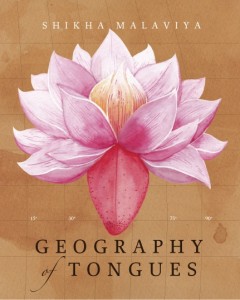 When a colourful topographical map is sketched using poetry, varied images and the seductive power of memories, it becomes possible for the reader to simply marvel at the creation and take in the undulating contours that wind through the landscape. In Shikha Malaviya’s debut collection, ‘Geography of Tongues’, the reader travels along the bends and ridges and highs and lows that the poet’s map brings to the fore, before zooming back to the point of origin and then plunging headlong into the depths of memories of the past only to emerge in some distant region.  The author herself has resided on different continents and experienced starkly different environments throughout her life, and this has undoubtedly contributed to the unique atmosphere of her first book.

The poems move from fond, vivid memories of her childhood to the highlighting of social issues and candid bursts of sensuous imagery. India and the nuances of its various avatars coupled with permanent photographs fondly ingrained in her mind have given rise to poems that wonderfully depict various themes, from the idea of being a Hindu to the emotions that rise when one’s own motherland beckons one to come back to its shores. The book opens with reminiscences of the past and of loved ones – the memories of her grandmother, fond recollections of the time when her ears were pierced followed by her efforts to learn the basics of the language. The poet then moves on to sculpt an image of her grandfather from scattered memories , ranging from his love affair with poetry to her regret in not having solved the mystery behind his magic tricks.  This is followed up by a poignant account of the degree of yearning her father had for the beautifully picturesque and peaceful memories of his tryst with the mountains of his youth. While the reader travels sedately over boundaries and memories, there come times when sheer fervour and a natural pride in the author’s identity brings forth poems like ‘Where I Come From’ which steadfastly and magnificently declares,

Between a fiery red chilli pepper

A peacock dancing against the setting sun”

‘Geography of Tongues’ is like the discovery of torn and tattered pieces of a map languishing in a long-forgotten corner of the basement.
The book also has its fair share of colourful descriptions through poems like ‘Mad About Mangoes’, which glorifies and vividly describes the varied textures and methods of enjoying the simple wonder that a mango is capable of being, and ‘Blessed By The Banyan’ which beautifully brings forth the mystic charm that has wrapped itself around the much-celebrated holy tree. Humour is also to be found in generous doses as little nuggets of witty wordplay blend in effortlessly here and there. Sometimes, humour takes precedence in poems like ‘This Just In’, a witty take on a fictional disease characterized by an overdose of multiple accents in the victim. At the end of the map, the book meanders off into a rhythmic reminiscence of the days spent on foreign shores and how the poet’s identity mutated into a constant struggle with the environment. Titled ‘Silver Bangles’, the poem ends with a reversal of her experiences when she reconnects with her motherland.

The book, in itself, is a yearning for the true definition of identity, a constant search traced through the contours of the tongue and boundaries that move in and out of lives interspersed with fond and candid memories and vivid colours of different lands. While the author has brought to life sensual, sarcastic, concerned, comparative, proud and a host of other moods while sculpting such wonderful imagery, one cannot help but lose oneself in the sea of memories, the sensual moments, the quintessential Indian pictures, the travelling across boundaries and the topping of humour.  Pico Iyer’s famous TED talk on “Where is home?” is perhaps the best supplement to Shikha’s verses. Iyer’s comment, “My home would have to be whatever I carried around inside me,” resonates with the anecdotes in the book that are essentially broken images and ideas of newfound, mutated, lost and re-discovered identities, all bursting out from the inner reaches of the author’s experiences.  ‘Geography of Tongues’ is like the discovery of torn and tattered pieces of a map languishing in a long-forgotten corner of the basement. Once it is accidentally discovered, the torn pieces are put together and an attempt is made to discover a coherent path for the mind to travel on and to attempt and discover its true identity.

Samantak Bhadra is a software engineer, a writer, a musician, a public-speaking trainer, a social entrepreneur and an ex-journalist. His writings have been accepted for publication in journals, websites and anthologies from places like the USA, Canada, Romania, France, Ireland, India and the Middle East.

“Looking out, I see blind night behind/ & racing in front, the singing wings/ just visible, purposeful, making/ last dashes before the big light goes out…” By Stuart A. Paterson.

Features Editor Sana Hussain wonders whose prerogative it is to dictate the meaning of a work of literature -- the...