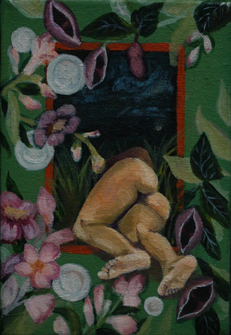 Deborah Rancoff was dead. They recovered her body from the lake this morning; I knew because I was there with the little ones. I didn’t bother to cover their eyes—they saw the blue, bloated skin and the empty sockets and everything.

Mr. Rancoff made sure to make a big scene out of it. When they showed him her body, he threw himself to the ground and screamed like a madman.

I stayed. There was something enchanting about drowned bodies, and I didn’t know how to make sense of it. There was just something beautiful about them. Deborah Rancoff was never beautiful, but her drowned body was.

Marla was the first to speak. She was the youngest and the stupidest, and she had never understood the rules. “Mommy, can we go? I’m hungry,” she said.

“No, we’re going to stay right here,” I replied, and Beth and Jonathan shushed her before she could open her mouth again.

They played with rocks. The police arrived. The ambulance came, and the sirens were so loud, the children grabbed their ears. I told them to lower their hands, and even Marla obeyed.

As they loaded the corpse into the truck, Mr. Rancoff whispered to his wife. They had been unhappy, I thought. But everyone in the town was unhappy. It was a town for waiting, for staying behind and watching grandfathers grow old.

When they finally took Deborah Rancoff away, I stood up. The children stood up.

“Mommy, are we going home?” Marla again. I frowned.

“Can we take the rocks with us?”

“So we can play with something.”

“Yes,” I said. The children beamed, and they threw rocks at each other the whole way home. When we arrived, Mr. Rancoff was standing on our doorstep.

Deborah Rancoff was never beautiful, but her drowned body was.
He and Deborah had lived next door since I first moved here. We used to see each other; he was ready to leave Deborah, too, because she was fat and had wrinkles under her eyes, but he didn’t want the kids. It was always the kids.

He was a big man. He was short and wide and his mother was Italian, so he had a slight accent when he got angry. Right now, he was angry.

“Margaret!” he said. “Margaret, you were there, did you see?” His chin wobbled, and sweat dripped from his droopy mustache onto my patio.

“Your wife is dead?”

The children stopped in a single file line behind me. Jonathan rubbed a bruised elbow, and Marla hummed under her breath. Beth stood like a lamppost.

“Maybe that’s why they suspected you.”

“Mommy, what’s a liberal?” asked Marla. I walked to the patio and opened the door and told them to get ready for a bath; I bit my lip hard when they began mewing like puppies.

“Can we have a bath tomorrow?”

Even Beth protested, lips jutting, eyes watering. They were like dogs—or maybe rats. And when they finally relented, they trudged up the stairs in a single straight line like soldiers.

In the bathroom, they shivered naked before the bathtub. Mud from the lake stained their soft, pink flesh.

The bathtub was only big enough for one, so Beth stepped in first. I scrubbed her back, her neck, her snout, and we didn’t talk.

I thought of the time she was conceived. She felt like an alien in my body, and when the time came, I was reduced to an animal. I wondered if she was even human. Animals did not give birth to humans, after all.

I dried off Beth—scraped the towel against her pink, pink skin, and then she left the room, and Jonathan stepped in.

He looked like his father, so I hated him. That’s the first thing that came to my mind.

Sometimes when he smiled I forgot he was Jonathan at all. I think I was happy inside when I saw his eyes for the first time. Or his hair—becoming thicker and darker and less like mine each day.

When Jonathan left the room, Marla stepped in, eyes bright. She still smiled when she thought I was looking. Her hands still reached for me, quivering.

I scrubbed her back, and she stood ramrod straight so it would be easier. My fingers grated her scalp as the suds dripped off her hair and bubbled into the dirty water.

“Close your eyes,” I murmured, and I dunked her head under, let the bubbles fade into the gray porcelain.

She looked so peaceful under the water, hair radiating from her head like the rays of a star. I remembered Deborah Rancoff and how radiant she looked this morning.

Jonathan looked like his father, so I hated him. Marla looked like me, so I wanted to kill her.

My fingers stroked the ends of her hair, the pink shoulder. I considered pressing her head down. I thought of her limbs thrashing until bubbles no longer escaped her nose.

She would be beautiful. My breath caught. The skin turned cerulean blue, the fingers caught in dead motion, the eyes looking up, reflecting the world, the clouds.

Marla’s head snapped up. She coughed violently, sputtering water until it dribbled down her nose and dripped off her pretty pink lips.

She stared at me. While I dried her off, there was a gasping quality to her large brown eyes, as if she were on the brink of discovery, choking on everything she’d never know. Then it was over, and I dropped the towel, and she scuttled away, leaving wet footprints on the tiles.

Alone in the room, I unplugged the drain and watched the dirty water swirl around and around and disappear. I felt happy.

Madeleine Lee is a high school junior living in sunny, debt-ridden California. She has been published in both literature anthologies and literary magazines like ‘The Oddville Review’, and ‘The Opening Line’. Through her writing, she hopes to provide a voice for the issues faced by her generation. Currently, she works as an editor for Polyphony H.S, an international literary magazine for young adults.

September 1st, 1939  If those who do not know history are doomed to repeat themselves, we are in a tornado. Turning vicious cycles. The…

"The curatorial authorship emphasised in post-internet poetry, the devaluation of originality, reflects the experience of an artist in a culture...