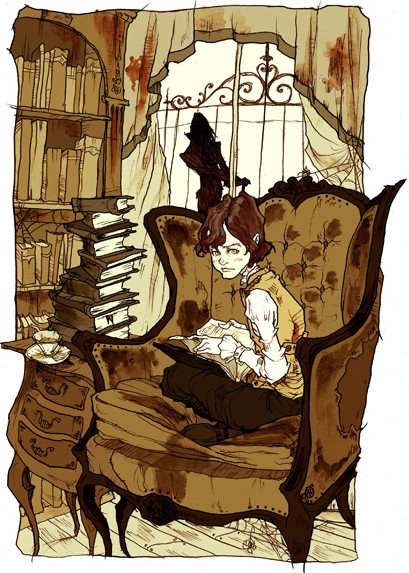 Above: “Waiting” by Abigail Larson

One old writing class adage advises new writers to “write what they know”. It’s sound advice for sure and it’s been known to produce some very good writing, but I can’t help but wonder what happens when what you know can’t be reconciled with what your readers know? For writers from non-Western backgrounds, writing in English automatically opens up their work to Western audiences, but can we truly write what we know and connect with our audiences if some of our experiences are foreign to our readers? Can all of our readers connect with our work when some may not understand the context? That’s the challenge of anyone writing in English about a country or a culture that is not considered “mainstream” in the Western world — a culture the majority of English readers don’t know.

Pakistanis are a people who love stories and story telling. I grew up in Islamabad, where my schoolteachers would assign us stories in English class and in Urdu class. I had learned to read very early on so that by the time I was tasked with writing stories, I had read many of them and my writing mirrored what I read. My Urdu stories would be populated with Ayeshas and Tariqs but my English stories would feature Jessicas, Toms and Henrys. As far as I knew, Ayeshas and Tariqs didn’t seem to belong to the world of English stories because there were no Ayeshas in Enid Blyton or Roald Dahl novels or in “Peter and Jane” and Dr. Seuss books. I was a child and I childishly reproduced what I read, not what I saw; to me, Anglo-Saxon names were a natural part of English stories. Surely, characters with Pakistani names couldn’t exist in English literature, just as characters with British names couldn’t exist in Urdu stories. Janes and Jennifers belonged to the pages of English books, while names that flourished in both hemispheres, names such as Sara and Daniyal, could be permitted after minor alterations to pronunciation. This was, of course, born of both naiveté and a lack of exposure to stories about people who were culturally and racially similar to me. In my mind, it was conventional that English characters have Anglo-Saxon names while Urdu characters have South Asian Muslim names just as it was conventional that English was written from left to right and Urdu from right to left. It wasn’t something I was going to question.

Just last year, Zero Dark Thirty portrayed Islamabad as a desert where people spoke Arabic…
Growing up in 21st century, internet-age Pakistan, there was this sense of the world’s rapid globalization; it was not inconceivable that someone who had never left their small corner of the world would have a somewhat accurate conception of a completely different place thousands of miles away — in fact, it’s what I expected. While attending college in the United States, however, I discovered that intercultural communication is still relatively one-sided. It is almost as if communication between the Eastern and Western hemisphere tends to take on more characteristics of a lecture than a dialogue. The West speaks and the East passively listens — American culture dominates media the world over: Hollywood manufactures movies and the rest of the world consumes them, teenagers across the world listen to the Billboard Top 100 and the Western canon receives praise in classrooms across different countries. The other side of the world is more isolated: foreign films have a very niche audience in America, you would be hard-pressed to find Pakistani music in the iTunes library of American teenagers and hardly anyone in the West, outside of the academic world, even acknowledges the existence of a rich Eastern canon. A large part of this divide comes down to language barriers, of course. English is the lingua franca for most of the world — it’s been widely exported outside the small borders of its native England — and it’s much easier to export culture when you’ve already exported language. Though this explains some of the reasons for the one-sidedness of intercultural communication, it certainly does not solve the problems that arise from it.

When I first started college in the United States, icebreakers and small talk would of course bring the dreaded “where are you from?” question. When I would say Pakistan, I was sometimes met with surprise at my command over the English language. I grew up bilingual, meandering out of English into Urdu and back again — something that is pretty common to Pakistani middle class experience. So I felt strange when they complimented my English: we had very probably learned the language at the same time, but I did understand why they wouldn’t know that. Had I grown up as they had, seeing the images of Pakistan that populate American media, I would have been surprised too. Just last year, Zero Dark Thirty portrayed Islamabad as a desert where people spoke Arabic — a far cry from the lush valley where Urdu, English, Punjabi and Pashto are most commonly spoken and learning Arabic is a distant dream for many.

Virginia Woolf wrote about the struggles of writing as a woman in mid-20th century London in her essay ‘Professions for Women’. For Woolf, years of cultural repression of women’s voices had rendered women writers unable to express themselves without first vanquishing the burden of cultural expectations. Though Woolf knew her road to writing had been paved by women writers such as Fanny Burney, Aphra Behn, Harriet Martineau, Jane Austen, and George Eliot, she still felt the pressure to be the tender, flattering and sympathetic “Angel in the House” who would not “let anybody guess that [she had] a mind of [her] own”. Woolf termed the expected ideal of femininity the “Angel in the House” after the self-sacrificing heroine of a 19th century poem. Woolf struggled against the Angel in the House every time she picked up her pen; as a Muslim, Pakistani woman I struggle with the double-glazed glass ceiling that comes with being a minority writer and a woman every time I write. Womanhood was conflated with the sort of self-sacrificing spirit that extended to a total repression of the self in the concept of the Angel in the House, just as non-mainstream cultures are marked with an air of mystery and excess.

The literary conception of the Indian subcontinent, for example, has been historically defined by geographical distance, excessive luxury and the fantastical objects imported from India that allowed India to become — in Edward Said’s words — the mysterious Other in the Western canon. This one-dimensional portrayal of non-mainstream cultures implanted in the Western imagination the idea that the Orient (or the East) is to be admired for the luxuries acquired from it and reviled or ignored for the darkness that is always associated with it, but any investigation of it is to always remain skin-deep and in line with all previous conceptions. In this conception, fiction set in the East is often expected to be exotic, mysterious and fascinating simply because of its setting rather than any elements of the narrative itself. Woolf said women writers were “impeded by the extreme conventionality of the other sex”, I believe international / minority writers writing in English run the risk of being impeded by the extreme conventionality of Western-centric literature.

Contributing writer Kamran Soomro writes about the evolving relationship between logic and faith.