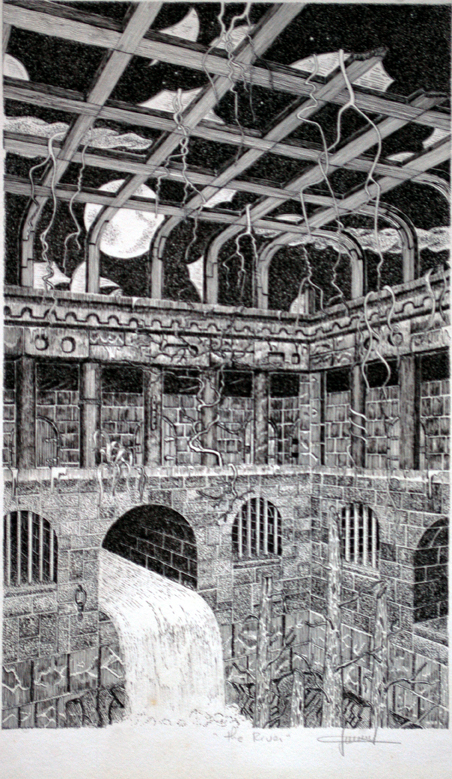 Are fences childhood? Rough, grey,
wooden and forever present where meadow
begins, the forest. It’s glistening green,
the bushes are swaying, the grass, amidst
the wind. Wind, indeed, it comes and goes, suddenly.
It topples threats, by another hand.
Has someone stayed away?
On the fringe of the house, the fence, with
its gloomy outlook. And whenever reason
and anticipation are at a loss,
it collapses, the brittle and rotten companion.
Where it stands still, there is time. Deep
like a well. The bugs are rustling among
the leaves, book pages are rustling, unasked.
And dreams go in and out, with
black borders. Fire! Father is in
the war! Mother is washing her hair, as
though she was pulling it out of a distant tub.
It is raining hair. And no fanfares
far and wide.
Only questions. How to go onwards,
to where, with whom.
The child gazes. It sees meadow, forest,
wind. It doesn’t distort its face to
cry, not yet. Being alone has its
quirks, mother waves, the child eats
its mirror image. Faster than fast
greenness sinks into blackness. And
remains silent in long corridors.
Are images poaching riddles, signets?
Do they chant memory? To
some back-then, which is today, there and
back? The scenes plunge into each other, cut
by cut: the surge of the forest into
the goose step of the soldiers; mother’s
eyes into sprawling, unrestrained pain; and
the shadows of fences and Leonardo
da Vinci and the scarfskin of the sky
into icy metaphors.
For warmth, somebody is always missing. Whose
voice resounds through the images: I
left my kin and the warmth of the hearth.
And I have received grey like
frosty rime early in the day. And my own laughter and
my own sorrow I hear as a fading
echo from afar. The father. Nobody but those
like him knows Russia’s lexicon
forever denotes death.
If there are white-white days to be had,
then the snow smells as sweet as
the slaughterhouse. If there is love to be had,
then it is falsehood and farewell.
If there is rain to be had, then no word
appeases it, no cloth wipes it away.
If there is a song to be had, then every line
grinds the knife in the poem.
If there is a family to be had, then
the unexpected visitor doesn’t show up during dinner.
If, then.
The child drinks dove-grey milk.
It listens to the grass roots and to
the language of the birds. It swims in the pond
like a puppy, a bare shorn wretch.
And hangs on to its mother’s skirt, until
it falls down. There she is already flying, hovering
beneath the crumbling plaster. Who has
managed to create this nightmare. Still
nights follow upon nights. Images
of fear. Warped and shuffled images. With
dilapidated interiors, more dreamed than nearly.
With doors, backdoors, into the cellars
of terror. Dammed and confounded days
obliterating even what is untouched and unhurt. Hard
for the small joys to take a stand against
them. Cat, book.
But we? Float through the images
the mirrors of mirrors, from the fence
to the dream, from child to child. Gazing
at memory loops. To trust the
senses, in the zigzag of time. Does the white chicken
beat its transcendent wings from the other side?
Does the lapis lazuli glow upon the ear
of the pregnant women for humanity’s sake?
Does happiness have an infant’s face?
In the diapers of light, Bach’s Passion
sounds lovelier than any wind.
And loneliness gains color.
Mother, son. Adjoining, the fence,
the forest. One might take them and make
her peace with them, at the end of all yearning.
After childhood has been vividly
spelled out.

Ilma Rakusa was born in Slovakia in 1946, and moved to Switzerland with her family in 1951. She currently lives in Zurich. She has published numerous poetry collections, short stories and essays, and numerous translations from Russian, Serbo-Croatian, Hungarian, and French; she has contributed to major newspapers including Die Zeit and Neue Züricher Zeitung. She is a member of the German Academy for Language and Literature.

Paul-Henri Campbell, born 1982 in Boston (USA), is a German-American poet and translator. He studied Classical Greek Philology and Catholic Theology. He is Managing Editor of DAS GEDICHT Chapbook. German Poetry Now, an annual anthology that presents poetry from Germany, Austria, Switzerland, and Israel in English translation. Current collection of poetry: Am Ende der Zeilen | At the end of Days (2013).