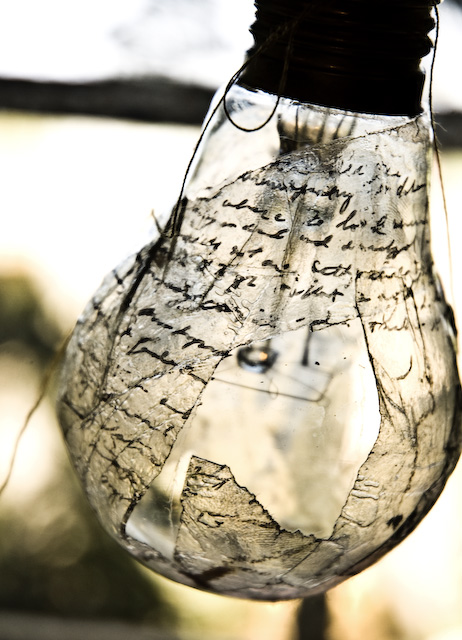 Darwin Mother had a peculiar taste for silver and dandelions. And in a yellow house down the street, she lived all alone.

At precisely ten each morning Darwin Mother sat on her front porch to read a romance novel, just the way she had done with her late husband Andrew while he smoked a cigar and read The Brownwood Bulletin. One day near the end of May I came to the steps of her porch, a trembling in my knees.

Despite my fear, Brownwood, Texas had still been a safe enough place, and the front doors remained open and welcoming. Back then neighbors were friendly and smiled and waved you in to have some hot pecan pie topped with vanilla ice-cream.

On that particular day she was not on her front porch but her book lay open on a stand beside a rocking chair. I hesitated, not wanting to interrupt Darwin Mother from whatever it was she was doing inside. Then I wrangled what courage I had (more so from fear of my father’s retribution if I did not do as told), knocked and hoped she would let me cut her yard for ten dollars or a little more. She came to the screen door, looked over me as if I had burned a batch of her apricot muffins and asked,

I stumbled through my thoughts for a few seconds and found myself unable to explain why I was there. Standing in front of her it struck me that this was the first time in all my fifteen years that I was speaking to a woman alone. No parents were there to make me seem childish. No siblings to interfere.

She had one hand on her hip as the other hand pushed open the screen door between us. I looked into the shadows and dust rays that filled her front hallway. A grandfather clock stood alone and frozen at the time of two-forty and I found out some time later from Darwin Mother that this was the exact hour her husband had died from heart failure in the laboratory across town.

‘Are you listening to me?’ she said. She rapped me playfully on the crown of my baseball cap. ‘If you’re going to greet a lady then you begin with an introduction, and your name is the likeliest of places to start.’

I drew a blank. I did not know what to say. Her white dress had a slit in the front and her cleavage showed drops of sweat rolling down the center.

If I had not spoken when I did, Darwin Mother would have assumed me as a mute as well, and I would never have heard the end of it from my father.

Most of the boys in the neighborhood had given her the nickname Darwin Mother since her late husband used to be a scientist…
I removed the ball-cap to show her I knew a thing or two about gentlemen callers, and told her how my parents had named me Charles after my grandfather Charles Amadeus Ledbetter. I finished by saying it would do me much pleasure if she simply called me Charlie.

The sun from the late afternoon was on the back of my neck and sweat beads trickled down my back and into my jeans. The way she looked at me distrustfully, I half suspected Darwin Mother thought I was the same boy that had cut her yard the month before (though I clearly was not).

‘All right, Charles,’ she said, much to my excitement. ‘Be here this Saturday and I’ll show you around and tell you what needs to be done. There’s the backyard and hedges along the fence up there in the front. I’m assuming you have your own equipment?’

‘Yes. Seven in the morning,’ then she added, which I thought was rather too snobbish at the time, ‘on Saturday.’

‘Do you have your own mower?’

‘Be sure to get permission before you do.’

‘See you then, Charles.’

‘Yes, see you…’ and I was uncertain as what to call her because most of the boys in the neighborhood had given her the nickname Darwin Mother since her late husband used to be a scientist and no one knew her name. The name, however, stuck and even mothers and fathers called her Darwin Mother. Not to her face, I don’t think.

‘Call me Evelyn,’ she said. I never liked that name and have never called her by it.

With the banging of the screen door I had my first paying job, and I also knew I had just made my father proud.

“This blonde and grey-eyed woman,/ her fingers combing a prisoner’s hair/ in a barn, a field, a hidden somewhere/ in that wartime summer.” Poem of the Week (August 31), by Harold Hoefle.

In the second part of a series, Michael Dodd explores how 9/11 caused a spate of American horror remakes and...