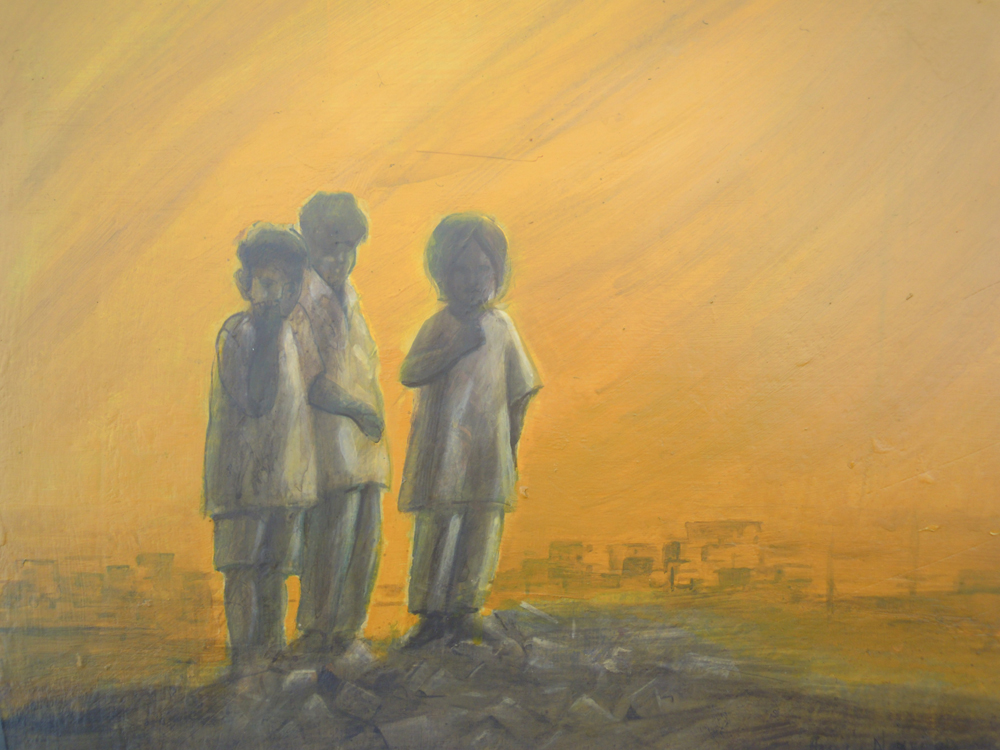 It was the first day and it had been fine just a short while back. He had almost started to get comfortable. His eyes were adjusting and the sun felt warm on his skin.

But then the Voice had started booming, picking them off one by one. Each boom of the Voice met with a meek reply, before the meek replier was felled. It started towards the front and moved slowly towards him. Relentless. Like the truck.

He kept seeing the truck in his head, ever since he watched it run over the dog. That was yesterday. The dog had been hit by a car and sat there, leg broken, in the middle of the street. The truck turned into the street from a couple hundred feet away, a rumbling shining beast. It saw the dog. It did not stop or slow down. With a blast of its pressure horn it ran over the dog. He caught a glimpse of the driver. The driver was laughing. He stared at what was left of the dog, a flattened sack of pulpy goo, doused in blood. The dog’s button eyes stared back at him.

Right now he was the dog. The Voice was the pressure horn. In its blaring roar it told him what was in store.

He stared at what was left of the dog, a flattened sack of pulpy goo, doused in blood. The dog’s button eyes stared back at him.
The light pulled away. It knew his fate, and it wanted nothing to do with what was about to happen. Soon he could barely see at all. His vision tunneled until it was just a pinhole surrounded by gloom. He dared not look up. He stared at his hands but could only see a little pink dot on one palm. All else was swirling darkness. The Voice continued booming out there. He felt the pulses of his throbbing heart run through the length of his body. His staccato breaths were drawn and released in wheezing, hissing bursts. Damp hair clutched at his temples. His palms were moist, and his toes.

The Voice came near. Each time it boomed he shook even harder. The replies came from close now, somewhere in the darkness. Closer and closer. A rumbling boom, a pleading whimper, then silence. Rinse and repeat. The bloated black silence was the worst. He willed himself not to scream. Soon the Voice would be upon him.

He wished he could run away but he couldn’t. Like the dog, his legs did not work. They existed somewhere out beyond the pinhole of pink that was his world, no longer under control.

The Voice boomed again, and someone next to him squealed. Any moment now. He could not move. He wondered what the dog had felt, what it had thought, moments before being flattened under rubber and steel.

The Voice fell like thunder upon him. The force of it shattered his internal world. He felt it, radioactive, poisonous, passing through his body. Somewhere in its rumbling depths he heard a name. His name. The time had come. He couldn’t stop shaking. He couldn’t look up. He tried to feel his throat but couldn’t. But he had to reply! It would be suicide not to. He willed every ounce of energy he had, every wriggling, twitching bit, and forced himself to say the word that the Voice longed to hear…

The Voice moved on, the focus of its attention passing him by. His vision slowly returned. He could make out his hands, clammy and clutching each other tight upon a wooden surface. He could see the white sleeves of his uniform. He looked up. He saw the other children around him, each sitting behind their little desks. Sunlight streamed in through the window again, caressing his skin. He breathed deeply, watching his striped tie rise and fall. The air from the ceiling fan felt cool. The old teacher continued her roll-call in a soft voice, reading out names off a sheet of paper. Scrawled on the blackboard behind her was a single word: “Welcome”.

He began sharpening his pencil in preparation for the class. Fervently he went at it, his eyes bulging. He saw the mangled face of the dog in each curl that fell to the desk.

Omar Gilani is a digital artist, writer and professor and is currently an Associate Professor with National University of Science and Technology in Islamabad, Pakistan. His work served as the cover for our 11th issue.

“borders are like seams/ they must be sewed/ tightly to hold…”
A poem against borders, by Ottilie Mulzet.

"They threw acid on her while she slept. I heard it got all the way down to her hands. Her...