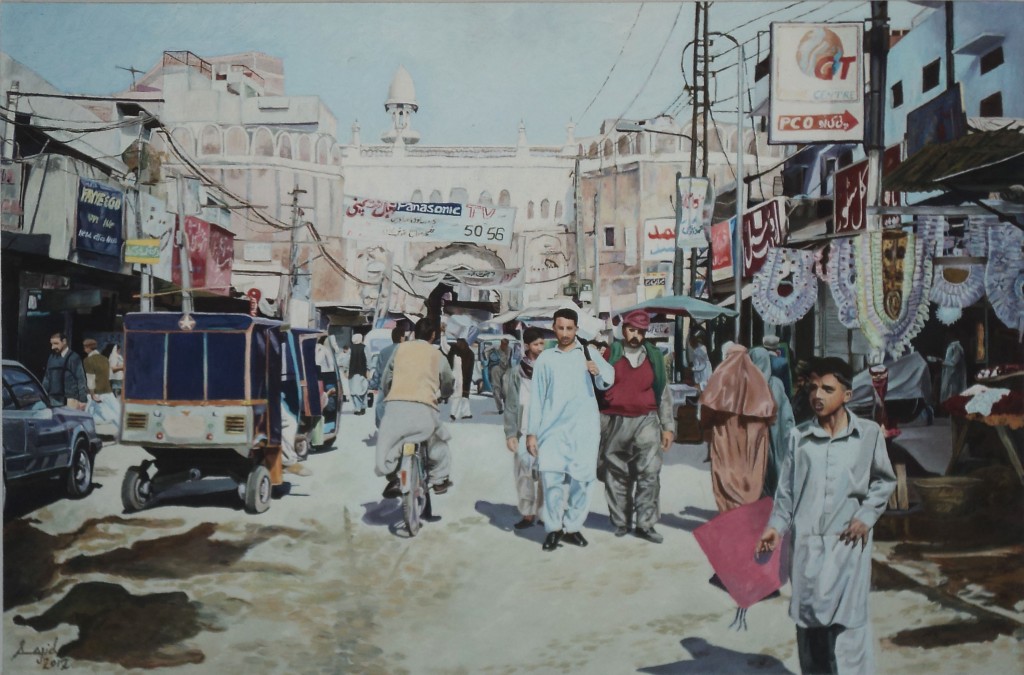 I was surprised though, usually I could always spot the outsiders easily. And I know most of my students. Even though most of them have the same cars and bank balances and sport similar accents, as if they were all born with an American passport. How very condescending of me, you must be thinking. But you see, I know them, because I am just like them. And at first, when I came back from England I wanted to shed this side of me, but eventually I settled in, found comfort in my mediocrity and burgerness. I don’t think I am judging them, I see them as myself, similar with no aim to change my status quo. And why would I? I am comfortable in my afternoon breaks with cigarettes and books, and my lectures on economic and social development.

But I sit here every day, whenever I get the time, and I watch people. I smoke quietly in my small faculty office daily as well, and it’s not that I need a reason to sit out here and smoke. But I sit out here because I need a reason to observe people. And sometimes I see the other kind of students too. With their non-branded clothes and motor bikes. They’re a smart bunch, they complete their reading and participate in class, and it is because of them that I have started to feel comfortable in explaining concepts in Urdu as well. It’s not that these students don’t understand English or that they do not speak as well as the others, it is only that they speak with such ease that I start to feel that maybe I am the outsider here. As if the masks of accents that the burgers have, are barriers to their own understanding. I don’t like to praise a student just because they have spoken about their trip to Italy with an accent, in reference to how the political economy of the Italian states was during the Machiavelli’s time. That is just absurd. Correct pronunciation can take you far. But an accent cannot do that. It can perhaps mask your incompetency. Or maybe I am being too harsh.

These privileged brats would gather around those street children, taking the photograph of the same subject from a thousand angles, as if they were in a human safari.
Perhaps we are all outsiders.

As I watched the students run towards their classes, I picked up my half empty bottle of water and my book and left for my office. When I reached, the canteen Chacha had already placed a tray of biryani with coke at my table. I opened the window next to my seat and took out my ash-tray. I think boredom is turning me into a chain smoker. Like other Lahoris eat out of boredom rather than hunger, I smoke out of boredom in the absence of a social life. What is a late twenty something who teaches courses to early twenty somethings, supposed to do when the only free time she gets out of the campus is when most of her colleagues are taking their families grocery shopping? You see, I spend most of my lazy time chain smoking and preparing for my lectures. The rest of the time I sleep and watch people at my campus. I open my university email, and notice an email from a ‘Mr.Rocky4U@hotmail.com’. It reads:

(‘Miss, I hope you don’t mind me saying, may I talk to you about something? I think you shouldn’t smoke, men look bad smoking, imagine what women look like. It is forbidden in Islam.’)

If I received this email on my official university email, it has to be a rocky from the university. I delete the email and start eating my biryani. I go back to the trash folder and retrieve the email and read it again. I forward it to our staff counselor. I get an automated response telling me that that he is grateful that I contacted the counselor at a difficult time for me. And he is away for a training workshop, and that he will get back to me by two weeks.

I once volunteered to take my colleague’s class for a photo walk in the old walled city. It’s a liberal arts college, where I teach, and my course falls under the social sciences and humanities department. The lecturer for Photography is an art major. She had a job interview at a fashion magazine during that week, where part of her test required her to assist a fashion photographer at a shoot. Anaya and I eat lunch together sometimes. She asked me to take her class for the photo-walk which was essentially a chaperoning job. The students were to be left to their devices with their cameras and supervised through a distance. At the end of the two hour session, I was to gather them at a pre–decided spot and take them back in the university bus, back to the university campus. Since I was bored with grading my papers and stalking my Facebook friends from school, I decided to take the opportunity and supervise the class.

I remember this photograph that I saw once in Anaya’s database of a young African girl standing inside an area marked by a fence, and several white people behind the fence were staring or cheering at her. One white woman was feeding her a banana from behind the fence. This photo was titled ‘human zoo’ and it unsettled me for days. I couldn’t shake the image from my head. When my young students with their expensive DSLRs were shooting their subjects, most of them used to gather around either very old men or women or young street children. I heard one of them say ‘beautiful’ and just as soon as he was done with the photo, he left the smiling subject and moved onto another sitting in the corner of the shop with a shawl. It reminded me of the photo that I saw at Anaya’s. These privileged brats would gather around those street children, taking the photograph of the same subject from a thousand angles, as if they were in a human safari. I don’t understand why people call this documentary or street photography. Or whatever the new genre is. What did they know about their subjects? What did they know about their subject’s dreams and fears? Did they bother talking or laughing with any of their subjects? At least fashion photographers do not make any claims. Not many did. Maira, the girl with the green nail polish and the most expensive Nikon camera and a super Lens, did care. I saw how she sat down with an old woman and asked her about the vegetables that she was selling with her son. She shared her packet of chips. And then she took out prints of photographs she had taken before of the woman, apparently on her last trip to the walled city with her friends, and gave them to the woman. The woman looked at them. She smiled. And then she called her son out from the back of the shop. She showed her the photographs, as the old woman laughed loudly and joked about her son and his friend. The old woman asked the son to get samosas for Maira. She declined, and pointed to her watch saying she had little time. The woman gave her a hug. The girl with an American accent and the most expensive camera hugged back.

“We keep our noses in our private chess games. But at certain moments in our lives this changes. Then, it is as if we get permission and the situation demands we lift our gaze….” New Year reflections from Knud Sønderby, translated from Danish by Michael Goldman.

"He stared at what was left of the dog, a flattened sack of pulpy goo, doused in blood. The dog’s...