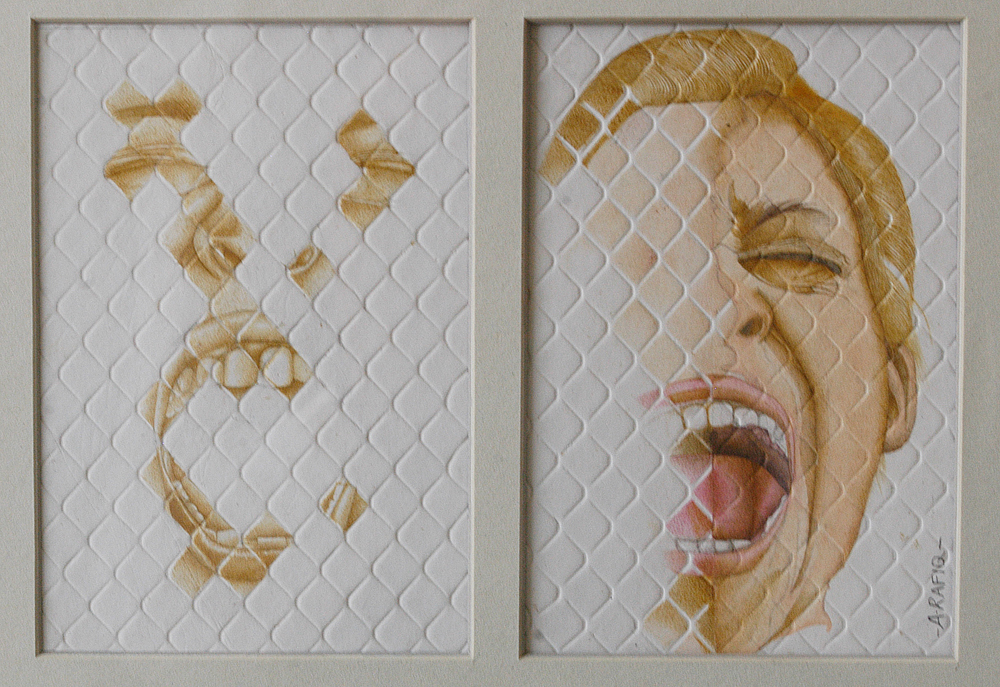 ‘Fourteen, fifteen, sixteen,’ she counted, as she washed away the invisible dirt from her hands. They did seem almost clean. Maybe she would apply soap just once more, and that would be perfect. So again she worked the hand-wash into a lather. Then carefully she wiped her hands on the towel, one finger at a time, then all together, then each finger again. She looked at her clean hands. They were white from dryness, and in parts the skin had hardened to an almost black shade. Very soon it would break into cracks.

He heaved a heavy sigh as he parked the car outside the house. It had been a long day at work. It was dark inside the house, nobody having turned the lights on. And there was no sound except for a monotonous sound of running water, and the recurrent cycles of the washing machine. He made his way to the light switch, and turned it on. The breakfast he had made for her that morning still lay on the table. He heaved another sigh and walked into the kitchen.

The washing machine continued its never ending whirling of cloth and water, the foam rising above them. She bent over it, rubbing a white shirt under the tap which continued filling the machine. As he came in she looked up, her eyes weary, her back bent and hurting. She pushed some hair back from her forehead with the back of one hand. She looked at him half shamefacedly half defiantly. Enslaved by herself, she was evidently in pain. He was too angry to see it. Holding her by the shoulders, he shook her hard.

“I’m only washing the clothes,” she answered quietly. The words sounded hollow even to her own ears.

“Washing clothes? It takes you the whole day to wash clothes?”

“You know I can’t help it,” she said in a weary voice.

“Yes you can’t help it. Because you don’t want to help it!” his voice still raised. “I have spent all my savings, but no doctor could help you. You just don’t want to try”

“Well then let me tell you it’s not easy for me either.”

‘Three, four, five,…’ she counted, as she stepped up the staircase. ‘ Eleven, twelve, thirteen,’ she had done this so many times before. Always there were fourteen, and always it was the left foot that needed to take the last step. So she halted with both feet on the thirteenth. Then put the right foot onto the last step, onto the first floor. The right foot should always go last, as also it should always go first. Right-left, right-left she walked. Exactly thirty two steps into her room.

There was a knock on the door. She looked through the peephole. It was her mother again. In spite of all her disappointments she still came. She carried a bag of apples. As her mother settled down on a sofa, she thought of the last time they had met. Her mother had been too angry to ever want to see her again. But here she was, smiling as if nothing had ever happened. Why couldn’t she just give up, and let her dwell in her misery? Why did she have to make her guilty by wasting her life on a worthless daughter? For a fleeting moment the guilt turned to blame, and she wished her mother had been stricter with her earlier. The feeling was put aside, and she again resigned herself to her fate.

The clock has just struck one in the night. She had heard a sound that had woken her up. She sniffed. There was a peculiar smell in the air. She sat up. It was strange, She smelled smoke. She got out of bed, Fifteen steps, and she was at the door. She pulled it open, and her eyes widened. The place was full of smoke. She coughed, covered her face with a handkerchief, and walked forward. Then opened the door to the staircase, and wild flames surged upwards. She reeled back. Then calmed her beating heart. Her mind thought quickly. She must run down before the fire engulfs the whole place.

She walked down ‘One, two, three, four’. She was startled, as an enflamed rod fell towards her. She ducked. It hit the railing instead. The railing caught fire. She stopped for a moment, then moved on. ‘Five, six, seven, eight’. She was nearing the end. But before she could take the last step, the step was engulfed  in fire. She looked around. She seemed to be completely surrounded with flames now. The heat scorched her body. Large objects were breaking down, the house was falling apart. The voice of a man brought her back to her situation. He was at the bottom of the stairs, her husband, calling her to take his hand and jump. She looked at him, at his face from between the flames.

Unaiza Tariq is currently settled in the United States, where she lives with her husband.

Richard O’Brien examines the history of the verse drama, and asks whether the decline of blank verse has to be inevitable…

"These privileged brats would gather around those street children, taking the photograph of the same subject from a thousand angles,...