Tired of dipping into the same limited canon of scary movies every October? Feeling the need to confront some more obscure shadows this Halloween, take a leap into the unknown? The Missing Slate’s film team are here with a selection of alternative horror favourites for our bolder readers to explore…. if you dare. Bwahahahahaha. Ha.

Like many people, I assume, my introduction to Stuart Gordon’s Re-Animator was through another film. There’s a scene in American Beauty in which Kevin Spacey’s Lester Burnham uses a discussion about Re-Animator as a cover to buy pot from his neighbour. The description, as a film in which a body carries its still speaking severed head around before said severed head performs oral sex on a woman, is enough to spark the curiosity of any young cinephile of a certain disposition. Re-Animator is a fine film, one of my personal favourites and recently named the 11th Best Independent American Horror Film by the fine folks at The Dissolve in addition to being one of their movies of the week. However, lurking libidinally in the shadow of Re-Animator is the less heralded From Beyond.

Released the year after Re-Animator, From Beyond reunites director Stuart Gordon and producer Brian Yuzna with Jeffrey Combs and Barbara Crampton for another adaptation of an H.P. Lovecraft story. Combs’s Crawford Tillinghast is a young scientist studying under Ted Sorel’s Edward Pretorious, who is looking to transcend the natural boundaries of human experience. Their experiment with a machine, the resonator, is meant to stimulate the pineal gland, theorised as a dormant sensory organ. Naturally, this experiment goes fatally wrong. Tillinghast is left shaken and clinically diagnosed as schizophrenic before Crampton’s Dr. Katherine McMichaels orders a CAT Scan that shows his pineal gland to be enlarged. The logical next step is, of course, to re-mount the experiment.

From Beyond tugs further at the thread began in Re-Animator, exploring how knowledge or transcendence of human physical limitations results in a re-emphasis of the physical, its needs and desires. The film’s practical effects are, as such, appropriately sensual: wet other-dimensional worm bodies writhe and humanoid creatures phallically elongate their fingers toward female bodies. Combs and Crampton give performances that suit the film’s morbidly ecstatic tenor, with Combs’ line readings in particular resonating with the same manic sincerity that enlivened his Dr. Herbert West in Re-Animator. The film’s forays into over-indulgence, and some light BDSM play, may not be palatable to some, but are perfectly in keeping with a film whose raison d’être is to “see more.” – Ben Hynes

What would Halloween be without the master of suspense? I bet I know which film you’d most likely watch too. Who can resist the irrepressible screech of strings as the shower curtain is pulled back and cinema’s most famous murder unleashes its haunting power once again? But if you want to go in a different direction and sample a lesser known work from good old Hitch’, then you can’t go too far wrong with Frenzy. Made towards the end of Alfred Hitchcock’s career, this picture offers fascinating insight into the depths 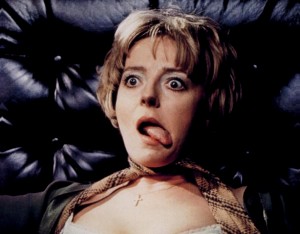 of terror the great director might have been able to explore even further had he not been so restricted for much of his career by the stringent censorship of the day.

Even for Hitchcock Frenzy is a dark film. Though the themes are much the same as they always were in his work — murder, lust, the struggle of the wrong man to clear his name and a uniquely morbid sense of humour — it is the uncompromising and repressively claustrophobic tension that gives this particular movie a special place in the canon. Unease and discomfort permeates the film with each horrific act of deplorable violence. Watching Psycho yet again is fun in spite of the film’s classic terror, but Frenzy never gets any more comfortable to watch. The sheer helplessness as an audience recognises the danger that is about to befall our heroes and being powerless to help, the injustice, and the revulsion are hallmarks of the experience of watching this film. You want to be scared by the master of suspense? Truly horrified? This is the film for you. – Michael Dodd