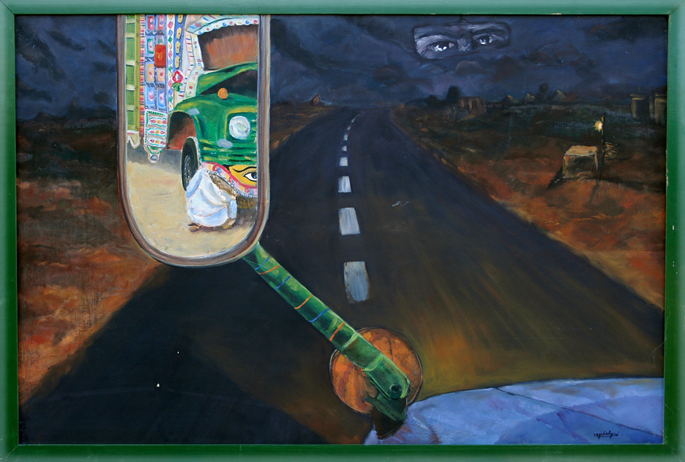 The rabbit-hole went straight on like a tunnel for some way, and then dipped suddenly down, so suddenly that Alice had not a moment to think about stopping herself before she found herself falling down what seemed to be a very deep well.

I close the book and step off the tube at Tooting Broadway. Outside the dimly lit station grey clouds eclipse the sun, and for a moment, the whole street is engulfed in darkness. It’s two o’clock in the afternoon, but here in London, it is neither night nor day.

A squealing of tires, the grinding chatter of mixed tongues and a rabid odor of waste and pungent spices surrounds me.

I haven’t been here for ages.

On the sidewalk a shopping trolley stands abandoned, and next to it stands a band of old young boys with flapping Rasputin beards and listless hands. Thin, frenzied children trail behind grim faced women in dull black chadors and a Hallal butcher leans against his counter, listening. Outside his shop a Somali man is calling upon Allah to come down and teach the pound shop owner a lesson for over charging. And above all this looms a Primark sign, shadowing the street with its big bold letters. The effect is chaotic.

I think of Karachi, the city I left behind.

I walk down the High street towards The MADINA Store. Someone has spray painted the last three letters with black paint so that the shop front reads The MAD Store. A large Warhol type poster of a man in a checkered headscarf aiming a machine gun decorates the door. Right next to it is a banana yellow poster of Uma Thurman’s Kill Bill. ‘And Blair and Bush too,’ someone has added with a marker.

Inside, the shelves are crammed with every possible item. Rows of children’s toys sit next to bras and wigs, painting supplies are stacked next to spices and in the back a large glass cabinet is stuffed with ‘Used’ mobile phones. A SALE sign sits placidly amidst the busy bustling shelves.

Behind the counter there are rows of Bollywood DVDS and eye popping film posters. In one of them, Shahrukh Khan’s heartthrob face is twisted with rage and a wide-eyed, almost naked heroine is staring up at him. In front of this display, stands a bearded man, lazily chewing beetle nuts.

‘A five pound calling card to Pakistan and a copy of the New Asian Woman.’ Hesitantly I add, ‘And a pack of Marlborough Lights.’

He grins and I shift my weight from one foot to another. Under his stare my shirt seems too short and the jeans I am wearing feel too tight. I put on my jacket though the shop is warm.

As he hands over the pack, he asks if I’ve seen the new Shahrukh Khan film.

‘I’ve got a clean print. Not at all pirated, and for you, only six pounds.’

The six comes out as sex and I glance at the neon sign flashing above his head. ‘BLUE films sold here,’ it reads. I wonder if he is trying to sell me some. I’m about to tell him, ‘Don’t you have any mother or sisters,’ when I see the small lettering underneath the BLUE.

He turns around to see what I’m talking about and laughs. I see a flash of rotting teeth as he says, ‘It’s a free country. People can watch what they want. Yeah?’

I don’t answer back.

‘I wish they’d get the trial done,’ she thought, `and hand round the refreshments!’ But there seemed to be no chance of this, so she began looking at everything about her, to pass away the time.

On the sidewalk a shopping trolley stands abandoned, and next to it stands a band of old young boys with flapping Rasputin beards and listless hands.
Outside, the smell of curries and kabobs is overpowering.  I feel a mixture of nostalgia and nausea overcome me as my stomach gurgles and I glance up the road to the Curry House & Takeaway. It’s buzzing with lunch time customers. White, Black, Indian and Pakistani all huddle together under its squat roof, savoring Britain’s best recipe for harmony, Chicken Tikka Masala.

Steam from the food has fogged up the windows and the people inside seem to be drifting in an otherworldly haze. As I get closer, through the glass I see a bald Asian man bent over his plate. His face is close to the food slurping the last of his curry like a cat. With deft fingers he swipes the plate clean, then licks his fingertips and smacks his lips. Next to him, a White woman shifts in her chair. She is glances nervously at her partner who’s waiting at the counter to be served. In between the furtive glances, as if she was in a thief’s den, she picks at her naan bread with her fork and knife and takes great, big swigs of water.

‘No dogs allowed.’ ‘Hallal only.’ ‘Bestest Takeaway in Britain.’

Garish stickers greet me at the door and a loud bell jangles my ears as I push open the door. The owner looks up from his till. He takes in my dark skin and tight jeans and scowls at the cigarette in my hand. A waiter lets out a low whistle and a Brown man in a long white Arab dress glowers at me. I hold his gaze, even as sweat gathers in my palms. He glares back and my defiance melts to a plea.

Am I the only one feeling this way?

In front of me stands a fat woman wearing a tight Punjabi suit, her head covered with a slippery scarf-like dupatta. On each side, a child clings desperately to her and a baby is cradled against her shoulder. She is young enough to be my age, yet older than I could ever be.

Behind me stands another girl, also by herself. Probably a student, I think. She is wearing jeans and sneakers. She pushes back her jacket hood to reveal a skull tight hijab.

‘Sister, it is your turn,’ she says. I step forward in my high heeled boots and clutching my jacket tightly around, order a biryani to go. Despite the protests from my hungry stomach, I do not feel brave enough to eat here alone.

The man taking my order takes in my accent and asks, ‘Indian?’

Silently, I shake my head.

I shake my head again.

‘You don’t have a British accent.’

He looks up as he packs my food. Imposter, his gaze seems to say.

‘I was born in Pakistan.’

He heaves a heavy sigh and slips in a flyer not too discreetly, as he hands me my food. I step out in the cold sunshine and take great big gulps of air. My whole body smells of curry and the smell moves with me as I walk.

I come across a dustbin spewing with empty cartons, old newspapers and broken beer bottles and pull out the flyer from the paper bag. I already know what it will be about. I reach out to trash it but my hand hovers over the bin. A voice rings in my ears. It is my mother’s voice. Words laced with fading yellow edges trace the air around me and I think back to a time when as a child I played on the roof of our house in Karachi.

Ma is bending over me. Her chador shadows her face, casting a dark glow between us. ‘It is a sin to throw away Allah’s name.’

In my head, I can see what would happen in the next few days. Having carefully folded the paper in my pocket, I would look for flowing water to put the paper in. This was the only honorable way to dispose of material with God’s name on it. Or so I had been taught to believe. A belief I found hard to discard, unlike others which I had shed in the first few years of my stay here.

‘I’ll think about hell when I get there,’ I say and reach out to bin the flyer. But some small beliefs are harder to let go of than others. I take a long drag on the dying cigarette and exhale slowly.

The paper still flutters in my hand.

She, Alice, was just saying to herself, ‘if one only knew the right way to change…’

Poem of the Week (April 16), by Michael Salcman

Our shortlists for the 2015 Pushcart Prize. Now it's your turn to vote to determine the final list of pieces...