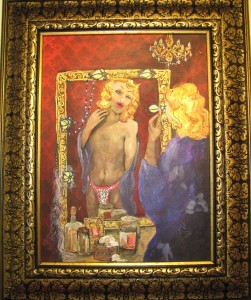 i left the room and you before the mirror
trying on your new year dress and giving your lover
a call: every scene has its rules for actor
and drinker · got nuts and gin from the closed bar
and read what Aelian knew about Erice · no lack
of proems here: five courses and mine plump host
with jowls blue-shaven almond eye and gaze downcast
under half-closed lids · against the pane the twig’s drag
scanned the dark beyond the half-round of the coast
then suddenly snagged · the vowel of the wind
complimenting you once again i raised my glass for a toast
but something had curled up under my ribs blind
with lust · startled by a dog’s yelp a flurry
of birds arose from the night’s dusky
galleries alighting on the crown · it was known
that they were your retinue and had vanished over
the sea but that one had returned a few days later another
its plumage red almost golden · the feast was in your honour
the door ajar i saw you uncovered in sleep the phone
by your pillow at your feet the costume for a nude undone
baglio santa croce 29 XII 00

~ Raoul Schrott, trans. from the German by Iain Galbraith

Born in 1964, brought up in Tunis and Tyrol, Raoul Schrott writes poetry and fiction, and is a prolific translator and essayist. His translation of the Iliad, together with ‘Homers Heimat’, a monograph challenging orthodox views of Homer’s cultural background, appeared in 2008. Much of his work reflects a keen interest in science, ‘Gehirn und Gedicht’ (2011), for example, co-authored with the neurologist Arthur Jacobs, offering a ‘neuropoetical’ study of the activity of the brain in writing and reading poetry.

Iain Galbraith has won the John Dryden Translation Prize and the Stephen Spender Prize, as well as publishing his own poems. He is the editor of five poetry anthologies, while his recent translated books include a selection of W.G. Sebald’s poetry, ‘Across the Land and the Water’ (2011), John Burnside’s selected poems in German, ‘Versuch über das Licht’ (2011), and Jan Wagner’s ‘Self-portrait with a Swarm of Bees’ (2015). He lives in Wiesbaden, Germany, and teaches Poetry Translation at the University for Applied Arts in Vienna.

Editor’s note: ‘Erice’ originally appeared in 2004, and remains © Carl Hanser Verlag München 2004. The Missing Slate would like to thank Iain Galbraith and Raoul Schott for their kind permission to republish the poem here.

“They were as powerful as they were exotic, the ghosts/ of terror, His omniscience, the flapping of stained sheets/ just out of sight.” Weekend poem, by Holly Day.

Eryngoes Can Make You Go

"Only when their bones/ turn to dust do they begin to/ lose their trains of thought." Weekend poem, by R....