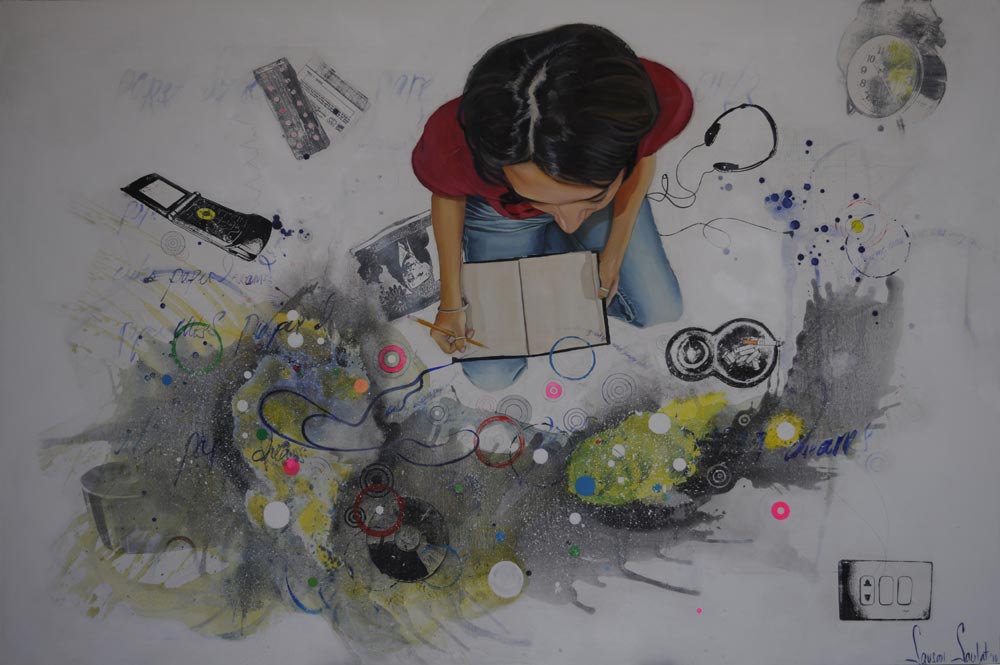 The weight of the wait, by Sausan Saulat. Courtesy: ArtChowk

Just when I’m sure there’s nothing going on
I step inside, letting the door blow closed.
Another bookshop: toys, coffee, and scones
And, somewhere, books, it might well be supposed,
And mags, authors smiling from their covers
At the register, chocolates, cards and gum
And guilty pleasures, moving back and forth
Between the browsers and the would-be lovers.
As Jarrell knew, our lives are heading north.

I walk around, circling the demi-gods
From previous lives, when syllables would sing
The passions of my youth: They now seem odd.
I hardly find a single blessed thing
I recognize, and so I genuflect in vain
And finally come to one: On Being Blue
And then, beside it, books on menopause
Then there’s a lovely travel guide to Spain.
I get the hint: my vocation’s a lost cause.

Yet here I am: there’s something lures me here
Although the slender volumes I once loved
Have both begun, and may yet, disappear.
I search below, beneath, and then above
There’s nothing much to do but pay and leave
Go home, watch TV. Nothing I hold dear’s
Among what I’ve perused upon these shelves.
There’s not much point in staying here to grieve:
I’ll rest my faith among the gods and elves.

Nowhere à la récherche du temps perdu.
How fortunate: I can at least escape
And leave. Or do the old soft shoe.
I look around. In the window, books on rape
And tattoos, cults, Chicken Soup for the Soul,
Crowd out the rest, short stories by Colette
Aren’t here, or sonnets by Edna Millay.
But look! — a book about the grassy knoll
From where, it’s said, they shot young JFK.

I’ve spent an hour in this dark domain.
The croissant was delicious, that’s for sure.
I bought a book on how to purge a stain:
Wise men have long observed that the impure
Is here on earth to keep the pure away.
And so I just move on. It starts to rain
As luck would have it, a green umbrella’s
For sale beside the games that children play
I should thank God: I’m a lucky fella.

At last, I find a way out of this mall
I’ve bought an ancient Diary of Anne Frank.
And on my phone, a loud, insistent call
Reminds me why I’ve turned into a crank.
I think I’ll stop en route, go buy some booze
Then I’ll be home, continue with my scrawls
Paper to pen, unconnected to the web
(These acts of mere resistance, what’s the use? —
There’s not much hope for one who’s no celeb.)

Strange, to think of ancient Homer tweeting,
Shakespeare on Facebook, nothing that consoles.
Offstage, I can hear the constant bleating
Of Orwell’s futuristic sheep. I have no role.
Like the afflicted lining up at Lourdes,
I’m left to contemplate the gods’ unseating,
Dream of salvation, succumb to dismay.
Like tulips floating in the icy fjords,
I need to find another god to whom to pray.

Michael C. Blumenthal is a poet and educator who has also ventured into essays, memoirs, and fiction. Blumenthal, trained as a lawyer, went into editing and then became a lecturer in poetry at Harvard University and ultimately director of the Creative Writing program there. Among his better-known verse collections are ‘Days We Would Rather Know’ and ‘Dusty Angel’. His eighth book of poems, ‘No Hurry: Poems 2000-2012’, was recently published by Etruscan Press.

“We swivel our heads around until a diamond cuts through the waves. A diamond made up of dusky dolphins with silver stripes on their chins.” Nicolette Loizou swims with dolphins in New Zealand.

"There were men everywhere telling people that disasters don’t just happen, especially during Ramzan. “You people believe this is geology....