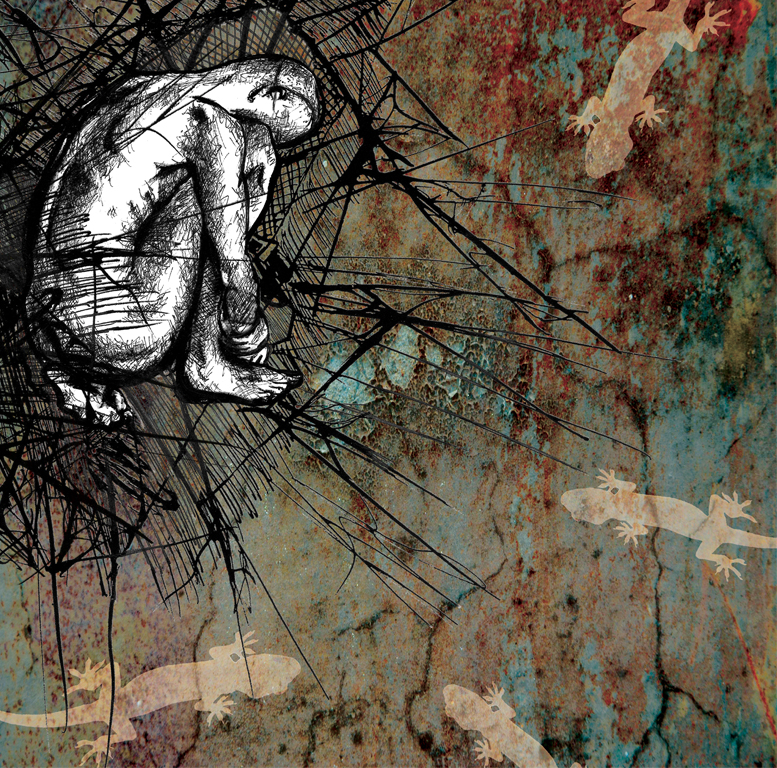 Cocooned by Mohsin Shafi. Image Courtesy of the Artist.

They knew me at the liquor store on the corner. My order was always sitting on the counter by the time I reached the front of the line. Five numbers, the same every week, on one ticket. It wasn’t much but at least it didn’t come in a bottle. It never occurred to me that my numbers would actually match the ones on the little ping pong balls on the television towards the end of the news, so when it finally happened, it took a minute for me to believe it.

Falling into a sinkhole, being struck by a meteor, stray bullets, cars running up onto sidewalks, all of it not only seemed possible, but probable.
Ever since Jacob’s mom died a couple years before, things had been tough. People say not to include finances when assessing your level of happiness but try telling a child that he has to wear his clothes until they disintegrate. See if he understands that being sad is a state of mind. He’s only seven but school is tough. It doesn’t take long before the other kids pounce on a weak classmate. And there was nothing that hurt me more than thinking about Jacob being pushed around just because his mother died in a car accident.

But the ticket in my hand nullified that worry. I was on the couch, Jacob had gone to bed, and I tried still my thoughts long enough to comprehend my new reality. People might think I would run into my son’s bedroom, shouting and hugging. Possibly saying something along the lines of, “All of our worries are gone!” But that wasn’t what happened. My heart kept its rapid pace but from fear, not excitement. I had proven to myself that even though the odds of winning are somewhere around one in two­-hundred million, it was possible to do it. Sure, we all know somewhere in the back of our mind that someone has to win, someone has to hit those tiny odds, but that’s usually an abstract concept like when we think of how much water is on the earth. There’s a lot. An unfathomable amount. But we don’t actually understand the full weight of the answer. And now, as I sat on my couch unable to move, I understood the odds. I understood that anybody could be the lucky one out of a billion and instead of feeling empowered, I was horrified.

Falling into a sinkhole, being struck by a meteor, stray bullets, cars running up onto sidewalks, all of it not only seemed possible, but probable. I figured my lucky streak didn’t only apply to positive outcomes. What’s stopping my luck from hitting the 1 to 280,000 odds of being struck by lightning?

I turned out the lights and TV and walked into my bedroom. I put the ticket into my desk drawer and pulled out my wife’s wedding ring. My brother had tried to convince me to bury her with it, that perhaps it would act as a means of closure, but I just couldn’t do it. I walked to the bed where I kneeled down and held the ring between by hands.

“You’re never going to believe what happened tonight,” I quietly mumbled. “Jacob’s schooling, his food and clothes, shit everything he could ever want has been paid for with a stupid lottery ticket. Remember how you told me they were a waste of time?” We used to have tiny arguments about the five dollars a week I’d spend on the lottery. She said it was a waste of money. I told her I was paying for the hope.

“What’s weird is, I should be dancing down the street but I don’t want to risk being hit by a car or mugged and shot or arrested or…” I let myself trail off because I knew how stupid it was. I kissed the ring and returned it to my desk drawer beside the winning ticket. The bed sheets were cool but it wouldn’t be long before my body heat warmed them up. I turned out the light.

My alarm went off at 6:30 the next morning but I wasn’t asleep. I wasn’t awarded the luxury. Instead, I listened to the sounds outside and imagined each possible disaster throughout the night. I silenced the alarm and pushed myself out of bed to make breakfast. I knocked on Jacob’s door as I passed it and walked into the kitchen to make some eggs. I flipped on the gas stove and stared at the flames. I saw explosions and burned flesh. Fire alarms rang in my ears over the screams of people trapped behind locked doors. Phantom smoke filled my nostrils. I turned off the heat and got out a couple of bowls for cereal.

We eventually made it out the door and into the car. I pulled out of the driveway and gasped when I saw the traffic at the end of the street. Cars zoomed by in both directions. The fact that it doesn’t take more than a slight turn of the wheel to create an orphan wrapped itself around my chest tighter than the seat belt. I slowly pulled into traffic.

Jacob turned his head and shrugged. “Isn’t it like something that helps us?”

“Yeah, yeah that’s the idea.” I wanted to tell him how it could apply to more than just lottery tickets and raffles but that seemed to be a little too much to lay on a kid on the way to second grade.

“What were you doing last night?”

“I heard you talking but I didn’t hear anybody talking back.”

“Oh that.” I scrambled for a lie. Mentioning his mom would only make him sulk for the rest of the day. I opted for redirection. “We, uh, we got some good luck last night, bud.”

“Yeah we did.” It had been a while since I could give him some good news. It helped me believe it was good, too, even though I knew it wasn’t. I was lying to myself and I knew it but it relieved the tension for a moment and I welcomed the reprieve. My answers were vague enough for him not to pursue it any further and a little while later, we arrived at the school.

“Alright bud, you be good.”

“Okay.” He leaned over and gave me a kiss on the cheek before hopping out of the car. I waited until he walked through the doors of the school before I pulled away from the curb. Jacob will be safe in there. Won’t he? Yes, of course he will.

Going to work wasn’t an option. I drove home with both hands on the wheel and my eyes firmly focused on the road until I was able to park and turn off my car. I went inside, locked the door behind myself, and walked into the bedroom. I opened the dresser drawer and took out the lottery ticket to check the numbers. I did a quick internet search and sighed. There was no avoiding it: I was lucky.

A Poem I Cannot Write

Flora de Falbe starts our 'Poets on Poets' series by reflecting on sexism and censorship in organised religion.