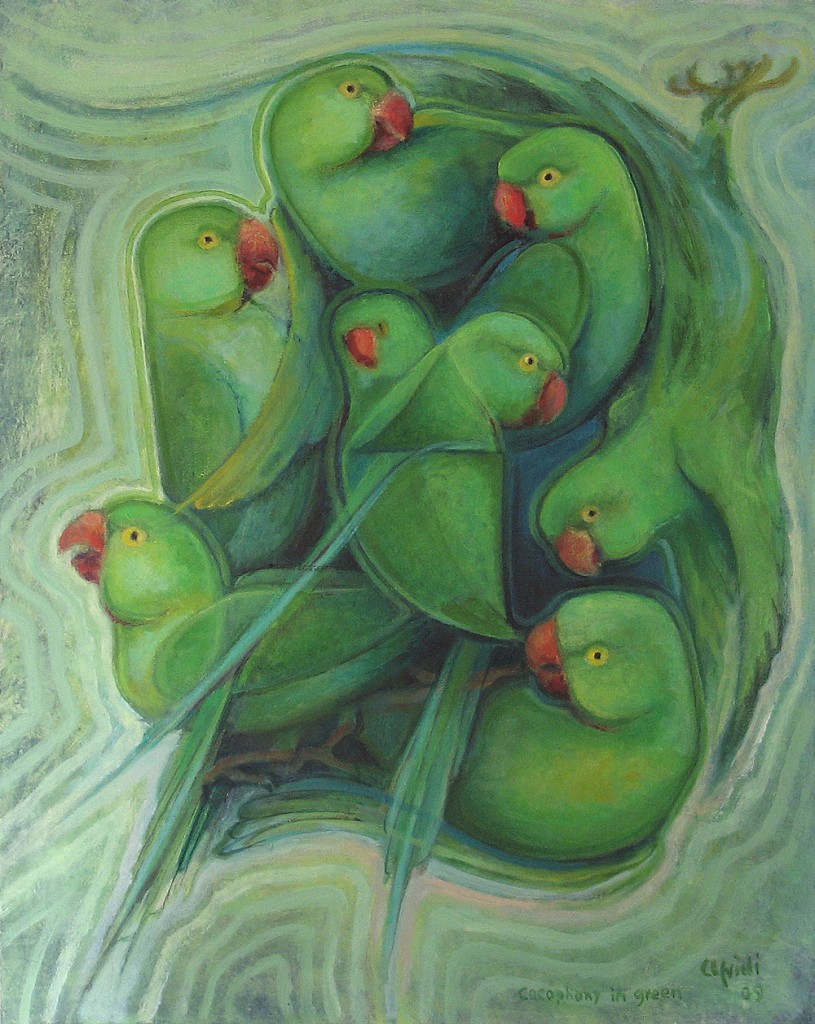 You could hear him coming. Not him, but his birds. So distant, so faint, they seemed at first to be calling from somewhere inside her head. She stopped and listened. Birds, she thought. Another vendedor.

Ana Laura knew what it was to work for a living.

Alone of her family she had attended university. She had taken a degree in law, but the only work she could find was teaching at la preparatoria in Pueblo Nuevo, preparing students to attend the same university and take the same degree she had. Or another, equally useful.

Ana Laura’s salary had been counted in pesos an hour.

Eventually she had found a job in Tamazula. It wasn’t work for a lawyer, but her training didn’t hurt. It was with an agency whose task it was to enforce environmental law. As such it had to stand up to the sugar company that darkened the skies over Tamazula and filled the lungs of everyone who lived there. The agency did manage to impose some fines, but they were inconsequential. The sugar company paid them and continued to darken the skies.

Her job in Tamazula was supposedly apolitical, but it transpired that the work was party-related. All the jobs in her office were dependent upon an affiliation with the PAN. When the PRI returned to power, someone else was tasked with imposing the fines which the sugar company would doubtless continue to pay and she and her colleagues had to find something else.

Ana Laura returned to Pueblo Nuevo. For a while she cared for her mother, which gave her a roof over her head. Months and, in time, years succeeded. Then her mother, who required constant care, died and Ana Laura got her old job back at la prepa. The salary had improved. Slightly. This time she knew she had better get used to the idea: more than likely, the job was forever.

The bird man carried four kinds in stacked cages, largest and loudest on top. Each had been chosen, it seemed, less for the sweetness of his voice than the distance of his cries.

Ana Laura had heard the chorus a block away. Her first thought was an especie migratoria, a flock on its way somewhere, had paused to rest on the roofs of Pueblo Nuevo. When she opened her door and looked out through the grillwork, it was the young man she saw, the bird man looking back at her.

Ana Laura stood and listened a moment. The birds made no effort to serenade her, nor he to sell them, though he had come to a stop at the sound of her door.

El vendedor de pájaros did not look like an itinerant. A bag of woven grass hung from his shoulders. His huaraches were worn but his feet did not suggest years on the roads and backroads of Jalisco. His cages looked small and uncomfortable. Crowded. Several species were represented. Suddenly the bird man was talking. His voice was less penetrating than the loudspeaker on the fruit and vegetable truck or, worst of all, the van of the man from another town who sold bolillos. It was soft, almost musical and, once he started, it seemed he would never stop…

Here on top you see the lark bunting, el llanero alipálido, who flies like a butterfly; next to him the flycatcher, el mosquerito de charral, who takes his prey in mid-air; here, underneath, is pyrrhuloxia, el cardenal desertico; here is the scrub jay, el chara azuleja, who gangs up on marauding hawks and himself robs nests; here is phairopepla, el capulinero negro, who feeds on mistletoe and, in distress, imitates the cries of at least a dozen other birds; down here is the song sparrow, el gorrión cantor, who sings 300 times an hour–he will sing to you–and last but not least, here on the very bottom, the white crowned sparrow, el zacatero mixto, the male who learns the song, not of his father, but of one barrio or another or, if he lives between poblaciones, learns the language of both and can sing in either, the world’s only bilingual bird.

Listen. That is the song sparrow. Female song sparrows are attracted to males with the most complex songs. But all my birds, señora, without exception, are songbirds, pájaros cantores, and you can have one very reasonably, muy barato, a bajo precio.

Her eyes wide at such fluency, Ana Laura unlocked her grillwork, stepped out and asked the price of one of the birds crammed on top. It was the same, the bird man said, as any other. And named the price. It was not that much, not much more than a sombrero from the man who walked the streets with two dozen on his head, all different sizes, all for sale.

Ana Laura didn’t have a cage and she wasn’t sure she wanted to hear such determined singing all day.

Suddenly the clamor was bothersome. She stepped away from the desperate chorus, half circling man and birds in the flattened sunlight of the street. A dozen small heads followed her. The song intensified. At a distance she thought she could see the misery in the small round eyes. They’d seen others of their kind chosen, taken away. Wherever, it couldn’t be worse than where they were. Having never had a chance to learn another, they sang the song they knew.

They sang of release, of liberation.

The bird man also turned to look at her. His look was not without hope. Expectation. At the least, he expected Ana Laura to ask a question. And she did.

Have you always sold birds?

The young man laughed, then answered.

I haven’t had time to find anything else.

Why do you have to find anything?

Everyone has to find something, señora. One man wheels his whetstone and sharpens knives; another carries his wife’s tamales, still hot; another shoes or remedios in tiny bottles; another carries bagre from the lake, stuffed with mercury. Yet another carries chairs he made up one street and tables he made down the other. I carry birds. Which one do you like?

Poet of the Month: Esther Phillips

"I love to work with language that forces me to choose the most powerful way to express what I feel...