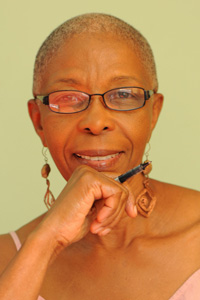 ‘To read Esther Phillips,’ says the St. Lucian poet John Robert Lee, ‘is to meet [an] accomplished representative of those who have lived in the Caribbean all their lives and were among the first to be described as the Post-Independence generation… writing back to the empire from the provinces, as it were.’ Esther Phillips’ international reputation continues to grow: she represented Barbados in both the 2012 Poetry Parnassus and the BBC’s 2014 Poetry Postcards series.

In our February Poet of the Month interview, she tells Jamie Osborn what lies behind her work, why a poet can’t help but feel the “burden of sensitivity”, and how the arts seem to be changing in the 21st-century (“…one has to make way for that kind of immediacy and urgency that the younger generation feels in its need for self-expression; the page for them is an impediment”).

Your poetry, to me, speaks of potential, of openings and imagination. ‘Canvas’ ends with the children standing, “not on a bare / dirt-floor, but tiptoe at the rim of the world”. But there also seems to be an awareness of restriction or of threat: ‘Feathers’ has an old woman dreaming of flight as she sits in an old people’s home, while the wolf of ‘Night Errant’ “rips the night open”. Is that something you are conscious of in your writing?  Is it a fair understanding of your poems?

I think that the “openings” to which you refer make way for several layers of feeling or awareness. The finished poem may just be a selection (with which one may struggle) to find what seems to be the major poem wanting to emerge. In other words, a poem may have other poems compressed within it.

Your use of the word “threat” seems rather strong. But I admit that the idea is implicit in my poem ‘Contraries 11’ (in ‘The Stone Gatherer’): “… underneath she feels the snarl/the mix-up/the uncertain justice/the darkness/none can apprehend/that ever lurks/to drive the poet’s pen.” I believe that the poet can’t help but be aware of undercurrents of feeling or experience, whether her own or that of others; what one may call the “burden of sensitivity.” In my poem ‘Seer’, for example, the child is born with a caul over her face. She is therefore at once privileged to “see” beyond the material world. At the same time, however, she is burdened by that awareness out of which she may feel compelled to speak, thereby creating disturbance for others. Generally, though, I think my work reflects, like that of others, the angst, the existentialist feeling, the dis-ease that is a part of the human experience; at the very least, the “still sad music” Wordsworth records.

I think my work reflects, like that of others, the angst, the existentialist feeling, the dis-ease that is a part of the human experience…
Maybe related to that question of potential, I’m interested in how you use line-breaks in your poems. Often the line-breaks take me by surprise, but not because they are dramatic or call attention to themselves. They break the movement of otherwise comparatively simple sentences, but they do so entirely naturally: “how one / should hold them lightly”, “We could find with / our eyes shut”. How do you place your line-breaks?

My line-breaks, I believe, have something to do with how I’m hearing the rhythm of the poem in my head. I always hear the music of the poem before the words come. I’ve looked back at a few poems on considering your question, and realise that often I break the line deliberately on a word/image that I’d particularly like to stress. But the break does not interfere with the overall run-on metre that is largely iambic; the most natural of all meters; that of the heart and pulse. The idea is that the rhythm, breaks and all, should flow “entirely naturally.”

How do you think you respond to or use the visual in your writing? I’m struck by those lines in ‘Night Errant’: “the night you had so drawn / with soft colors”. As in your other poems, there seems to be an evocation of a visual detail without definitively filling in that detail, allowing it to remain soft. Are you inspired by visual art?

I like visual art but that is not my source of inspiration. I am eternally grateful to one of my professors in the MFA programme who discouraged the use of abstractions. His idea was that such poetry may sound good but the eye sees nothing. That guidance helped because I tend to think in images, anyhow. I’m also influenced by T.S Eliot’s concept of the “objective correlative” as I understand it: for every feeling or emotion, there is some image or metaphor drawn from the objective, material world which one may use to express or convey that feeling or experience. I also appreciate that poetry is the most economical of the literary genres in its use of language. I love to work with language that forces me to choose the most powerful way to express what I feel in the fewest words. That way, the images, charged as they are, may produce the most powerful impact thus creating a lasting impression. That, in my view, should be the aim of poetry.

You edit “Bim: Arts for the 21st Century”, a journal of Caribbean writing that revives the highly influential “Bim” magazine, first published in 1942. What would you say is important for the arts in the 21st-century?

This question is as complex as is the effort to figure out what on earth is happening in this 21st-century with its constant and explosive changes. Anyway, I suppose that the general expectation of art is that it expresses the feelings of the artist but also reflects the ‘truth’ or ‘reality’ of the society that produces the artist. One such example re: poetry is the “spoken word” genre that is gaining increasing popularity, especially with the young. I suppose one has to make way for that kind of immediacy and urgency that the younger generation feels in its need for self-expression; the page for them is an impediment. I wonder, though, if some element of discipline is not lost: the need to think harder and more clearly, the chance for reflection, the effort to master techniques that communicate effectively to the reader who is not immediately in front of you and whom you are therefore not able to sway by voice and gesture…I also think that technology is bringing about some brain changes and maybe even changes in the visual and aural perceptions and processes… Perhaps, in the final analysis, there is room for us all.

I love to work with language that forces me to choose the most powerful way to express what I feel in the fewest words…
I find myself wanting to know more about the people in your poems. Without wanting to be reductive, could you say a little about who they are? And (maybe this is part of the same question), who do you think of yourself as writing for?

I believe I write for everybody, generally speaking. Some of my poems, however, are understandably Caribbean and very much set in that context. For example, ‘Seer’, ‘Violet’, ‘A Kind Covering’ are very much Caribbean poems, so to speak. The grandmother-figure is prevalent in the Caribbean setting very often because of the history of migration. Children were often left in the care of the grandmother when parents migrated in order to make a better life for their families. This is the situation relative to ‘Mask’ and ‘Legacy’. On the other hand, there are some poems with a particular central figure in mind: ‘Night Errant’ being one such. That collection, however, will be published later this year by Peepal Tree Press. Generally speaking, though, I write in order to express what I feel or observe. Those feelings and observations may relate to anyone, anywhere. Across races and cultures, we share many similar experiences of love, loss, relationships or just the everyday surprises of life… It’s a human thing. In the end, I’ll say I hope to write for all lovers of poetry.

“Then the thunderclap came and she never wondered about anything ever again.” Story of the Week (November 4), by Brian Koukol.

"the things I long for are edited out of movies. maybe / they just exist, even less than perfection, like...