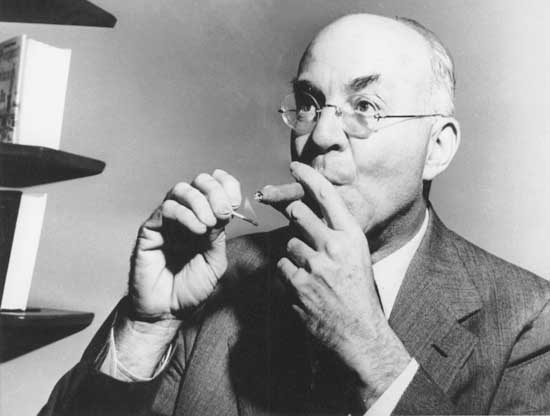 Parlor snakes and flappers joggle hugging downtown uptown, hug joggling gray square after gray square, until they see the new moon giggling over Weehawken and feel the gusty wind of a dead Sunday blowing dust in their faces, dust of a tipsy twilight.

This excerpt from John Dos Passos’s novel ‘Manhattan Transfer’ reads more like poetry than prose. His descriptive, vibrant writing throbs with the life of its historical moment. Though many readers today may not be as familiar with the work of Dos Passos as they are with that of his contemporaries such as Ernest Hemingway, F. Scott Fitzgerald, or William Faulkner, his early novels paint a vivid modernist portrait of the World War I era in New York that still remains poignant a century later. His near journalistic perspective of his own generation creates this cohesive yet fragmented picture of 1915.

Dos Passos was born in Chicago at the end of the nineteenth-century and graduated from Harvard with honors in 1917. Almost immediately after graduating, he went to the frontlines in Europe where he worked as an ambulance driver, an occupation that made him a witness to the casualties of World War I.  During his time in Europe, especially in France and Spain, he befriended many writers of the Lost Generation, including Hemingway, Stein, and Faulkner.  His work as an artist and painter has also influenced his written work, which was characterized by a collage style. He was a prolific author, publishing 42 novels over the course of his lifetime.

‘Manhattan Transfer’ (1925) and, in particular, ‘The 42nd Parallel’ (1930) focus on the city of New York 100 years ago through this type of narrative collage. Employing a modernist technique that is characterized by a patchwork of fictional vignettes and clippings from newspapers of the day, Dos Passos depicts the American in all his forms and guises.  This man or woman is often lonely, hungry, or drunk, though always striving for more. The chapters often take the name of the character they focus on, and it is only towards the end of the novels that the reader discovers the distant connections between individuals. This interconnectedness lends to a sense of constant activity or change.  The heroes are always in a moment of transition: from one job to the next or from one ideology to a newer one, and the crisscrossing of their different attempts at happiness provides momentum to stories that might otherwise seem meandering.

Indeed, the symbolic role of transportation is featured heavily in both novels.  Even the titles of the books themselves highlight motion and geography. Many episodes in both books are chance encounters, or fragmented bits of conversation between people as they get in or out of taxicabs.  This insistence on the bustling nature of life in a modern city helps create the frenetic atmosphere that pervades these fictions. In these books, the characters may constantly be travelling uptown or downtown, running late for tea or bumming change for coffee, but there is little sense of arrival.  Even the characters that are successful in their pursuits — such as the mogul J. Ward Moorehouse in ‘the 42nd Parallel’ — are not depicted in any glorifying way.  Life goes on as it had before in the novel, and neither success nor failure is final.

[pullquote]If a Dos Passos hero walks the streets of Manhattan at 4am, looking for connection with anyone who will engage with him, the woman who looks at Facebook photos of near-strangers is perhaps his bleak counterpart.[/pullquote]The collage style of writing mimics this fractured nature of the novels’ subject matter. Its origins can be understood not only through this documentarian approach to fiction writing but also through the historical context of World War I. Radical changes in literary styles are often a reflection of a larger political reality. Dos Passos’s variable, even violent, style of writing can be seen as a reaction to a moment in history when civilization suffered such trauma, such a rupture from the past that the old ways of expression no longer sufficed. Though the recollection of this war has faded for most people today, its devastation was unlike anything any modern nation has seen.  The death toll is estimated to have been as high as 16 million and the number of wounded around 20 million.

The collective memory of this war, given the number of wounded and shell-shocked men that came home, was one of dismemberment. Considering the wide use of new warfare technology such as tanks and machine guns, the soldiers who survived often returned with amputated limbs or signs of deep psychological trauma. Dos Passos’s work as an ambulance driver on the front meant that he witnessed a great deal of this carnage firsthand.  In a diary entry he wrote:

“The grey crooked fingers of the dead, the dark look of dirty mangled bodies, their groans and joltings in the ambulances, the vast tom-tom of guns, the ripping tear shells make when they explode… and through everything the vast despair of unavoidable death of lives wrenched out of the channels.”

This passage highlights the violent nature of the moment in which he lived. One can speak of a collective loss in the case of what was once called the Great War, as it touched nearly all Western nations in a deeply personal way. Though many of the narratives in these books never explicitly reference the War, this fractured style certainly expresses the sense of chaos and dismemberment that pervaded the era.

Even in his portraits of civilians in New York who have seemingly nothing to do with the violence of war, this theme of dismemberment suffuses both the style and content.  Not only the divisive nature of the chapters but the wounded aspect of humanity depicted in these novels reveals this attempt to reason with chaos.  Though perhaps the sentiment of a collective or national loss is no longer prevalent today, this desire to reason with the irrational, to unite the seemingly disparate populations of a sprawling city, remains pertinent.

The legacy of Dos Passos’s vision of modern New York can still be seen in the way urban people of all kinds interact and communicate through technology.  Though it is far different from literary modernism, there is a way in which social media and other technological developments are modernist in character. Whether Facebook, Instagram, or Twitter, images and words are now constantly published and republished without any context.  Memories are dismembered on Twitter feeds and incongruous stories, from a celebrity tweet about a chic restaurant to a friend’s announcement of a new job, run side by side.

Like depiction of the intersecting lives of New Yorkers in ‘The 42nd Parallel’, these technologies create a web of entanglement that is alternately reassuring and superficial. What does it change for the reader to realize that one character is in fact the brother-in-law of another character’s secretary? Being able to refresh a feed, to intersperse the news of the day with the mundane events of everyday life produces a similar juxtaposition that Dos Passos’s newsreel style of writing does. There is a way that these technologies and the communities they produce create a similar sense of isolation within the crowd.

If a Dos Passos hero walks the streets of Manhattan at 4am, looking for connection with anyone who will engage with him, the woman who looks at Facebook photos of near-strangers is perhaps his bleak counterpart. Though certainly a difference exists between seeking kinship amongst strangers in the street versus online, the motivating urge remains the same. One hundred years and another world war later, this vision of what it means to look for meaning in a modern city remains strikingly parallel and alternately despairing and hopeful.

Jess McHugh is a contributing editor to the Articles section.

"In this world what we have/ Keep us wide awake all night..." Weekend poem, by DeWitt Clinton, adapted from Tu...