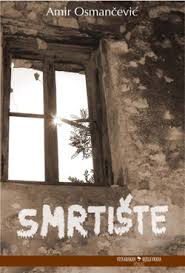 ‘Death Place’ is a thought-provoking story about the Bosnian War (1992-1995), written from an atypical perspective for this subject matter. The story revolves around Mehmed, a disillusioned Bosnian Muslim, who has been raised to believe in Yugoslav ideals and his Yugoslav identity. At the beginning of the war, Mehmed decides to fight in the Yugoslav army, against the secession of Slovenia and Croatia. However, as the war progresses, Mehmed realises that he is fighting for the idea of Greater Serbia and against his own people. Mehmed deserts the army and goes back to his city of Banja Luka, now inhabited mostly by Serbs from nearby villages. Most of his friends and family have left the city, including his wife and son, so Mehmed finds himself in an unnerving agony of loneliness and fear.

Exposed to persecution from the Serbs for being a Muslim, and shunned by his own community for having been in the Serbian army, Mehmed is a repentant pariah in the times when he needs other human beings the most. Besides being alienated from others and from the unreasonable events of the war, at times Mehmed appears alienated from himself. Following Mehmed’s war experience throughout the book, the reader experiences the full absurdity of the Bosnian conflict, and how it affected regular people from any nationality.

With ‘Death Place’, Osmančević gives a voice to those who have been shunned by everyone else: soldiers who fought on the ‘wrong’ side, labelled as traitors by their nation, and never fully accepted in the circles of those they fought against. Even at the very beginning, when Mehmed declares himself as a Yugoslav to his army buddies, his less idealistic superiors tell him “Don’t fool yourself, Mehmed: you’re Muslim, but you’re our Muslim.”

The book parades a multitude of colourful characters who all seem to have ended up in the war by mistake — all likeable for their own idiosyncrasies. There is Zoran, a Croat fighting in the Serbian army because his father was a colonel; his mixed-ethnicity girlfriend Stela; Italian Marcel who is looking for his journalist brother; Saša, a young Serbian soldier who cannot stand the cruelty of the war and thus crucifies himself, imagining that he’s Jesus… There are also the people we can expect to find skulking in the shadows of any war: cruel soldiers, opportunists, and war profiteers.

‘Death Place’, with its admirable authenticity, has plenty to teach readers previously unfamiliar with the details of the Bosnian war. It gives an insight into people’s motives for fighting in the war (one Serbian soldier mentions revenge for Croatian crimes against Serbs in World War II), explains Bosnia’s changed demographics after the war, and serves as a reminder that in any war, those who suffer the most are regular people, who have been placed against each other on someone else’s orders.

[pullquote]‘Death Place’ is a poignant testimony of wasted human lives and the disrupted social structures war leaves behind.[/pullquote]The style of ‘Death Place’ is simple, and the language colloquial. The author lets the protagonist speak in his own language, his own dialect. The protagonist talks about specific places and events and provides a tremendous amount of detail. Osmančević often complements Mehmed’s testimony with footnotes in which he further explains some events of the book — in many cases events that even Mehmed, caught in the immediacy of the situation, did not know of or notice at the time. He also details some of his discussions with Mehmed, which occurred in the process of interviewing the former soldier. The reason Osmančević can do this is that he, like Mehmed, is a native of Banja Luka, and his notes further enrich ‘Death Place’. This book provides an insider’s account of fighting in the Serbian army, and the emotional turmoil experienced by a man accidentally caught on the wrong side of the conflict.

The author uses humour as a very effective break from depressing and emotionally exhausting descriptions of the war. However, at times, humour is used to further highlight the absurdity of war. For example, Mehmed describes an episode in which he, together with other Bosnian Muslims, and a disobedient Serb, Savo, is brought to be a slave in a Serbian work camp, at the front line. The camp is just a few metres from the Muslim border, defended by the Muslim soldiers. They are so close that the soldiers often talk to each other. Savo, a Serbian, gets into an amusing verbal duel with a Muslim soldier. Their shenanigans entertain both sides: Serbian and Bosnian, so they all laugh together. Savo and his friend, whom he names ‘Turkuša’ (Turk), even arrange to play a secret soccer match in the moonlight. Two people from the opposite sides, in the middle of the war, end up playing a soccer match in the middle of battlefield. However, this moment is directly juxtaposed with the next scene, which reminds the reader of the harsh reality of the war: Serbian soldiers discover the two and shoot them dead.

Osmančević’s ‘Death Place’ is a captivating war biography which dissects the complex topic of the war in the former Yugoslavia into people’s destinies. It is also a poignant testimony of wasted human lives and the disrupted social structures war leaves behind. But, most of all, it is a human story, told from the perspective of a person who knows there’s nothing else to lose. And that it was all in vain.

At a time where everyone seems to be on social media decrying the latest controversy or terrorist attack, Emily Eagen explores whether online activism can really make a difference.

"When it got unbearable I went to the mountains to look for drama." Story of the Week (September 4), by...