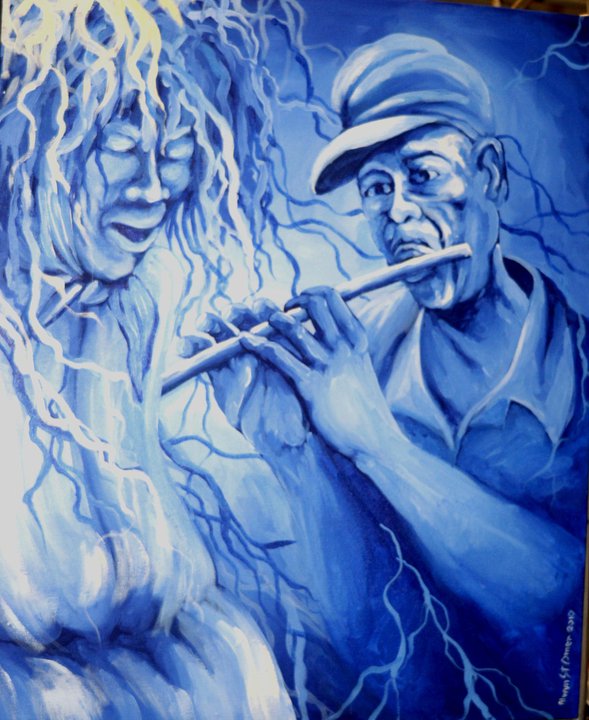 The Flutist, by Alwyn St. Omer. Image courtesy of the artist

I
We did not know
That power does not grow
From the barrel of a clenched fist;
That blackfisted rage
Does not uproot the stripes of the splayed whip
Sunk deep
In the riven flesh of the cracked earth

Nothing devastates more completely
Than when the greening earth of another vision
Crusts inexplicably,
So that we doubt that the vision
Was indeed a vision — not a dream
Blasted unredeemable by the bombs, an invasion
An intervention (call it what you like
It’s the same blasted thing!)
No, nothing devastates so completely
As when those who embody this vision
Entomb it,
As when cardboard philosophers
Obscure the eyes of their own vision…

Now, no longer do we seek
To rise across archipelagic peaks
Of small islands;
To stun white suns
Fists raised in an epochal rage

No longer are the years of our youth
A passion of faiths and fires
Felling
Root and branch
Generations of unwitting sins,
Scorching the ground with the naïve didacticism
Of doctrines that seek to seed the earth
And burst upward to a new greening!

George Goddard was born in Saint Lucia in 1951, and is an industrial relations practitioner and trade unionist.  He holds an MBA from the Cave Hill School of Business, University of the West Indies. His first published poem appeared in the Caribbean literary magazine Link (1970). Since then his work has appeared in the public domain quite sporadically. He is putting together his first collection for publication.

“the sea of motor cars floods these city streets/ as though to stop for a second would halt its tides forever…” Poem of the Week (March 24), by Afshan Sajjad. Translated from Urdu by Jim Carruth.

"...a collection of things etc that could but won’t express themselves, including: a tiny tin bell without a clapper; a...