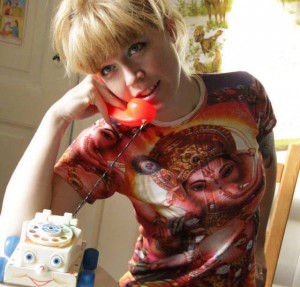 Ambika Thompson is a parent, musician, and writer living in Berlin. She has contributed short stories to NPR Berlin, Fanzine, and Literally Stories, and has had her stories shortlisted for the Reader Short Story 2012, and the Fresher Writer Prize 2015 contests. She is also one half of the cello riot grrl band Razor Cunts. In the latest installment of our Author of the Month series, she talks to Casey Harding about the problem with American politics, the difficulty of facing reality, and how much fun it is to take the piss out of Putin.

Looking through your website and your various other outlets, it is amazing to me how much work you produce in so many various art forms. How do those various forms impact each other, if at all?

I’m what I like to describe as a jerk of all trades. I like to do a lot of things and none of them particularly well. I don’t really do photography that much anymore, since my analogue camera broke. All the photos on my website predate my fiction writing days. This is gonna be a bit dull, but writing short stories and doing music, for example, don’t really work together in my head. I think I have them very divided. I probably have general themes going on in my head at any given time. For example, Putin has shown up in a lot of my stories and at least one song. I really like taking the piss out of him. He’s like a really evil Popeye.

Do you find yourself taking a photograph or writing a song only to find that the idea works well as a story, or vice versa?

Not really. Again I tend to get obsessed with themes, so if I’m working on a song and a story simultaneously there tends to be some overlap.

Last question on this, are there certain ideas that you think work better for different mediums? Do you find yourself using different mediums to express different, specific emotions (music used more for happiness, photography for sadness, etc, etc)?

I don’t really have emotions. I do different things for different buzzes. Music is something more hands-on. Writing is more cerebral. Photography because I like looking at pretty things.

‘Putin’s Soul’ is a hilarious, dream-like romp. Where did this story come from? Feel free not to answer this if there isn’t an interesting answer, but how did you choose the heads of state that were in the vending machine?

I wrote the story when I was forcing myself to write a short story everyday, and at the time I was reading a lot of Etgar Keret. It was partly inspired by his story ‘Hole in the Wall’ about (well, surprise) a hole in the wall where there used to be an ATM, and if you screamed into it a wish would come true. I’m also really obsessed by things that one can buy in vending machines, like books, mashed potatoes, gold, marijuana, caviar, lettuce, burgers, canned bread (this sounds amazing!), underwear (used and/or new), eggs, rice, neckties, art, and what I’ve now found I’ve always needed, live crabs.

I don’t remember why I chose Putin as the one I bought, other than my unhealthy obsession with his macho, beef-cake type persona. I’m not one to adhere to dichotomies like good and evil, but if I had to, then I’d label him evil. I also suspect that he’s actually a robot from outer-space. You ever notice how his face doesn’t seem to have any expressions?

As for the others, I wrote that piece in the spring shortly after Netanyahu was re-elected. This is an immense disappointment for a lot of people, and it does not seem plausible that a solution to the Israeli-Palestinian conflict can be reached under his leadership, which means the fighting will continue, thus creating another, unnecessary act, in this already far-too-long ongoing tragedy.

As I’m Canadian I have a soft spot— aka raging ball of hatred — for Stephen Harper. As leader of the Conservative Party of Canada, who has been in power for the past nine years, he’s made Canada a bit of a joke — well, him and Rob Ford. Harper’s policies, in terms of immigration, refugees and general social services are disgraceful. Since he’s been in power he’s made it harder to get Canadian citizenship and easier to lose it, and refugee acceptance has gone down 30%. Seriously, it’s the second largest country in the world, you can fit everybody in there, and still have room in every citizen’s backyard for a massive jacuzzi party, and a pet elephant! There’s also that whole thing with the oil sands and you know, just kind of destroying the environment.

Obama was the last I added to the list. I don’t really believe that Obama is inherently “evil” or “bad” but I think that you have to be bonkers to go into American (probably most) politics, and that you inevitably have to sell your soul. In the U.S. it’s practically impossible to get anything useful done, between the yankee-doodle Republicans, centrist-Democrats, lobby groups, and the power that big corporations have in that country. The Obama administration did get some amazing stuff accomplished, regardless of a lot of opposition, but a lot of shitty stuff happened too. The whole American political system just seems like one big stark raving mad joke, in dire need of a massive overhaul.

Reading through some of your other stories, they all have a similar, Kafka-absurd approach to the world. Does this help you depict the problems that you see in society? Is this choice of style a response to the world or is it, rather, something that fit the themes of your stories and grew out of them.

It definitely helps me depict the problems I see in society. I’m one of those people that can’t really deal with reality. Reading the news makes me want to gouge my eyeballs out with a teaspoon. There’s this toxic mixture of the horrible things happening in the world, and the way the media sensationalizes it, which is deplorable. I need to try and laugh about some of it.

I’m also, quite simply, a big fan of the surreal, absurd, and satirical. I studied Czech literature and film in university, and focused primarily on the Prague Spring, so the 1960’s when communism was starting to loosen its necktie (which predates the necktie vending machines) in Czechoslovakia. This was a big inspiration for me. The writer’s and filmmakers of the time, like Vacláv Havel, Milan Kundera, Jiří Trnka, Miloš Forman, Věra Chytilová and Bohumil Hrabal, to name but a few, used satire, surrealism and absurdity in their works to make thinly veiled social commentary, specifically in regards to the totalitarianism of the Communist regime, in a climate where you’re work could still very well be easily censored.

Clearly, as a Canadian writer living in Berlin in the 20-teens, I don’t face these restrictions. But I do feel that using absurdity, humour, and satire are still easier routes to take when criticizing the state of the world, at least for me.

Do you have anything in the works? Any shout-out you would like to put in?

I’m just finishing up some short stories before I devote (almost) all of my attention on writing my first novel. We’ve also started an online literary journal called Leopardskin & Limes which will be officially launching at the beginning of October, and it’s gonna be a cornucopia of weird and wonderful stories and poetry.

I recommend reading Jane Flett‘s stories and poetry. She’s my bandmate and also the poetry editor of Leopardskin & Limes. Also check out The Reader Berlin, which is the wonderful writer Victoria Gosling’s website for bringing English-speaking writers together in Berlin through events and writer’s workshops. She’s done a lot for the English writing community in Berlin!

I’m also a tremendous fan of Constanzas Macras’ Dorkypark dance company, which is so much more than just dance. Everything I’ve seen of them has been amazing, and truly inspirational. They perform a lot around the world, so if you ever get the chance, I highly recommend it.

"Despite the controversy surrounding the theory and those who wished to study it, it was not an entirely new concept....