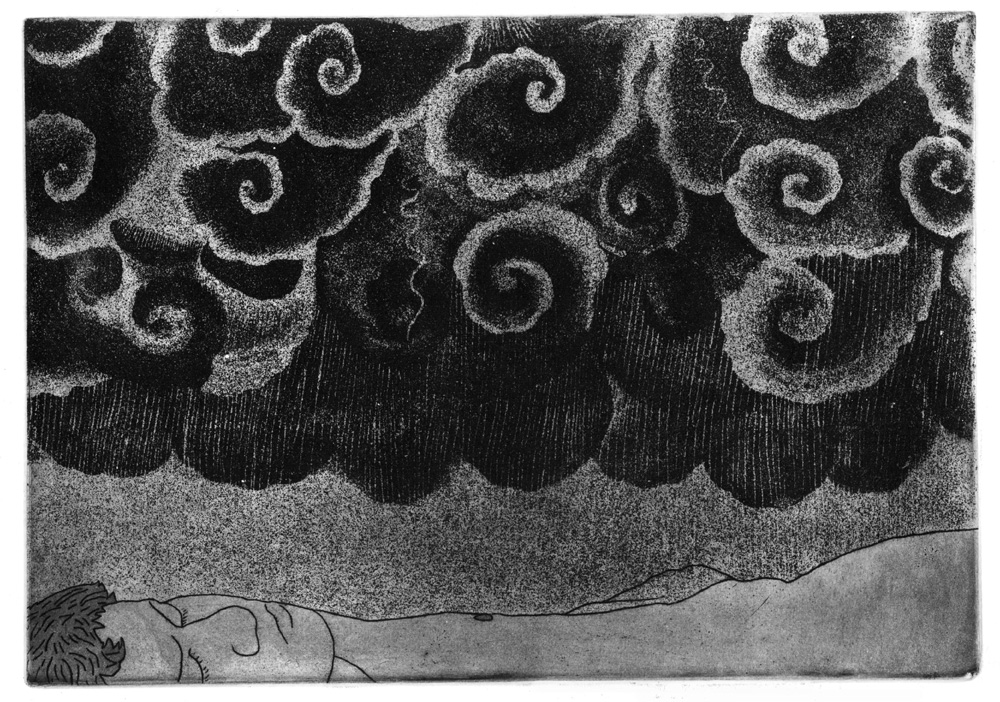 Pulling up to the house, it was still the pine green of Agustin’s childhood. The zaguán, a large set of doors leading to the driveway, remained steel blue with chips in the paint on the door handles. The courtyard still had bird cages up against one of the windows. In addition to parakeets, María and Carlos, his parents, had adopted a stray mutt and two black cats. The stray dog had gray fur that had once been white. Around her eyes, dried tears had matted the fur.

Carved in the concrete, near newly planted flowers, were the names of María’s grandchildren: Mónica, Jesús, and Montserrat. The latter were his nephew and niece. Mónica was Agustin’s only daughter.

Car parked, Agustin took down the luggage from the trunk with the help of his father.

Stowing away the luggage in the guest room, María ushered Agustin into the kitchen.

“¿Tienes hambre?” María asked. Without waiting for a response she ordered him to sit down as she unpacked a plastic bag. Wrapped in brown butcher paper were fresh corn tortillas. In separate small plastic containers there was green and red salsa, diced onion, and cilantro.

Lastly, a larger container contained spit-grilled meat. Together they made Agustin’s favorite dish: tacos al pastor. His mouth watered. His mother never used paper plates so she set three porcelain white dinner plates on the placemats. Paper plates were as nonsensical to her as instant noodles. Carlos joined them at the table and the three of them made themselves tacos. Agustin quickly lost track of how many tacos he had eaten. Stuffed, he still ate one more. His glass of Coca-Cola was largely untouched.

Leaned back in her chair, María took the opportunity to ask Agustin if he thought the divorce was final.

When it rained in Juarez, it brought no memories of his childhood. It brought no relief from the sun and instead made the city feel like a kiln.

Ciudad Juarez was not Agustin’s first stop when he had left the warm embrace of Tlaxcala. It was a border town near El Paso, Texas. A transgendered woman nicknamed “La Guera” had become his landlord when he moved from Tijuana. The roof leaked and on one occasion, he swore he spotted a big bellied rat. His bed sheets were supposed to be the stark white of hospital walls but instead the washing machine had made them the gray of his father’s hair.

Growing up in Tlaxcala, Agustin was no stranger to rain. In the summer, rainstorms happened at least once a week. The neighbors had laminate roofing over the pen where they kept their sheep and goats. The heavy raindrops slapped the laminate roof and could be heard from the small kitchen. When it rained in Juarez, it brought no memories of his childhood. It brought no relief from the sun and instead made the city feel like a kiln.

He had luck in finding a job as a parking attendant. On the street Avenida Juarez, there was an estacionamiento. The building was painted a sunflower yellow. Corners of the building had begun to crumble like a marriage under financial strain. At most the lot had eighty spaces. As vehicles entered, they were given a ticket stamped with the time of arrival. Upon departure, the driver paid a small fee to the attendant. When Agustin was hired, the owner, Anastacio, proudly proclaimed, “You would make a great husband for my daughter, Blanca.”

On that same street there was the Noa Noa Bar and a little farther was a casa de cambio where the gringos exchanged their dollars for pesos. On Friday nights, he frequented a nightclub called Sarawak where the bartender, Alfredo, offered him his favorite brand of whisky, Johnnie Walker, at no charge.

It was at Sarawak where he met his future bride, Refugia. Alfredo had offered the information that she was from el otro lado, El Paso. She had insisted that she too could handle whiskey. While Agustin had seen her frequent the nightclub almost as often as he and also had witnessed her drink far more beers than her companions, he was not entirely convinced. Regardless, he challenged her. Refugia had managed to drink as much as him, but her walk was reminiscent of a newborn goat getting a feel for its legs.

They laughed and laughed and Agustin joked, “I need someone to get me a green card.” They exchanged phone numbers.

With their plates clean, his father said a quick goodnight before heading to bed. It was past eleven at night yet his mother stood up and scrubbed the dishes with an escobeta. Agustin sat idly like a parishioner waiting in a confessional. It wasn’t as if he was incompetent when it came to household duties. María had taught her sons at a young age how to thread a needle, use a broom, and cook meals like chiles en nogada.

“In case you marry una floja who does nothing,” she had reasoned.

When Agustin had dropped out of university, he had picked up a job working at a taco truck in downtown Tijuana as phone calls home became as infrequent as a snowstorm in the Chihuahuan desert. He worked side by side with Ramon who was at least a decade older.

Drunk patrons frequented the truck and the two men often overcharged, keeping the extra money for themselves. Other tricks they used were buying a pack of tortillas on their own. Agustin learned there was a way the spit of meat could be sliced a certain way to make it last even more. At the end of each night, Agustin and Ramon ate two orders of tacos without spending a peso from their own pockets.

The novelty of being in Tijuana and working his first official job had worn thin like the soles of rubber shoes. Agustin packed a duffel bag with what little clothes he had and did not pay that month’s rent.

Adrianna SampedrofictionStory of the Week

“The quality is perfectly maintained at a level somewhere around the celestial. Each note is a work of art crafted to outlast the centuries.”
Things you never knew about the internet: James Cameron is unsurpassed as a blogger on stained glass.

I Will Grow, I Will Bear Fruit

"This is a novel that dwells in and grasps at the ephemeral..." Jamie Osborn reviews Payam Feili's dream-like "I Will...