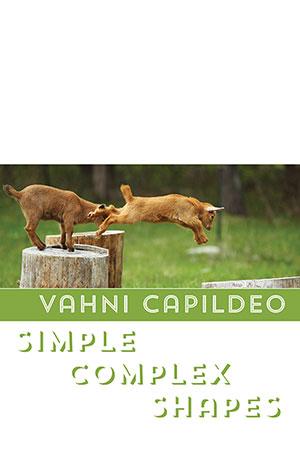 Normally when I read poetry on trains, I feel the urge to read aloud and make the whole carriage listen. Reading ‘Simple Complex Shapes’ on the train, as I did when I read it first, I wanted to pass the book on to the next passenger in silence, then watch their face change. Not because I felt the poems should be read silently — just the opposite. There is an amorphous quality to the words in ‘Simple Complex Shapes’: they refuse to stay put. I knew that when the words were spoken they would slip away from my grasp or change shape, move from seemingly simple to complex and perhaps back again. Even reading the poems to myself was dizzying; feeling the words rock and jolt and glide away into the movement and noise of the train would have been almost unbearable.

Poetry, like music, does literally move when read aloud. The words, after all, are vibrations, waves transmitted from mouth to ear. What is remarkable about Vahni Capildeo’s writing is that the words manage to do this on the page as well as out loud. ‘Simple Complex Shapes’ can be taken as a sequence of poems or one long poem describing a series of flights and falls from the moment of a touch in the dark through a day or days, a tangle of time, back into a dreaming sleep. I found myself switching between the two interpretations as I read until I realised that trying to settle on one or the other was irrelevant. The poem/poems experiment with form; they/it can be read in three directions at once, or more. Words are crossed out only to insist all the more on being seen. This is not just an effect, a trick for the sake of it. When “eyes / call out to find out if to call” and the visual struggles out to become the audial, we feel that there is, in the act of calling, a flash of connection between the eyes/voice and whatever it is they reach out for.

Yet that call is also a question that immediately retreats: “if to call”. Many of the poems in the pamphlet deal with those sliding moments between people that are at once vibratingly intimate and hesitant: in “sudden and gradual breaks / to a changeless state”, there are both breakings out and fractures. There is a sense of relationships suddenly and gradually breaking; part of the cause and at the same time part of the effect is that the boundaries between people seem to blur.

Inconvenient body
I awoke to you,
and, like an architect
mad for steel and glass,
clad you, raked you high—
one prize fits all—
moved out

Whose body is this? It’s an effect like looking through a train window, seeing the people on the platform outside, very close and yet very distant as they begin to move — and then seeing the translucent reflection of your own face or of other passengers in the carriage, like ghosts.

It is sometimes difficult to know where to focus reading ‘Simple Complex Shapes’:

you are not
hillside
species recollected
above
bright clouds
The poem/poems experiment with form; they/it can be read in three directions at once, or more. Words are crossed out only to insist all the more on being seen.
Species of hillsides are perhaps species living on hillsides — and then they are above the clouds, while “bright” seems disconcerting even if we would want think it is a positive word. Reading the poems can be like feeling our way through a darkened room, with all our senses heightened, and catching occasional glimpses of light that leave us illuminated and disoriented. Or like going through a tunnel on a train, emerging briefly into a shining view, then plunging back into darkness.

Maybe this has something to do with the way time seems not, for Vahni Capildeo, to be linear. “They had words,” one poem begins, “There were words between them. / They had words with each other.” In a sense those words still exist between them. “And these words / overwintered”, we read later in the poem: the words survive, nesting (even if it is to fly, as migrating birds, with the change in weather) or, in another striking metamorphosis, force

“Makeless” recalls medieval lyrics and verse (Vahni Capildeo spent time as a researcher at the OED and frequently invokes the powers of words’ history). It can mean something equivalent to “matchless”, so flawless as to be unrivalled, pure. When this becomes “a pair”, the simple doubles before our eyes into the complex — a beautifully flowering moment of connection.

“We feel obligated to hide ourselves, and in general, we’re just plain cruel to each other.” Madeleine Lee, our Author of the Month, talks to Sauleha Kamal.

"Why not take a hot iron/ to my forehead and make it/ permanent..." Weekend Poem, by Erum Khan.