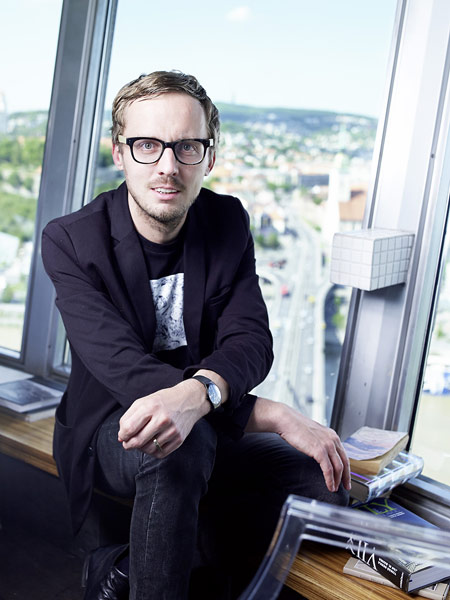 Michal Hvorecký is the author of seven books of fiction that have been translated into five languages (German, Italian, Czech, Bulgarian and Polish). He studied art history in Nitra and was a fellow at the International Writing Program at the University of Iowa. He works at the Goethe Institute in Bratislava and is a contributor on culture and politics to various daily papers and magazines in Slovakia and Germany. He lives with his family in Bratislava. In the latest installment of our Author of the Month series, he talks to Casey Harding about working with translators and about writing and working in Bratislava.

You spent three years with Eva Hudecová and Mark Lencho translating ‘Danube in America’. How did that process work and what you have learned from the undertaking?

Well, to put it right, the two of them were translating, I was just occasionally commenting and answering their questions.  They did an awesome job. I deeply appreciate their work and passion for it. I love translating, and that’s why I also understand how difficult and demanding the job is. They both have a deep respect for my original text and a deep love of their own language, and always managed to find an equivalent. Through this translation, my language was enriched, and my world as well. And I had a chance to meet two wonderful people. They are my underpaid and unsung heroes.

We recently ran an interview with Sebastien Doubinsky, a French author who translates his own work, and he mentioned that, “…if you read closely and compare the two versions of the same novel I’ve written, I think you might be shocked by the liberties I am taking with the original text! But that is because the second one becomes a new original, if you want, another text altogether.” Is this the case with ‘Danube in America’ and would you consider it the case with every translation? Given the vast differences between different cultures would there ever be a time to have a strict, literal translation?

That is partly the case with ‘Danube’. In the English version we tried to keep really close to the original manuscript. The German edition, for example, is almost ten percent shorter. Also, due to German grammar and syntax, we tried to short the German language edition, otherwise it would be some 40 pages longer. That is almost always the case in German when translating from the Slavic language: less is better. I am open to the editing of the English translation as well, but the process should include the US publisher. It is the book about US people in Europe among other things. We had to slightly change and explain some facts to the German-speaking readers as well.

Would you feel comfortable handing over a book to a translator or do you feel that the author needs to be a part of the translation process?

Depends on the approach. Luckily I am still alive and often online, so the translators can send me questions and I am happy to answer them. But I also worked with an Austrian translator who just sent me the final version for the proof reading. Every good translator has his own method – respecting the author’s personal style. What matters in the end is the text only.

You talked at length about the struggles of being a Slovak writer in an interview you did with Literalab in 2011. Have you seen any changes in the past fours years? Do you think that your own work has helped bring more Slovak writing to different countries?

I don’t want to complain, especially not abroad. I don’t expect anything from the Slovak state. I am just happy they don’t censor me. Recently our prime minister protested against my text during the general assembly of his party, so I am ready for things to get worse. Most of our politicians hate the journalists and writers and basically all critically thinking people. For me it is enough when they leave me alone. Probably few people in Germany and Austria discovered, thanks to my readings, that Slovak language and literature even exist. I don’t have to explain anymore that I don’t come from Slovenia, or Slovania or any other place starting with an ‘S’. I try to promote other Slovak writers, but it is still difficult to get them published because we hardly have translators for their works, not to say publishers…

In that same interview you said that ‘Danube in America’ is, “…more realistic. It’s much more based on my own experience.” Did you spend time working on a boat? What experiences helped to shape your novel?

I worked for two years as a tour manager and interpreter on river cruises for American tourists in Central Europe – these were crazy encounters indeed! It is extremely difficult to live as a fiction writer in Slovakia. Public reading are not paid, honorariums in the papers are poor, publishers just try to save the money… I did this job to support my writing. I hope I will not have to do it again. After two years I thought either I will soon be insane or I will try to write a novel about this experience. I decided for the latter. I was a freelance writer afterwards for couple of years. Now I work in the Goethe Institute in Bratislava, where I run the library and the literary programs and I love the job. I have family now and two small kids, so I want to be at home. I spent too many years touring Central Europe on public readings.

As a follow-up question, do you find yourself using more of your own experiences to write your works?

Definitely. The older I am the more I do. I still learn a lot. I read more and write less. The last couple of months I do hope the world around me will not turn into some noir Eastern European dystopia. There is so much hate spreading around again. It is not new. I am 38 and this is third time I have experienced real extremism in the mainstream discourse. My country is turning into a police state and nobody cares, people just continue with their Christmas shopping…

Rowland Bagnall on ‘the art of not quite saying what you mean’ in Ben Lerner’s ‘Leaving the Atocha Station’.

Kingship versus Kinship: Part I

"It is wholly appropriate that a contemporary, post-9/11 retelling of Sophocles’ story be set in the context of a recent...