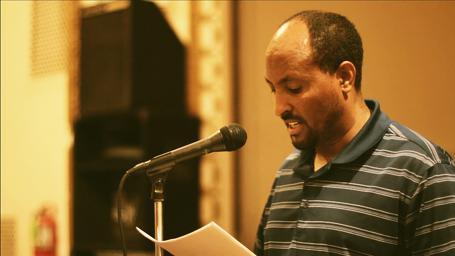 Yes, let’s be exiled,
far from our families,
our beloved country,
our villages, our rivers.

Let’s go! let’s rush!
yes, let’s be exiled,
Mary did it, trudging
over the deserts
with Jesus in her arms.

Then
let’s forget refuge forever
and start thinking of going back!
Let’s build imaginary houses
for our hearts to settle in advance
and fill them with wealth and blessings,
until the cows come home.

Alemayehu Gebrehiwot was born in 1962 and studied drama at Addis Ababa University, then worked at the Ministry of Culture before emigrating to Maryland, USA, in 2000. His Amharic translation of Oscar Wilde’s play ‘Lady Windermere’s Fan’ was staged at the Hager Fikir Theatre in Addis Ababa. His collection of poems in Amharic, ‘Etalem: Sebseb Getemoch’ (The Endeared Sister) was published in 2006.

Getatchew Haile is an Ethiopian-American philologist, widely considered the foremost scholar of the Ge’ez language alive today. His awards include a MacArthur Fellows Program “genius” award and the Edward Ullendorff Medal from the Council of the British Academy.

Editor’s note: This translation first appeared in Diaspora 15: 2/3, 2006: ‘Amharic Poetry of the Diaspora in America: a Sampler’

“The coal in his eyes, in his ears, on his lips, in tears/ that cleansed his corneas, in fingernails. The coal…”
Poem of the Week (9 July), by Somendra Singh Kharola.

A selection of poems from Ethiopia's best-loved poets of the 20th century, including work by Kebede Mikael, Mengistu Lemma, Gebre...