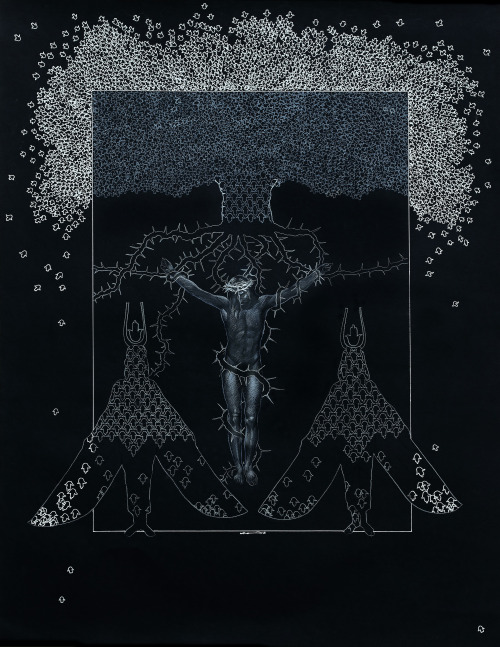 ‘Shadow notebook’ was the first book published by El Cuervo, one of the most interesting independent editorial projects in Latin America at the moment. Its appearance couldn’t have been luckier or better-timed. The editor, Fernando Barrientos, was so dazzled by Julio Barriga’s book of poems he felt the need to create a publishing house to see the verses in print. He didn’t think about how to finance the book, about distribution or earnings — in Bolivia the profession of editor has something suicidal and romantic about it — but rather about the urgency of sharing the lethal words of this “crazy boy prematurely aged in dissolution and disillusion”.

Barriga writes from atrocity and the abyss, from unending night as he dances with his demons.
Reading Julio Barriga is an overwhelming experience. We’re confronted with someone who, like Rimbaud, writes poetry from the absolute disorder of his senses, from wretchedness and madness and nearness to death. Someone who uses his body as the awful site of experimentation with “substances that induce states of terror or joy bordering on death” (“we have cleaned our asses / with our brains”). A poet-builder who saves his revelations “for when I write an infinite poem / about the evil of beauty” and each day faces inescapable “shapes and terrors / swiping their claws”, a punk “whose age nobody knows, dedicated to perfecting / an immature childhood”.

Barriga writes from atrocity and the abyss, from unending night as he dances with his demons. Where does such devastation come from, he makes one ask, as if an answer existed. How does one end up with his gaze fixed on the abyss? And above all, how does one survive the gaze of that destructive Eye with Barriga’s astonishing lucidity? The poet has a gorgeous stoicism, a declaration of principles he reveals in his verses “when there is nothing but the flight of the fall / one learns the music of the wind”. Barriga reminds us that poetry is dangerous and that one must live with courage. That we are hopelessly alone and lost and the only possible answer is to cultivate the ethic of solitude, and learn how to be elegant in hell: “I read feeling my way forward, like a blind man / a painting that looks exactly like / what you wanted to express: / my home has always been bleakness. / We are such strange people / corroded by the memory of beauty.”

Liliana Colanzi is the author of ‘vacaciones permanentes’ and ‘la ola’. This year Dalkey Archive Press will publish an English translation of her work.

“I got the sense that poetry is much more a part of life in Pakistan than it is in the UK…” Vicki Husband, The Missing Slate’s October Poet of the Month, in conversation with Jamie Osborn.

"Literature, in the Dadaist gesture of the author, is a useless project that must be questioned..." Edmundo Paz Soldán pays...