Reviewed by Constance A. Dunn

— Neil Gaiman,  ‘The View from the Cheap Seats’ (HarperCollins Publishers, 2016)

“To begin with, a confesssion. I hate writing speeches.”  – From ‘The View from the Cheap Seats’ 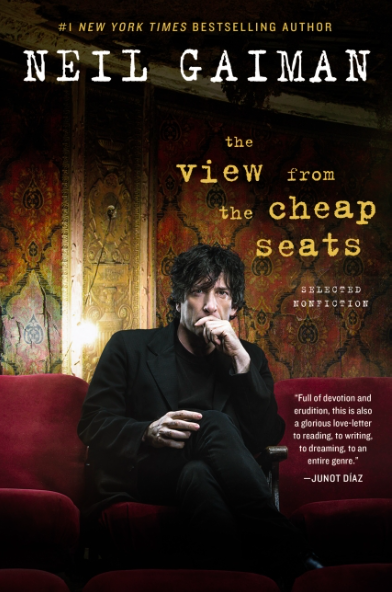 Neil Gaiman, the literary master of horror fantasy and modern myth, is also a sought after public speaker and essay writer. His talks to graduating students, fellow sci-fi writers, fans, academics, comic book creators, monsters, superheroes, and outcasts are lauded on the Internet, often quoted, inspiring a community of writers and readers through sites like Brain Pickings and YouTube clips. And now, most likely after some prodding by colleagues and friends, these speeches and essays are compiled in ‘The View from the Cheap Seats’.

It’s a collection of short speeches, talks, essays, and introductions organised thematically, i.e. comics, film, people I know, etc. As such, it’s not an engrossing read that keeps you up late at night, but I imagine that’s not how the writer intended it to be read. It’s a book to pick up and thumb through, stopping at titles that pique your interest. A creative may keep it on their desk to remind him or herself why they do what they do in the first place. Because that’s what the book does, it puts creativity as a profession into perspective. Its format makes it a good plane/train ride read. It would be a lovely addition to a waiting room coffee table, showing that the professional with whom you have an appointment has smart taste. It is also a fan book, an edition that any true Neil Gaiman fan would include in their library, not for the compelling stories, but to exhibit their devotion to the man as much as the writer. Followers of the sci-fi, fantasy, and comic book genres will relish the stories of meeting such and such and so and so. Although I’ve lost myself in stories from these genres from time to time, I didn’t recognise many of the names mentioned. I chided myself for my ignorance as I read Gaiman’s accounts of meeting this very well known sci-fi writer, or that insanely talented comic book artist, but I also enjoyed learning about these people for the first time. Putting a name with an iconic character or series made me feel whole. Fans in the know won’t have this problem, nor will they have the pleasure of discovery.

This isn’t to suggest that the casual Gaiman reader, like myself, doesn’t get something out of the collection. The speeches are finely written, pointed at times, self-deprecating — “It seems somehow wrong for so much talent to be concentrated in one place, and I am fairly sure the only reason that no one has yet risen up and done something about it is because he’s modest, sensible and nice. If it was me, I’d be dead by now…” — charming, sometimes bold, and at their best they descend into moments of horror or madness before a final smirk and a polite ending. They are, each of them, a lesson in writing a good speech. None are rambling, although I get the sense that Gaiman would be the type to accuse himself of being rambling, but there isn’t a wasted word in any of them.

Personal anecdotes abound; Gaiman as a precocious child whose favourite pastime was to riffle through the thematic catalog at his local library; Gaiman as the cocky teenager banging on a comic book shop door; Gaiman as the young journalist. At his best as a writer he may still be that smart child in the library with the ingenious cataloging system excitedly moving from shelf to shelf looking for new ideas to turn into his own stories. Perhaps at his worst he is what he describes above, “sensible and nice”. Fortunately, in an incredible stroke of luck, or with the gift of clarity, Gaiman never lost the enthusiasm of the child in the library. In the collection he defends free speech and free thought again and again, especially the free reading of children. I imagine he’s gone up against a publisher or two saying his stories are too dark, too scary for kids. But it was a waste of their breath, because that child in the library learned how to defend himself by reading about all those heroes and anti-heroes in the dark stories of his youth.

The essays are more fun to read than the speeches, partially because there isn’t the constraint of a live audience who will eventually have to listen to them. These include essays as intros for books, or features in magazines. They leave behind the pleasantries of the public talks and use more of Gaiman’s signature style. When I got to the intros the writer penned for new adaptations, annotations and collections of the classics, i.e. Poe, Kipling, H.G. Wells…Then he started speaking my language. The feelings he had while reading Kipling’s short stories I have also felt, as well as the irritation with having to explain that you don’t have to agree with the politics of a writer to enjoy the stories. I read through these intros talking out loud as if in conversation with a friend with whom I share an innocent love of the macabre.

He is honest in the essays, gives credit where it is due, and takes it away again. A spade is called a spade, not a diamond. He writes things that ring with a clear, bell-ringing truth that’s difficult to argue with, like how he writes to find out about something, not because he already knows about it. The novel ‘American Gods’, for example, which helped him understand American myths after living Stateside for six years. The same tone is all over his website — straightforward, tongue-in-cheek. Again, an occasional fit of madness creeps in. On the one hand he is natural and no bullshit, he offers advice and genuinely seems inclined to help and inspire creatives, while on the other there is an attitude of “do what you will with this, it’s none of my business. Now, let me write”. When all is said and done, for all his love of myths, Gaiman seems a humanist. Perhaps it is only through the button eyes of a perceptive monster that he can truly express his admiration of humanity without sacrificing the truth of our shortcomings.

The culminating effect of this collection is of a tribute to an art form, a process, a profession from the voice of a man of erudition, experience and common sense. Gaiman may hate to write speeches, but he’s good at it, and I suppose he deserves our thanks making the sacrifice and compiling his nonfiction when he would rather be writing stories of wonder, fear and magic.

A ‘devastating’ exploration of poverty by one of Hungary’s finest writers, reviewed by Ottilie Mulzet.

Do you believe in doctors?

"...Now they peer into the darkness/ and sort out right from that which wronged you./ They find an offender..." Poem...