The book’s unusual title, ‘Opisanie świata’, which in Polish translates as ‘description of the world’, is also the Polish title of ‘The Travels of Marco Polo’. Written as a sort of fictional travelogue, jumping from one richly recounted vignette to another, mixing third-person narrative, letters and diary entries, and even a bit of poetry, the book follows Opalka and Bopp on a transatlantic journey from Poland to the Amazon on the eve of World War II. Their trip is described through interesting degrees of intertextuality, alluding to Brazilian authors of that time, and range from the absurd and hilarious, to sentimental and sweet. This longer format has allowed Veronica Stigger to be just as daring, surreal and funny as in her previous work, but also has given her room to create a fascinating and multifaceted story that spans decades of history and an ocean. The result is a stunning and delicate debut novel that feels at once contemporary and classic, a love letter to Brazilian modernism. 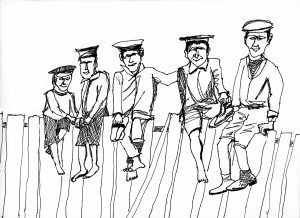 He was a squat man, with arms and legs like little logs. Round face, encircled by thick strands of dark brown hair cut in the shape of a helmet — a strange haircut, further accentuating the roundness of his face. The underside of his protruding belly was not contained within his crimson shirt: it sprang forth from below and through the gaps between the buttons created by the pressure of his plump body under the form-fitting fabric. The only thing gaunt about him was his mustache: thin, long and with the ends slightly turned upward. It was not the fashion, nor would it ever be, but that was how he liked to wear it. Although it was hot that August, over the crimson shirt and light linen trousers he wore a long, garishly printed silk kimono, so long it dragged the ground, bringing with it dust, sand, pebbles and any other detritus it might find along the way. He was lugging four suitcases of different sizes: one in each hand and one under each stocky arm. Upon seeing Opalka seated on one of the station benches, engrossed in his newspaper, he grinned. He hastened his step, tripped on the hem of his kimono and came crashing to the ground just a few feet from the bench. As he fell, the four suitcases shot forward, clattering around Opalka’s feet and knocking over Opalka’s small trunk, which, in turn, toppled his basket. His lemons — one dozen of them — all rolled out. One of them spun off toward the tracks, while the others stopped beneath the bench between Opalka’s legs and around the basket and trunk. The man, having leapt to his feet, dived to the ground, as if into a swimming pool, trying to capture the lemon. But it was in vain: his arms were too short to reach it and the lemon finally rolled onto the tracks. Opalka, who had been following the scene in astonishment from behind his newspaper, then began gathering up the remaining lemons. But the man was already on his feet again, dusting off his kimono, and held up one hand to stop Opalka. Disobeying him, Opalka lay the newspaper on the bench beside him, and bent down. When he went to grab one of the lemons that was closest to his left foot, the man again gestured with his hand and shouted in German:

Surprised, Opalka stopped, looked at the man and sat up again, giving up on the lemon. The man smiled at him and, limping, picked up the basket and placed the eleven lemons, one by one, back inside. Opalka returned to his newspaper. After filling the basket, the man lifted up the small trunk, whacked it with his right hand to remove the dirt and leaned it against the bench, next to Opalka’s feet. This distracted Opalka from his newspaper for a moment, and he looked sidelong at the man. The newcomer was now arranging his own suitcases. He organized them according to size, directly in front of the bench where Opalka was seated: the smallest one at Opalka’s feet and the largest in front of the place he had chosen to sit. Finally, the little man took a seat beside Opalka, who shot him another sideways glance. The man studied every inch of his kimono and clicked his tongue now and again against the roof of his mouth, shaking his head from side to side, cross. Opalka could no longer pay attention to the newspaper. He watched the man who, after clicking his tongue and shaking his head from side to side, bent down at an angle toward the ground, reaching for the smallest of his suitcases. As he had not risen from his seat, his body brushed against Opalka’s knees. Opalka clutched the newspaper to his chest to keep it from being crumpled by the man’s head, as he, in turn, rummaged around and around in his suitcase, grunting and sighing the entire time. Not finding what he was looking for, he got up and bent down in front of it. He again started rummaging around, sticking his head partway inside the suitcase. Opalka shook his paper, as if to smooth it, and went back to reading, but once again he was interrupted, this time by a jubilant cry from below:

Opalka could no longer pay attention to the newspaper. He watched the man who, after clicking his tongue and shaking his head from side to side, bent down at an angle toward the ground, reaching for the smallest of his suitcases.

Opalka peered once more over his newspaper and there was the man, now standing, holding a knife in one hand and, in the other, an apple, like a trophy. He sat down beside him and, before eating, turned to Opalka and asked him in Polish:

To which Opalka, taking his eyes from his paper once again, said, also in Polish:

“I beg your pardon?”

The man frowned, offered the apple to Opalka and repeated:

Opalka lowered the newspaper, looked at the man and replied, again in Polish:

“I’m sorry. But I don’t believe I’ve understood you.”

The man heaved a deep sigh and looked around, as if searching for someone who could help. He looked at his little suitcase and then down at his hands, now occupied by the knife and the apple. Realizing the man’s dilemma, Opalka asked him, still in Polish:

The man turned to Opalka and frowned again. Unsure, he handed him the apple, waving it gently, making it clear with this gesture that he was offering Opalka the fruit. Pretending not to see the apple being offered to him, Opalka repeated:

"A moment of seeing and speaking to each other through and against the fences..." The Missing Slate's February 2017 online...