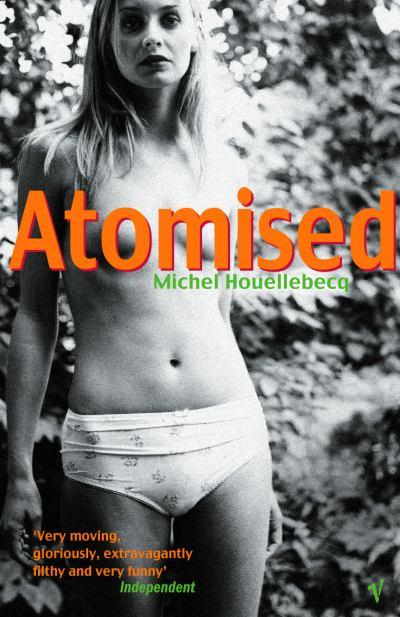 Judge any book by its back cover and you could be forgiven for thinking you’re about to read a work of inimitable, once-in-a-generation genius. Turn over Atomised, the English translation of Michel Houellebecq’s Les Particules élémentaires, (possibly in an attempt to avoid staring at the half-naked woman on the front) and you find the usual glowing reviews. Anyone willing to trust the opinions of Time Out must accept that the novel is ‘totally mesmerising…Compulsory reading.’ If, on the other hand, you choose to believe The Independent, Atomised is ‘compelling… haunting.’ Julian Barnes (important enough to be named) describes it as ‘a novel which hunts big game while others settle for shooting rabbits.’

The difference here is that the hyperbole is justified. Michel Houellebecq may strike certain readers as a nihilist, a racist, a misogynist, a pedlar of the cheapest of literary cheap tricks, but he is without doubt one of the most fascinating contemporary writers in any language. Atomised is a work of staggering ambition, aiming to imagine what Houellebecq refers to as ‘a metaphysical mutation… a transformation in the values to which the majority subscribe’ by inhabiting the mind of ‘a first-rate biologist and serious candidate for the Nobel Prize’ and compressing numerous lives into fewer than four hundred pages. Houellebecq sets himself the intensely serious task of envisioning a future in which both religion and science have been usurped as dominant paradigms, and ends up producing a novel as readable as any airport thriller.

Not that you’d want to take Atomised with you on your next plane journey. It happens to be relentlessly gloomy: the first page informs us that the protagonist ‘lived through an age that was miserable and troubled… haunted by misery, the men of his generation lived out their lonely, bitter lives.’ By the end of the first chapter, Michel Djerzinski has abandoned his job, organised a lifeless ‘sham’ of a leaving party, and returned home to find his canary dead. He dumps it in a rubbish chute, has a nightmare in which the bird’s intestines are ripped out by huge worms ‘armed with terrible beaks’, and has to swallow three Xanax tablets before he can get back to sleep. For the rest of the book, his condition deteriorates. Just in case the more or less inexorable downward spiralling of one life isn’t enough, Michel has a half-brother, Bruno, who ends the novel in a mental institution after the suicide of his girlfriend.

At the heart of Atomised is a vision which recalls Deleuze and Guattari’s idea of humanity as a mass of ‘desiring machines’, with desire the agent which produces ‘reality’. Houellebecq’s ‘metaphysical mutation’ effectively involves the elimination of desire, creating a brave new world in which ‘a new, rational species’ relies on cloning rather than ‘sexuality as a means of reproduction.’ Sex and death are inextricably linked: Michel Djerzinski establishes that ‘all species dependent on sexual reproduction are by definition mortal’; the ‘new species’, independent of sexual reproduction, is by definition immortal.

Only a small section of Atomised is devoted to the implications of that immortality. Superficially, the novel seems to deal in abstractions, but it remains grounded in the details of day-to-day lives, relishing the mundane. The world it depicts is unflinchingly brutal: Michel recalls watching a programme called The Animal Kingdom, observing how ‘Snakes moved among the trees, their fangs bared, ready to strike at bird or mammal, only to be ripped apart by hawks.’ Animals are ‘slaughtered’ or ‘dismembered and devoured’, their days spent in ‘abject terror.’ At times, Houellebecq’s view of the world is pessimistic to the point of self-parody. On other occasions, it contains an awful ring of truth, as when he recycles an idea from Whatever and examines the brutal nature of ‘free market’ sexuality, a system which concentrates power among a select few and leaves the rest with little or nothing, abandoned to ‘calmly observe the decline of [their] virility.’ Neither Michel nor Bruno belongs to the sexually satisfied 1%: Michel half-heartedly browses the lingerie section (‘Sensual Suspenders!’) of his 3 Suisses catalogue, while Bruno pursues the shadow of a dream of liberation at the ‘Lieu de Changement’, which pompously prides itself on being ‘open to new spiritual ideas.’

Relief is never more than temporary – Bruno eventually enters a relationship with Christiane, but Christiane becomes paralysed from the waist down after an incident in a ‘club for couples’ and commits suicide when faced with the spectre of her physical decline; Annabelle, the great love of Michel’s life, dies of uterine cancer shortly after becoming pregnant with his child. Atomised concludes that, in our current ‘miserable and troubled’ age, complete happiness is impossible. Huxley’s Brave New World seems to be an obvious point of comparison: the question posed by both books is not ‘can we attain true happiness?’ but ‘do we really want to attain true happiness?’  Huxley’s future society and Houellebecq’s new species are both perfectly content, but the worlds they inhabit seem sterile (in more than one sense) and devoid of meaning.

Towards the end of Atomised, Michel investigates ‘this space of which [we] are so afraid’ and reaches a conclusion which appears to offer some hope of transcendence. He concludes that ‘Love binds, and it binds for ever… All that exists is a magnificent interweaving.’ The idea of love ‘binding’ is deeply and deliberately ambiguous, but Houellebecq appears to let Michel ‘make his peace’ in the final weeks of his life, taking ‘long, dreamy walks…with only the sky itself as witness.’ The cruelty of The Animal Kingdom can, perhaps, be forgotten, if not overcome.

Atomised may sound like the type of book you wish to avoid – heavy on theory, filled with unpalatable opinions (for example, one of the characters sees Islam as analogous to Nazism), perhaps overly graphic. Instead, it is the type of book everyone should read – ambitious, innovative, filled with ideas which are genuinely challenging, perhaps even a thing of beauty. It demands to be judged by no standards other than its own.

Jacob Silkstone, besides being Poetry Editor, blogs about books and the publication industry at http://aloneinbabel.themissingslate.com.

“The thirsty/ will pay her ten bucks for a Smirnoff,//five for a lukewarm Corona. The faint/ stagger out to the sunlight…” Weekend poem, by Laurie Barton.